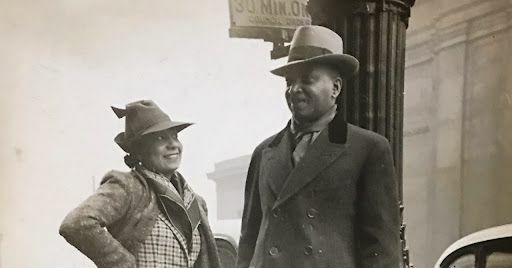 With such a treasure trove of history, it was a matter of time before museums swooped in.

And now a fourth of the Bronzeville estate of Associated Negro Press Founder Claude A. Barnett and his legendary actress/socialite wife Etta Moten Barnett is en route to the Smithsonian National Museum of African American History and Culture.

That leaves plenty remaining for this one-of-a-kind estate sale to be conducted Sept. 18-19, at an undisclosed Bronzeville location. Offering a journey back in time — and a peek at lives once considered Black royalty — the sale is being handled by Estate Sale Goddess, a rare Black-owned firm operating in the lucrative estate liquidation industry.

There are of course the Swarovski, Waterford and Cartier crystal, the diamonds, gold and Tiffany; St. John, Prada, Yves St. Laurent and, other designer haute couture of decades past.

But then there’s the never before seen ephemera and historic artifacts of a trailblazing couple, handed down through two subsequent generations.

It is she who has retained Estate Sale Goddess to liquidate the assets of three generations.

There are letters, documents and photos from or with U.S. presidents — from Lyndon B. Johnson to John F. Kennedy, Richard Nixon and beyond.

There are photos and drawings by some of the world’s most noted Black artists, William Edouard Scott to James Van Der Zee, Richard Barthe to DuSable Museum of African American History founder Margaret Burroughs.

There are first-edition manuscripts and books by literary giants, like the mint-edition 1922 “The Negro In Our History,” by Carter G. Woodson. There is enough art to fill a gallery, particularly from Africa, where the couple traveled extensively and where Moten Barnett at one time served as ambassador, representing the United States at independence ceremonies of Nigeria, Liberia and Zambia.

Claude Barnett, who founded the Associated Negro Press in 1919, along with Robert Sengstacke Abbott, who founded the Chicago Defender in 1905, and John H. Johnson, who founded Johnson Publishing Co. in 1945, were considered among the most influential African American media entrepreneurs of the 20th century.

The Barnett artifacts include an original set of Ebony magazine playing cards.

There are many Broadway stage bills, including one from the 1942 “Porgy and Bess,” Moten Barnett’s signature role that George Gershwin wrote with her in mind.

Her rich contralto voice off-screen made waves in two 1933 films, leading to her barrier-breaking, on-screen role in a third 1933 film, “My Forgotten Man.” It was the first time a Black actress had appeared in a role other than maid.

And her rendition of the title song so moved President Franklin Delano Roosevelt, that in 1934, she was invited to sing for his birthday — again breaking barriers as the first time a Black woman had ever performed at the White House.

She also appeared in the 1933 “Flying Down to Rio,” which debuted the Fred Astaire and Ginger Rogers dance team.

Proprietors Lynne and Ty McDaniel, who also own an antiques shop in Wicker Park, An Orange Moon, have been in the estate liquidation industry since 2009.

The couple is preparing for a tsunami of history lovers that will converge on the sale.

“This is the most important collection that we have ever seen in our lives, and we don’t know if we will ever top this,” Lynne McDaniel said of the treasures that once filled the Barnett/Ish family’s three-story Victorian mansion on South King Drive.

The couple has handled some pretty historic collections over the past 12 years.

There was the estate sale of Johnson Publishing Co.’s longtime editor, Lerone Bennett, and the one for Madeline Murphy Rabb, the first African American and first professionally trained artist to head the city’s Office of Fine Arts, under Harold Washington.

They handled the estate of Willye Tillman, the first African American nurse anesthetist in the state of Illinois, and the one for Jesse Owens, the track and field icon who won four gold medals in the 1936 Olympic Games, ranked by ESPN as the sixth greatest North American athlete of the 20th century.

Other historic estates they’ve handled include that of Chauncey Eskridge, the civil rights attorney and member of the Tuskegee Airmen who represented such icons as Martin Luther King Jr. and Muhammad Ali, successfully arguing the U.S. Supreme Court case Clay v. United States, which overturned Ali’s conviction for refusing to serve in the Vietnam War.

“You feel so humbled being entrusted with this history,” said Lynne McDaniel.

“I always feel like I am walking back in time, an archaeologist, anthropologist and sociologist all in one. Sorting, photographing and cataloging items that haven’t been seen or touched by human hands for decades feels like you are on an archeological dig.”

The couple were raised in Englewood and were previously mental health practitioners. Their mutual love of antiques led them to open their shop.

Claude Barnett’s Associated Negro Press became the nation’s largest and longest-lived news service to supply content to Black newspapers across the United States for nearly a half-century, with stringers in the West Indies and Africa. He would serve as special assistant to the U.S. secretary of agriculture from 1942-52.

On her 100th birthday, Sidney Poitier sent a letter: “Dear Ms. Moten, I need only to close my eyes for a moment and I am back in the mid-nineteen forties ... rehearsing for ‘Lysistrata,’ starring ... the most incredible, amazing, voluptuous, dignified and sensual actress to grace the Broadway stage in my lifetime — the incomparable Etta Moten Barnett.

“I would like her to know that I had the biggest damn crush on her that I ever had on any woman I had ever known. I send my love, respect and appreciation for all she has meant to me and to the world,” Poitier wrote.

Ty McDaniel said it is particularly gratifying to be retained to liquidate historical Black estates, because he and his wife know the emotional ties and value placed on them by the Black community and Black collectors.

“I’ve been to some sales where they’re selling Black historic posters, some of them worth like $2,000, yet they were going for like $5. The person doing the sale didn’t see the value. I think Black people need to tell Black people’s stories. It’s told more thoroughly,” he said.

“We encourage Chicagoans to come out. People need to see this. It’s a wonderful reminder that Black people have been doing great things for a very long time, and that our accomplishments did not begin with the civil rights movement. We were doctors, lawyers, entrepreneurs, and have always had a strong middle class, wealthy and elite.”