A team of lawyers and opposing legal parties led by a court-appointed advocate commissioner on Friday conducted a videographic survey of the Maa Shringar Gauri site located at the back of the western wall of the Gyanvapi Mosque in the Gyanvapi Masjid-Kashi Vishwanath Temple Complex in Varanasi.

The survey was initiated after a local court recently appointed court commissioner Ajay Kumar Mishra to inspect the site, videograph it and submit a report.

The videography would continue on Saturday. Apart from the court commissioner and his assistants, the five plaintiffs and their lawyers, videographers and five members from the Muslim side were part of the survey.

Civil judge (senior division) Ravi Kumar Diwakar had appointed the court commissioner after one Rakhi Singh and four other plaintiffs last April filed a suit declaring that they were entitled to have daily darshan, pooja and perform all the rituals of Maa Shringar Gauri, Lord Ganesh, Lord Hanuman and other “visible and invisible deities within old temple complex” situated at settlement plot no. 9130 in the area of Dashwamedh ward and police station

The plaintiffs had submitted that at the back of the western wall of the mosque, there existed an image of goddess Shringar Gauri since time immemorial. The plaintiffs had also demanded that the caretakers of the mosque be restrained from imposing any restriction, creating any obstacle, hindrance or interference in performance of daily darshan, pooja, aarti, bhog and observance of rituals by devotees of goddess Maa Sringar Gauri at the site of Lord Adi Vishveshwar along with Lord Ganesh, Lord Hanuman, Nandi and other deities.

Along with the suit, they moved an application for appointment of an advocate commissioner to make a local inspection of the site and ascertain the existence of the images of deities Maa Shringar Gauri and others at the plot.

The Allahabad High Court in March dismissed a plea by the Anjuman Intezamia Masajid, the caretakers of the mosque, challenging the order of the civil judge to appoint an advocate as a court commissioner to inspect the highly-sensitive religious complex.

The survey team reached the site after the Friday namaz and apart from minor cases of sloganeering reported outside the mosque, the situation was peaceful. A woman who offered namaz near the premises of the Kashi Vishwanath Temple was evicted by police, who said she was not mentally stable.

On April 26, the civil judge had ordered that the inspection be conducted after the festival of Eid-ul-Fitr. The commissioner’s report would come for hearing next on May 10.

Abhay Nath Yadav, lawyer for the mosque, said the survey started around 4 p.m. and videography of stone slabs was done where they claimed there was an image of Shringar Gauri. Around 5.30 p.m., the court commissioner and the team went to the main gate and said they would conduct videography even inside the mosque, said Mr. Yadav. “We objected saying that there were no clear orders by the court for doing so,” the lawyer said.

Mr. Yadav said that as per local tradition, pooja of Shirngar Gauri was done once a year during Nauratra (Chaturthi).

The suit was only for rights to daily puja of deities inside the premises and not for ownership, said the lawyer.

Shivam Gaur, a lawyer for the Hindu plaintiffs, said the survey started from the western side. “We found some evidence that are commensurate with our case. Things were found as per the map prepared by us,” he said.

Mr. Gaur said they could not enter the mosque due to objections by the masjid committee but expected the videography of the mosque and the tehkhana (cellar) to be done on Saturday.

All the drawings, structure, architecture and artifacts within the plot no 9130 come under the survey, said Mr. Gaur, a point contested by the Muslim side.

Sayid Yasin, joint secretary of the Anjuma Intejamia Masajid, said the videography was being done outside the mosque but in proximity to it. “We had objected to them entering the mosque [for the inspection],” he said. 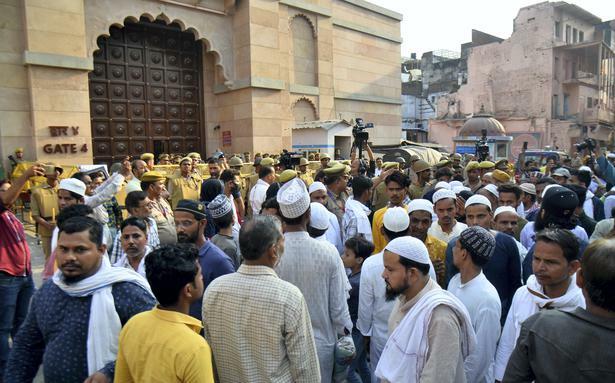 The Hindu
One subscription that gives you access to news from hundreds of sites
Uttar Pradesh: Videography team denied entry, Gyanvapi mosque survey stalled
VARANASI: The survey and videography of the Gyanvapi mosque premises, which began on Friday amid tight security, was stalled on…

VARANASI: The survey and videography of the Gyanvapi premises, which began on Friday amid tight security, was stalled on Saturday,…