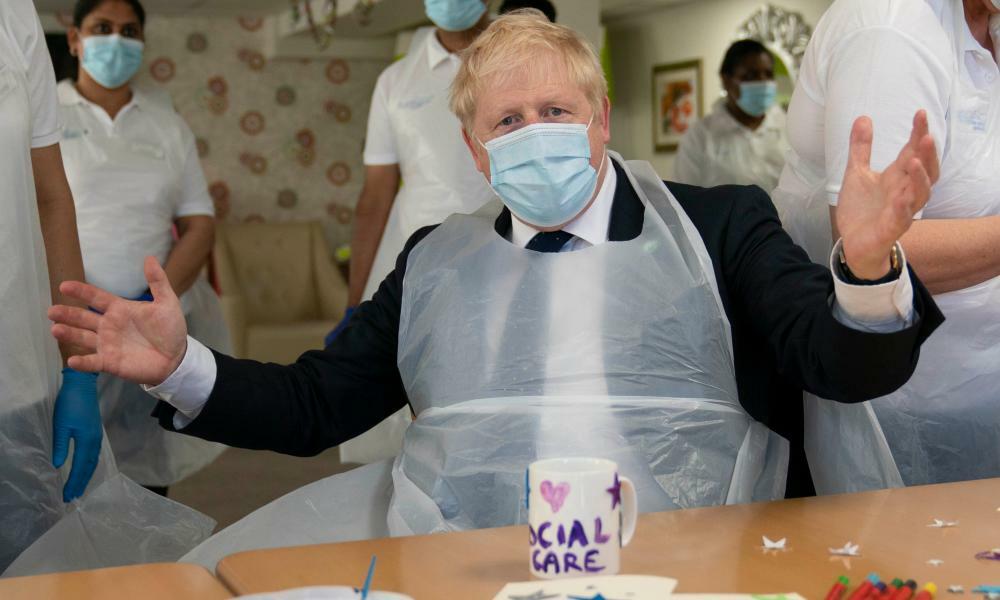 For the Conservative right, nothing is as sacred as protecting the wealth of those who are already wealthy. This is why Boris Johnson, Rishi Sunak and Sajid Javid have broken their party’s 2019 manifesto commitment not to raise national insurance (NI), and will introduce a “health and social care” levy funded through a 1.25% increase in NI contributions and a 1.25% increase in dividend tax, the result of which will be to protect the housing assets of those who end up needing social care.

In England, if you have assets of more than £23,250, you currently have to pay for your social care in full. Tens of thousands of people end up selling their homes in order to cover the costs of their care. Under the government’s new plans, those who have assets under £20,000 will pay nothing for their social care, while those with assets between £20,000 and £100,0000 will be eligible for means-tested support. The government has also introduced an £86,000 cap on care costs, which limits the amount anyone will pay for social care over their lifetime.

But rather than truly fixing the causes of the social care crisis, the Conservatives seem more concerned with protecting the property rights of the wealthy and the inheritances of their children. Raising NI contributions to fund social care will mean that working-age people on median incomes will effectively pay to protect the inalienable right to inherit a home. Moreover, the effects of the social care reforms are highly unequal: how much you lose will depend on where you live.

In many parts of England, where house prices are considerably lower than in the capital, people stand to lose a much higher proportion of their wealth under the new system. For example, a person paying for care whose assets are worth £186,000 would be left with £100,000 under the new cap. If they owned £1m in assets (because they owned property in London, for example), they would be left with £914,000 under the new system. Johnson may be hoping no one notices this untidy fit with his promises to level up.

Another source of resentment is the fact that this new plan only applies to new care claimants. So those who are currently in the care system have no floor (beyond the current £23,250), and no cap on the costs they can expect to incur over a lifetime – even though some will be paying the additional levy that applies to dividends tax.

Much as Johnson’s Brexit deal was a rehashed version of Theresa May’s deal, albeit with better presentation, so are his social care proposals. May also proposed the same £100,000 floor to protect people’s assets from being used to pay for care (although she did not propose a cap on the amount people would pay over their lifetimes). She told Andrew Neil during the 2017 election campaign that people “won’t have to worry that they’re going to have to sell their home during their lifetime”. But the so-called “dementia tax” proved so unpopular that May U-turned on the policy during the election campaign.

On the day Johnson became prime minister, he declared on the steps of Downing Street that he would “fix the crisis in social care once and for all and with a clear plan … give every older person the dignity and security they deserve”. This new social care plan does nothing of the sort. The major problem facing social care is not that some relatively wealthy older people may have to sell their homes. The crisis is really threefold. Around 2 million people are currently denied care due to underfunding and rationing; the standards of care are extremely low for many of the people who do receive it; and those who provide care receive appalling levels of pay and little job security. On top of this, a fragmented and privatised system is reaping huge returns for unscrupulous profiteers.

Despite the hard work and dedication of care workers, there are huge variations in the standards of care across the country. The Care Quality Commission’s latest figures show that more than one in six care providers are not meeting acceptable standards. According to the charity Age UK, a decade of cuts to the social care budget has left 1.5 million older people with unmet care needs. Thousands of working-age disabled people – on whom half the social care budget is spent – don’t get the care they need either.

Staff vacancies in the care sector could rise to 170,000 this year, according to the National Care Association, up from 112,000 last year. This is hardly surprising: 70% of care workers are paid less than £10 an hour and one-quarter of staff are on zero-hours contracts. A lack of staff compounds low standards of care and can have lethal results for care home residents. One recent study by the London School of Economics found that the risk of death from Covid-19 in UK care homes was 13 times higher than in equivalent institutions in Germany care homes. In England, this is largely because of the way care homes are run and operated: the sector is increasingly dominated by private equity companies whose chief aim is to extract profits from caring for elderly and disabled adults.

Ending the social care crisis will mean tackling the low pay, poor standards and profiteering among many care providers. And, yes, it will also mean addressing the catastrophic care costs that can affect some people whose misfortune is to get dementia, when if they suffered from cancer or heart disease in old age it would be treated for free on the NHS.

What is needed is a national care service funded from progressive taxation, free at point of use, with universal coverage, and care staff paid on terms aligned to NHS workers. But where are the politicians who have the vision and passion of Clement Attlee or Nye Bevan to deliver something on this scale?

Certainly not in the Conservative party. As their 2019 manifesto said, “The prerequisite of any solution will be a guarantee that no one needing care has to sell their home to pay for it”. Once that is assured, the Conservatives will rest easy – but millions of people in need of care will not.