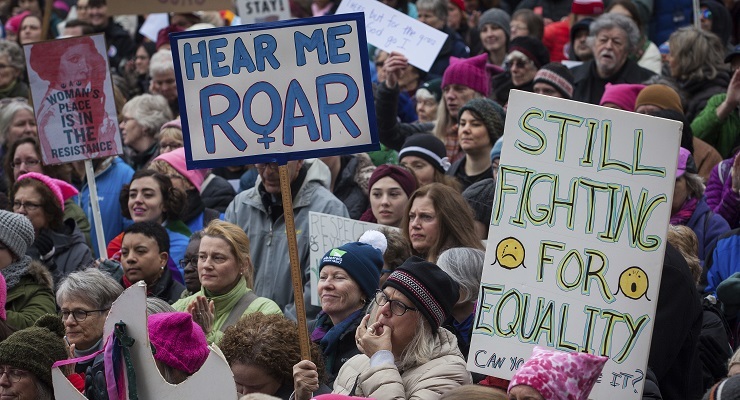 It’s a measure of what a crap weekend Scott Morrison was having that he must have looked forward to Monday and [checks his notes] …launching a women’s safety summit.

Well, this will be interesting, I thought, as ScoMo the God-botherer will surely have some things to say about [checks my notes] …the centrality to violence “of gender inequality”.

Good God. Are we really back here again? At the “gender inequality” thesis? For those who dip in and out of the violence against women and children issue, “gender inequality” was the argument — dominant for a while — that various forms of structural and cultural inequality between men and women were the root cause, even the always present cause, of such violence. In the public arena, “gender inequality” came after the notion of “respect” and before the attachment to “coercive control”, the current but highly debated favourite.

Yet “gender inequality” appeared to be rejected about two or three years ago. Jess Hill noted its inadequacy in See What You Made Me Do; Gay Alcorn published a long report in the Guardian, speaking to several dissenting researchers who labelled it an ideology lacking evidence and excluding alternative views. Finally, when three hideous stranger murders, starting with that of Eurydice Dixon, occurred rapidly in Victoria, it became clear to many that there was something absurd about trotting out this pat opinion in the face of such evil and complex acts.

Labor backed away from “gender inequality” then. It’s a tough sell for Scotty, an evangelical. But if he can talk the talk sufficiently, he may achieve the results required, which would be to somewhat shave back the Labor-Liberal gender gap in key marginals. The “gender inequality” thesis is ideal for that, because no one expects it to have any results for decades. Even its proponents say that. As Alcorn noted, it has arisen specifically in Australia and become an ambitious plan to re-engineer a whole culture, and to thereby move “towards zero” the target we are promised for this… and youth suicide… and every other social problem worth a headline.

But if addressing “gender inequality” is going to do that, it had better get its skates on because over the last decade of the national plan it appears to have achieved almost no reduction in the prevention of such violence by any measure. At one end, police callouts are either static or rising. They may be rising due to greater responsiveness, but that battle seemed to be won a few years ago. The cops now go out to loud arguments (of the poor). And at the other end, murders of women over the past decade have remained static at about 70 a year (a longer term decline has been of murders in general).

This is, pure and simply, failure on a grand scale, and by programs that run under a specific ideology. The new life that “gender inequality” has found as a public cause appears to be because elite white women are increasingly becoming the visible figures in the violence against women cause. That’s no great surprise. Much of the activism around VAW has really been a war of position between the male and female section of the power elites, as the latter address the remnant inequalities around things like public space, sense of threat and risk, and situational social power. That runs up against some very deep forms of structural inequality, some of them part-anchored in embodiment.

The “gender inequality” push has a social constructionism at its root — not one of analysis, but of simple policy will. This will be insisted upon by the powerful policy apparatus behind it, and if they have to go to the Coalition to re-assert it, they will.

The “gender inequality” argument has, since its formulation in the 1980s, been specifically disproven by research on domestic violence in same-sex couples, which is of equivalent rates to different-sex couples, and must therefore run off some other drive (unless one does some smoke’n’mirrors stuff with “deflected patriarchy” or some such). But it is also a product of circular logic from the essentialist separation of violence against women from violence in general.

That separation arises from an enforced category error in which the asymmetry of victimhood by abstract social category — men are both principal perpetrators and victims of violence, women mostly victims — hardens into the idea that these categories are groups with inner equality. This is the implicit Underbelly approach to male-on-male violence, in which male perpetrators and victims are seen as having some sort of equality of situation as people of violence.

Sometimes they do. But mostly male victims of violence are exactly that: young men out of their depth, LGBTIQ men, disabled men, old men. They are hurt and killed by the powerful, the evil and the screwed-up, and for the same reasons men kill women: anger, control, jealousy, sadism, alcohol and drugs.

There is, one can admit, a particular and unique horror to partner murder. But that has been used to enforce the male/female victim distinction, and, as doyen of alcohol studies Michael Frame pointed to in Alcorn’s report, to obscure cross-cutting categories such as the role of alcohol and drugs in serious violence across every category of victim.

As Marcia Langton pointed out, the application of gender-wide approaches has piled up unintended consequences for Indigenous women. Quite aside from falsely separating what might be better seen as violence against Indigenous men and women, both the gender inequality and coercive control push are fusing together action on VAW and total policing. The only people who unequivocally benefit from that are high-status white women. Which is why — hey, presto! — the cause is now on the political right.

Your correspondent has been noting this for years. So have others such as m’former colleague Ms Razer, Gay Alcorn (then at the Guardian), and Julie Szego at The Age. The latter two’s courage in bucking the party line appears to have failed them of late. Most Our Watch journalists won’t interrogate these power structures, and Our Watch has largely become a propaganda outfit for the party line.

Which is a pity, because if someone had said 10 years ago that a decade down the track we would have spent, by some measure, close to a billion dollars on this and barely shifted the needle on lethal and non-lethal violence, you might have said that surely there would have been uproar before we got there. Yet here we are 10 years down the track. And here we will be in 10 years’ time, unless there is a real concerted challenge to what amounts to social policy power plays by Big DV, and a willful compliance with it by whoever the latest victim/advocates are.