Here’s The ‘Destiny 2’ Season Of The Lost Roadmap, Kind Of 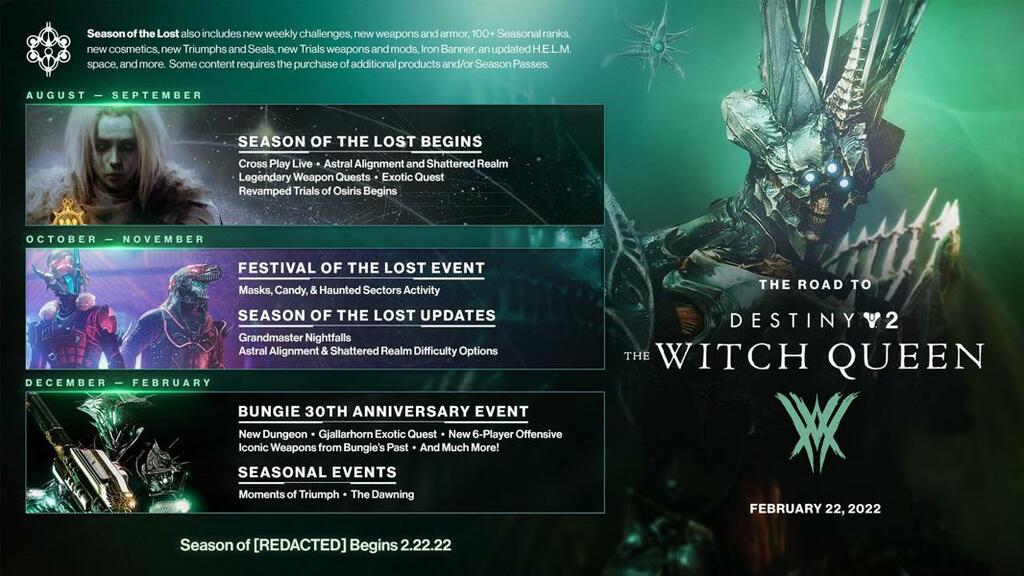 Destiny 2’s Season of the Lost launched without any kind of roadmap at all, which is unusual, given that we’ve had one for every season for something like two years now, at least. Given that this is a six month season before The Witch Queen, I figured that Bungie may just be taking a while to organize such a long span of time, and now we do have our first roadmap for Season of the Lost.

I am hesitant to call this a roadmap, and even Bungie isn’t calling it that. Above is what they’re referring to as a “calendar,” without any specific weekly reset dates, just things happening in given months. There is some new information on there, but not much, and a lot of it is what we already know about the current season and the upcoming Anniversary event. See it in larger form here.

Here are the highlights:

August-September: Pretty much just everything we’ve done so far. Astral Alignment and Shattered Realm. We just got the Ager’s exotic quest as of yesterday. I’m not quite sure what “legendary weapon quests” are, but I sort of assume that’s just seasonal weapon farming? Technically, we should only have two more weekly resets until the “main” initial questline of Lost is over, the part with the Techeuns, but who knows what happens after that, and the rest of the calendar doesn’t really offer clues in that regard.

October-November: So, here we have official confirmation that Festival of the Lost’s Haunted Forest is dead, which I figured would be the case when they vaulted Mercury, and instead we are getting something called “Haunted Lost Sectors” which should be new. This is also when we get our dinosaur armor. Astral and Shattered will get difficulty options, but it’s not clear what the rewards are supposed to be for those. Perhaps high stat armor or double perk weapons or something, similar to last season.

December-February: And finally, this sprawling stretch of time will be the “second half” of the season, kicking off with the 30th Anniversary event which has both paid and free components. A new six-man activity is free, while the new loot cave dungeon and Gjallarhorn return are paid. This is also the first I’ve heard about Moments of Triumph returning, as usually we get those much earlier than here. The Dawning has also not be replaced by the Anniversary event.

Again, we don’t have any specific dates tied to anything going forward really, so it’s going to be a mystery what’s going to happen at any given reset, and my guess is that Bungie has some surprises up their sleeve, rather than just…yawning voids of dead time before Witch Queen. Granted, there will be some down time during this six month span, and yet I know they want to maintain their recent momentum.

I kind of like having a lot of stuff be unknown here, as sometimes roadmaps can give too much away. In this case, it seems like the next 2-3 weeks will be the culmination of the current Mara Ley Line storyline, but I cannot imagine that’s all that’s happening with the Lost story this season, and it may move to a new phase. And of course, the anniversary event seems like it will be great.

So, this may be our “roadmap” for the season, and I’m not expecting a more detailed one anytime soon. We’ll just tune in every Tuesday and see what happens, I suppose.