‘Her calculation is off’: Sinema dares the left to take her out 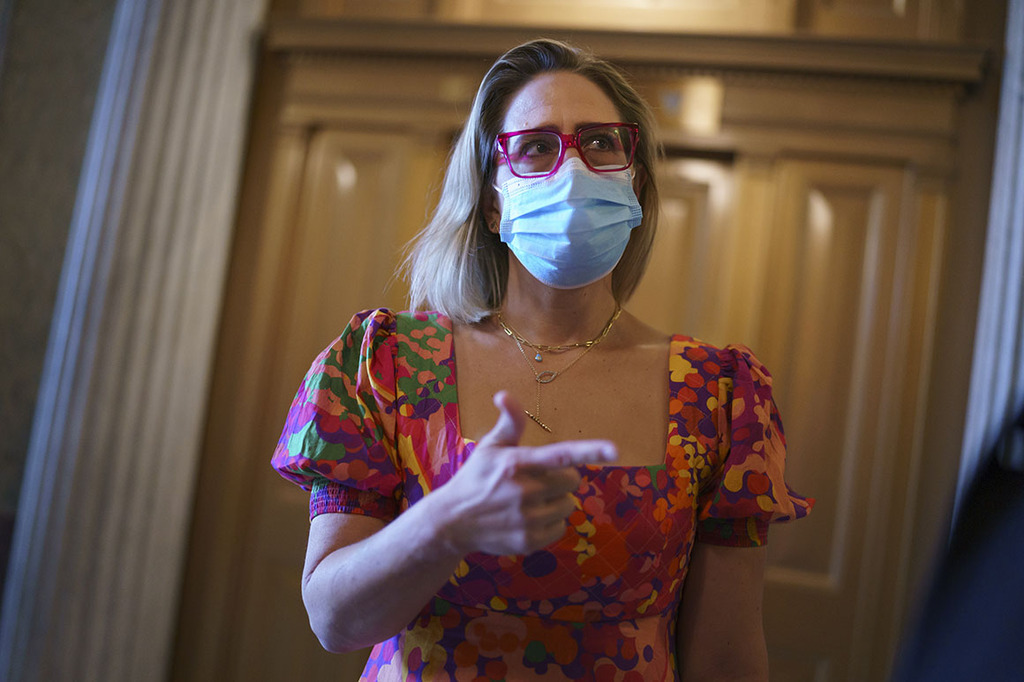 When Kyrsten Sinema became the first Arizona Democrat in more than 40 years to win an open Senate seat, she was heralded by her party for breaking the Republican stranglehold on a state where Barry Goldwater’s brand of conservatism runs deep.

Three years later, the novelty has worn off. Nearly one-third of Arizona Democrats view Sinema unfavorably, according to one recent poll. The state party put her on notice of a potential vote of no confidence. She was greeted by protesters over the weekend when she returned home for a fundraiser, and then confronted Sunday by activists who filmed her in a restroom.

Her experience is a testament to the heightened expectations of Arizona Democrats. But it’s also indicative of a deeply polarized national environment that is increasingly intolerant of Sinema’s brand of centrist politics — whatever its local logic.

“She’s trying to be a moderate, because Arizona is a moderate state and the way you get elected here — or at least the way you have in the past — is to not be challenged in a primary and get your ass to the middle to try to keep enough swing voters in your camp,” said David Doak, a retired longtime Democratic strategist and ad maker living in Arizona. “Given the polarization — the leftists are more left now and the right-ists are more crazy now — your calculation needs to be different … Her calculation, I think, is off.”

It’s a plight that would be painfully familiar to a vanishing species in Washington: the centrist lawmaker who must hop left and right for their mere survival — risking the fury of hardcore partisans in the process. While Sen. Susan Collins (R-Maine) won reelection in 2020, within a few months of her victory she was officially condemned by her state party for her impeachment vote. In Alaska, Republican Party leaders this summer overwhelmingly endorsed Sen. Lisa Murkowski’s primary challenger, Kelly Tshibaka, ahead of Murkowski’s reelection bid next year.

Democrats’ frustrations with Sinema and her fellow Senate holdout, Sen. Joe Manchin (D-W.Va.), come as President Joe Biden and Democratic lawmakers in Washington labor to reach a deal on a climate and social spending plan.

And though many Democrats give Manchin a pass due to the heavily Republican composition of West Virginia — where Donald Trump beat Biden by nearly 40 percentage points last year — even he hasn’t escaped rebuke from his putative allies, with Democratic activists in kayaks protesting outside his houseboat last week.

In Sinema’s case, the center to which she is clinging may have shifted. When Sinema defeated Republican Martha McSally in one of the most closely watched Senate races of 2018, the end game for Democrats in Arizona was to elect any politician with a “D” behind their name.

The landscape looks different now, on the heels of Biden’s 2020 victory and demographic trends that are driving Democratic gains in Arizona.

“The activists, the people who are going to knock on doors, those guys are done with her,” said Steven Slugocki, former Democratic Party chair in Maricopa County, the state’s population hub.

“Arizona is a rapidly changing state,” he said. “It is turning blue very quickly. I don’t know what her end game is.”

Calling Sinema an “obstructionist” rather than a centrist, Garrick McFadden, a former vice chair of the Arizona Democratic Party, said it’s “not just the hippies and the 20-, 30-year-old” Democrats who are fed up with her, but more moderate and institutional-minded Democrats, as well.

“I don’t understand the calculus,” he said. “It’s not like we’re asking her to do the Bernie Sanders or the Elizabeth Warren agenda. It’s the Joe Biden agenda.”

That nationalization of the stakes surrounding Sinema is a significant complicating factor for her. Progressives are already laying groundwork for a potential primary challenge to her in 2024, forming a Primary Sinema PAC. And if a credible primary challenger materializes, they are likely to be well-stocked with contributions from out-of-state donors and activists who are already familiar with Sinema’s voting record — especially her opposition to eliminating the filibuster.

“All statewide elections are national elections now, as opposed to local elections,” said pollster Fernand Amandi of Bendixen and Amandi, whose firm polled in Arizona earlier this year. “Any candidate like Sinema is always going to be running two elections simultaneously, which is the prospect of a primary challenge, and the prospect of winning reelection … There’s a bit of a prisoner’s dilemma about the whole thing.”

Still, the open revolt befalling Sinema from within her own party’s ranks obscures the fact that Arizona remains a state where Democrats are outnumbered by both Republicans and independents. The GOP also controls the levers of power — the governorship and both chambers of the legislature.

“Let’s face it, Arizona for all the talk, and certainly 2020 excepted, is still a Republican state,” said Barrett Marson, a Republican political strategist in Arizona. “That’s why you see Senator Sinema hew to the center and oppose some of these more progressive policy ideas … She’s angering the base, of course, and it is too early to tell whether she will make up for the loss in support from the Democratic base by appealing to independents and moderate Republicans, or even conservative Republicans … But, that’s clearly the bet she’s making.”

Polling in Arizona suggests that Sinema is making up for her loss of support among Democrats with Republicans and independents. A poll by Phoenix-based OH Predictive Insights last month found that while Sinema is viewed negatively by nearly a third of Democrats in the state, her approval rating was 46 percent, about the same as her fellow Democratic senator, Mark Kelly. A Bendixen & Amandi International poll earlier this summer found similar results.

“Arizona does have a history of having maverick senators who have challenged their own party from time to time, and Arizona voters have a history of rewarding that,” said Kirk Adams, a former Republican state House speaker and former chief of staff to Gov. Doug Ducey.

“There will be activists in the party and outside groups that will be very upset and will oppose her and will swear that they’re going to take her down in the next election,” he said. “But Kyrsten is always very strategic. I think she understands the state very well, and I think she’s going to be rewarded by those moderate Republican and independent voters.”