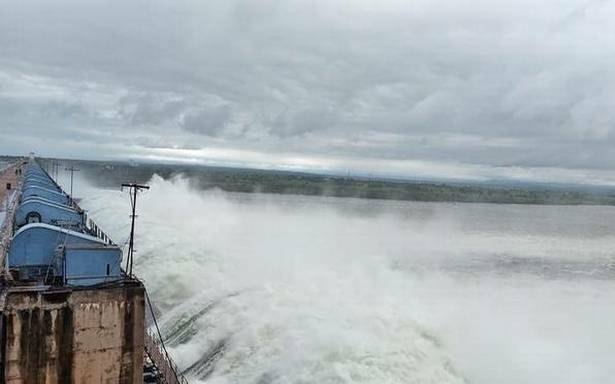 All the major and medium irrigation projects and minor irrigation tanks, particularly in the Godavari Basin, are discharging surplus water downstream with incessant rains lashing the immediate catchment areas within the State and in the upstream areas of Karnataka and Maharashtra.

The ongoing spell of heavy rains made Singur and Nizamsagar projects, the only project yet to reach surplus position till the other day, surplus as the authorities took up spillway discharge of flood from Monday night at Singur and from Tuesday evening at Nizamsagar, as a precautionary measure to keep a safe flood cushion in the reservoirs.

According to irrigation authorities, the discharge of flood from the spillway of Singur was commenced around 9 pm on Monday with a discharge of about 4,500 cusecs and it was likely to increase to 35,500 cusecs as the inflow went up to 40,200 cusecs. The storage was 29.16 tmc ft against its capacity of 29.91 tmc ft.

Similarly, the spillway discharge at Nizamsagar was taken up on Tuesday evening by letting out 7,300 cusecs against the inflow of 22,650 cusecs. Storage of the reservoir was 15.83 tmc ft against its capacity of 17.8 tmc ft as of Tuesday evening.

Meanwhile, Sriramsagar was receiving huge flood, highest in recent years, as of Tuesday evening as the inflow was 3.5 lakh cusecs and the discharge of flood from the spillway too was similar at 3.5 lakh cusecs from 33 crest gates. Another 7,000 cusecs of flood was also being let into river after power generation.

The engineers of Sriramsagar alerted officials and people living in the habitations along the river course downstream that the discharge could cross 4 lakh cuses or even more as more flood was forecast from the upstream. Similarly, Mid Manair was getting inflow of 59,300 cusecs, Lower Manair 2.62 lakh cusecs and Kaddam 22,300 cusecs. Outflow was 1.05 lakh cusecs, 2.62 lakh cusecs and 18,150 cusecs, respectively.

In the Krishna Basin, Jurala was getting 93,000 cusecs flood and discharging over 1.03 lakh cusecs including 72,900 cusecs from 11 spillway gates and another 30,450 cusecs with power generation. As a result, the storage of Srisailam reservoir was improving and reached 168 tmc ft against its capacity of 215.8 tmc ft after it went down below 155 tmc ft with regular drawals for canals, lifts and power generation by Andhra Pradesh and Telangana.

Of the 36 medium irrigation projects in the State, the cumulative inflow and outflow was 2.1 lakh cusecs as a healthy cumulative flood cushion was being maintained. Against their capacity of 62.12 tmc ft together, the projects were holding 56 tmc ft as of Tuesday.