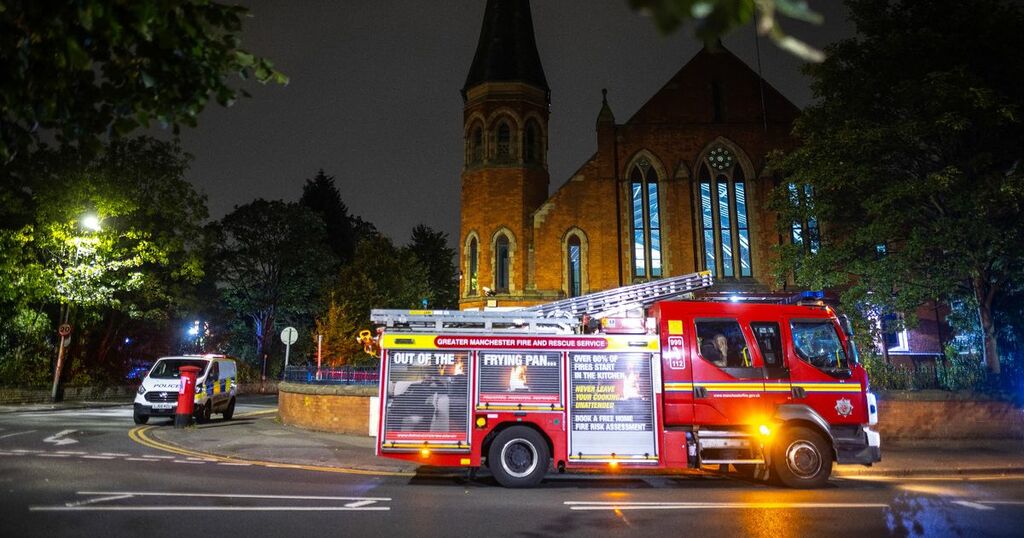 Hate has 'no place in our society' Didsbury Mosque says after a fire broke out overnight in an arson attack.

Police and fire crews were called to the scene on Burton Road, Didsbury, at around 11.55pm on Friday (September 10).

Two neighbours walking past reportedly intervened and put the flames out with their coats.

Police have said they are treating the incident as a hate crime.

They have also confirmed that no one was injured.

Two fire engines attended and were on the scene for approximately two-and-a-half hours.

Admin officer for the mosque, Tracey Pook, said she is 'extremely thankful' for those who assisted with putting out the flames.

"There are no words for that, we can never thank them enough," she said.

"If it was a bit later, maybe nobody would have seen it - I hate to think of the damage it might have caused.

"Hate has no place in our society.

"If we were all the same, the world would be extremely boring.

"We are a beautiful mix of difference and we should embrace that difference of each other.

"That's Islam - be good and show the goodness."

Inspector Shoheb Chowdhury, from GMP's south Manchester district, said: "This is a dreadful incident which will no doubt have caused concern in the community and we are doing all we can to find who was responsible and continue to engage the mosque and those concerned in the community.

"Detectives have been carrying out enquiries and have already seized CCTV and items from the scene as part of the investigation.

"Our officers will be in and around the area today and anyone concerned can speak to officers who will address any concerns.

"Hate crime will not be tolerated. We're fortunate in that Greater Manchester is a diverse place that our communities call home and those who wish to commit a crime motivated by hate will be brought to justice.

"We believe there were several vehicles that may have driven past at the time and would ask anyone who may have any dashcam footage to get in touch.

"Anyone with any information that may assist with our investigation can report it online or by using our LiveChat service at www.gmp.police.uk or by calling 0161 856 4973.

Former Liberal Democrat Cllr for Didsbury West, Richard Kilpatrick said: "Very late last night, two neighbours of the mosque were walking past to see a person start a fire with something that looked like a cannister.

"In the commotion, they scared them off and actually used their coats to put the fire out, then reported the matter to the police.

"It makes you think what could have happened if they had been successful.

He added: "To go and see what has been an uneducated, misinformed, angry act like this, it just makes me angry.

"The Mosque won't react in this angry way, it will do exactly what it would do in the face of adversity and probably open it's doors, invite people in and continue to play a really integral leading role in the community.

Deputy Leader of Manchester City Council Cllr Luthfur Rahman OBE said: "This is a despicable act designed to create fear and hatred. It is only by luck that no serious damage was caused.

"Manchester has consistently shown that we are a city which stands together and will not allow extremists to divide us.

"I commend the neighbours who raised the alarm - they, not the cowards responsible for this arson, are the true spirit of this city.

"I'd urge anyone who has information which can help the police catch the perpetrators to come forwards."

"A joint forensic investigation between GMFRS and Greater Manchester Police was undertaken at the scene and concluded at 02:30am this morning.

"Fire crews were on the scene for approximately two hours 30 minutes."

There will be a Stand Up to Racism vigil which will be held outside Didsbury Mosque at 5pm today.