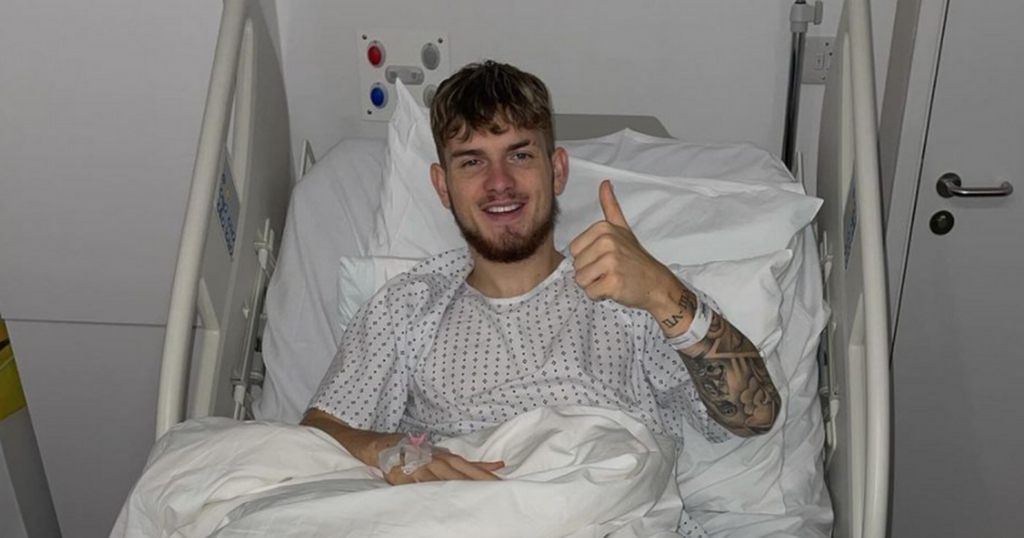 Liverpool starlet Harvey Elliott delivered a withering put-down to a Manchester United fan who taunted his injury on social media.

Elliott, 18, has undergone successful surgery after he suffered a dislocated ankle in Sunday's Premier League clash at Leeds United.

The prodigious talent appears unlikely to play again in 2021 and will spend the upcoming months rehabilitating from the serious injury.

Elliott has received countless messages of support from his teammates and fans as he begins his journey back to full fitness.

One comment on TikTok was anything but supportive, however, as a United fan made an unpleasant joke about his lack of mobility.

Responding to an encouraging video made by a Liverpool fan which showed Elliott walking out at Elland Road, the Red Devils supporter wrote: "He's not walking like that anymore."

The barb did not escape Elliott's attention and he replied: "Crazy though how I have more legs than United have trophies in the past eight years, X."

The light-hearted dig at United's lack of silverware since Sir Alex Ferguson left the club quickly defused the situation and the Red Devils fan responded: "Haha, fair enough. You're a baller."

Meanwhile, Elliott posted an update from his hospital bed of him smiling and with his ankle in a cast as he provided an update on how his surgery went.

"Operation was a success! Thank you so much to everyone for your amazing support," he wrote on Instagram on Tuesday. "The road to recovery starts now. At the end of the storm there’s a golden sky."

Liverpool confirmed on their official website Elliott will begin a rehabilitation programme.

Is Harvey Elliott a Liverpool legend in the making? Comment below.

The former Fulham wonderkid is expected to return to action later this season but Anfield doctors are not placing a timescale on his recovery.

Club doctor Jim Moxon - who treated Elliott in the moments after his injury - said: "Harvey sustained a fracture dislocation of his left ankle during the game.

"We were able to reduce the dislocation immediately on the pitch and Harvey had surgery today to repair the fracture and ligaments damaged in the incident. The operation was a success so his comeback starts now.

"We won’t put pressure on him by setting a specific timeframe beyond being able to say with confidence we expect him to feature again later in the season following our rehab programme."

Expressing his gratitude to Leeds' doctors on LinkedIn, Morgan wrote: "Thankfully those injuries are rare but the shared training we do as part of the FA led ATMMIF (Advanced Trauma Medical Management in Football) courses really comes into its own in those moments and to have Paramedics on hand is always hugely reassuring."