By George Flood and Jack Rosser 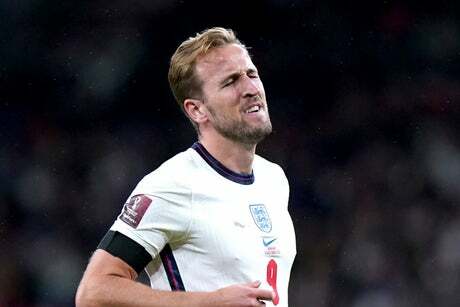 Harry Kane has dismissed concerns over a potential hangover from his failed summer push to leave Tottenham after his club struggles surfaced with England.

The Three Lions captain gave his latest subdued display in Tuesday’s 1-1 World Cup qualifying draw against Hungary, with Gareth Southgate’s side delivering a drab performance despite an attacking lineup with Kane flanked by Jack Grealish and Raheem Sterling, and both Mason Mount and Phil Foden part of the midfield triumvirate.

Kane had previously scored in 15 consecutive World Cup and European Championship qualifiers for his country - a remarkable run that stretched back to September 2017.

However, he was replaced by Tammy Abraham as below-par England searched in vain for a late winner in north-west London, with much of the post-match discourse then inevitably focused upon his struggles.

Kane has endured a difficult period of club form since failing to seal a big-money move to Manchester City during the summer’s most high-profile transfer saga, not scoring or assisting any goals in six Premier League appearances so far this term.

For Spurs, the 28-year-old has only found the back of the net in the Carabao Cup and Europa Conference League so far, though he insists there is no need to panic after admitting that his performances over recent weeks have been lacking.

“It’s natural that people think like that and obviously everyone is entitled to their opinion but at the end of the day, I’m my own biggest critic,” Kane told ITV when asked about a potential hangover from his transfer saga.

“I put the most pressure on myself to deliver and perform and play well, so at the end of the day I’ve just got to keep working hard for the team.

“It was the first game in 15 that I haven’t scored, so not the end of the world. Everyone who knows me well knows I’m confident every time I play. I’ll be ready for the next one.”

Pressed if his mind was clear after the summer, Kane added: “I’m as clear as anything. Obviously [there is] a lot of noise around me and when you’re a high-level sportsman, sometimes that’s the case. It’s how you deal with that.

“I’ve got good people around me, good friends and family, good team-mates, good coaches. Every time I step on the field I give it 110 per cent for club and country.

“Performances for club and country maybe just haven’t been there the last few weeks, but there’s no need to panic. I’m confident in myself, I’m confident in the teams I play in. That’s the way it goes.

“I’m in a good place. Obviously I know there’s been a lot of talk about me, at the end of the day I’ve still scored nine goals this season.

“I’m there, I’m working as hard as I can for the team. When the chances come, I’m confident I will put them away.”

Southgate stood by his captain, despite England’s blunt attacking play.

“We didn’t play as well as a team as we should and we can,” said the England coach.

“We need to refresh that and get fresh legs into the game. With any of the forward players, there’s always a story when we take them off. They’re big players. We have to have a team able to do that. We felt it was the right thing. I don’t think singling out any players is fair because we’re all responsible for that.”

Southgate had looked to be more open and attacking, with only one holding midfielder present in Declan Rice, but England struggled to click.

However, defender Tyrone Mings insisted the fault laid with the players and not the manager’s decisions.

“I don’t think we as individuals performed well enough,” said Mings. “Tactics are a very small part of winning or losing.

“We have to perform to standards we’ve performed to before. Individual performances weren’t there tonight. We’re disappointed.

“We always measure our performances and standards based on what we’ve set previously.

“Tonight we fell short of that. We didn’t do enough to win the game, we didn’t ask Hungary enough questions and were not as free flowing as in the past.”