BJP Rajya Sabha member G.V.L. Narasimha Rao has urged the heads of Central government institutions to expedite the establishment of their regional offices in Amaravati, the capital of Andhra Pradesh.

Mr. Narasimha Rao has written to the chairmen and heads of the Central government organisations and institutions that had been allotted land in Amaravati four years ago, to immediately undertake construction work as per the terms of land allotment and commence their activities.

Informing that the terms of land allotment required them to initiate construction activity within six months and complete the same in four years, Mr. Rao said, “I am informed that your organisation has not even commenced any construction on the allotted land so far. As a long period of over four years has lapsed since the allotment of land to your organisation, I am writing to ascertain the reasons for the delay for starting the works and drawing your personal attention and intervention in the matter.”

He said establishment of prestigious institutions and organisations was an essential part of the development plan and institutional architecture of Amaravati.

Quoting from the landmark judgment of the Andhra Pradesh High Court in March this year, ruling that Amaravati alone would be the capital of Andhra Pradesh, Mr. Rao pointed to the court directive to the State government and the APCRDA to complete the process of development and infrastructure in the capital city and the region by providing basic amenities such as roads, drinking water, drainage and electricity within one month from the date of the order.

The BJP leader decided to pursue the matter actively with the Central institutions after representatives of Amaravati farmers met him on April 7 during their visit to Delhi. 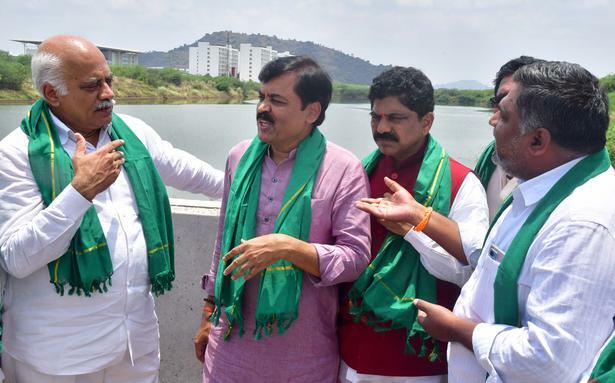 Discord with JSP only a creation of the media, he says