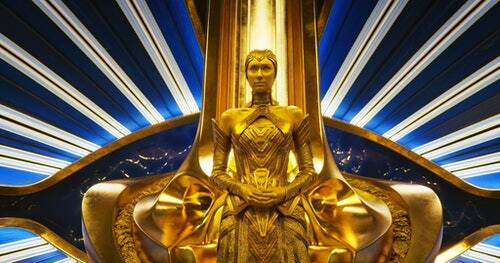 Guardians of the Galaxy is getting the video game treatment at least partially inspired by the Marvel Cinematic Universe version of the team. And if one seemingly random character’s inclusion is any indication, then the game might follow through on an unfulfilled promise that the movies broke.

In the upcoming game, character designs are all recognizable outside of a few small differences and Star-Lord still loves his ‘80s music. But it’s tapping into some weird ideas and characters that the MCU has not introduced yet, like Lady Hellbender and Grand Unifier Riker.

In particular, Riker’s inclusion hints that a major player in the Marvel universe — one that the MCU has not explored — could play a major role in the Guardians of the Galaxy game.

We’re talking about Adam Warlock and his evil variant Magus.

In August 2021, developer Eidos Montreal released a trailer introducing the villain Grand Unifier Raker and his organization called the Universal Church of Truth. In the video (included below), Raker confronts the Guardians with his massive ship, saying that a “matriarch” wishes to share “the truth” with them. While the trailer itself isn’t super notable, its implications on the game’s narrative are massive.

The developer commentary confirms that Grand Unifier Raker is based on Cardinal Raker from the comics. In the comics, Raker and the Universal Church of Truth are a religious cult that worships Magus, the evil form of Adam Warlock, a “perfect” being created by scientists on Earth.

Magus is a future version of Warlock created to fight Thanos, but he ends up in the past, forms the Universal Church of Truth, and eventually confronts Warlock. He’s ultimately defeated when Adam Warlock steals his own soul from the future and prevents himself from ever becoming Magus.

According to the premise shared by the developers, the Guardians may be responsible for awakening Adam Warlock and Magus. Senior Creative Director Jean-Francois Dugas told Game Informer that the Guardians find a “mysterious entity” while on a mission for Lady Hellbender toward the start of the game.

“As they go through that journey, they release a mysterious entity that at this point in time looks inconsequential,” he said. “As they continue their life trying to make a bit of money, this thing grows in the shadows and eventually threatens the galaxy.”

A mysterious entity that initially seems inconsequential but becomes quite significant sounds like a clear setup for Adam Warlock and Magus. The Guardians might free Adam and/or Magus toward the start of the game, thinking he’s a normal guy. But then they gain more power, become evil, and threaten all of existence.

While this “mysterious entity” could turn out to be plenty of other fantastical galactic beings from the Marvel Universe, Adam Warlock seems to fit the best with the pieces that Eidos Montreal has set up. Plus, Adam Warlock and Magus are characters that the MCU films haven’t fully developed yet.

Adam Warlock was memorably teased in a post-credits scene of Guardians of the Galaxy vol. 2 after as Sovereign leader Ayesha created him to take down to Guardians. While some speculated that he could appear in Avengers: Infinity War or Endgame, the MCU has yet to follow up on this story beat. At the earliest, we’d see it in Guardians of the Galaxy vol. 3 in 2023, but he may have been abandoned entirely.

We won’t have to wait long to find out if we’re right or not because Guardians of the Galaxy will be released on October 26, 2021.