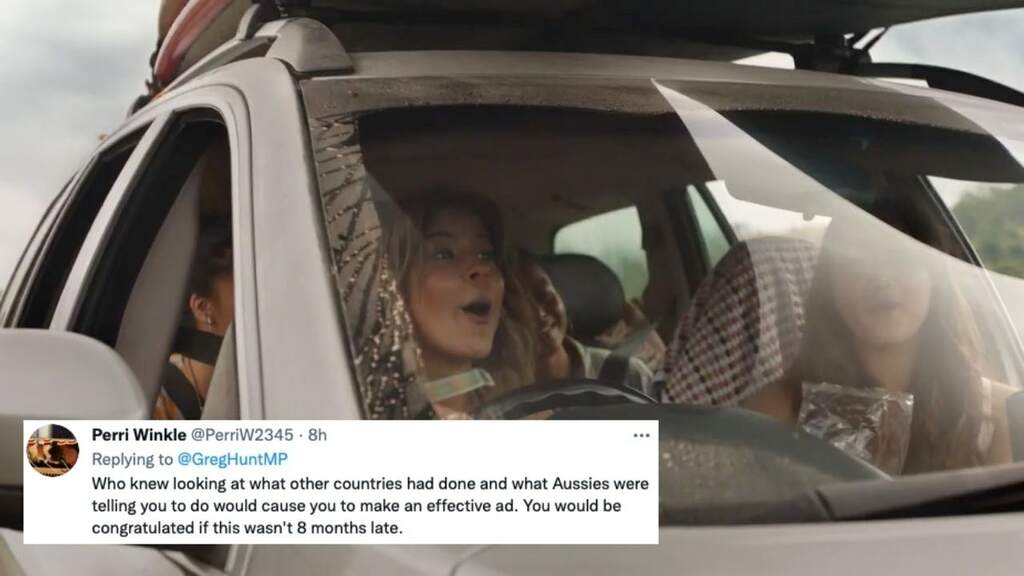 Health Minister Greg Hunt is being absolutely dunked on following his announcement of a new vaccination campaign ‘First things first’ – because that’s precisely the attitude people wished he displayed last year during his negotiations with Pfizer.

The ad features people dancing at weddings, crowd surfing at concerts, road tripping with the gals, etc. and basically paints an exciting future for once we’re all vaxxed. It’s not unlike New Zealand’s vaccination ad from earlier this year (probably not a coincidence), and it’s significantly better than the ad our government previously aimed towards young people where a woman basically hyperventilated on screen. Awful.

So, you may be wondering , if the ad seems wholesome and unproblematic, why is Greg Hunt getting slammed in Twitter comments?

Well, for that, you need to be caught up on the absolute shitshow that is our government’s vaccine rollout – all the way back to last year, June 30, when Pfizer reached out to Hunt’s office and tried to organise a meeting to discuss manufacturing vaccines.

Emails unearthed by Labor under the Freedom of Information Act show that Pfizer tried to organise a meeting for over a month before actually getting one in August, and it wasn’t until November that our government signed off on an order for Pfizer. To put that into perspective, the US and UK had already signed off on orders in July.

So while much of Greg Hunt’s own state of Victoria was entering lockdown in July 2020, and despite Pfizer wanting to move at “unprecendented speed” to deploy vaccines, no one from his office even met with Pfizer until nearly 4 WEEKS later?

That whole fiasco has led to people feeling like the government was slow in its acquisition of vaccines, with accusations that if we’d rolled out vaccines sooner, we wouldn’t be in the situation we are in now – with NSW’s daily case numbers exceeding those of 2020, and Victoria in it’s sixth lockdown.

So, it comes as no surprise then, that a vaccine ad called ‘First things first’ is rubbing people up the wrong way. You know what should have been done ‘first things first’? A strong vaccine rollout.

‘First things first’ might have been really handy in 2020 when you procured sufficient vaccine to avoid the full-blown crisis we now face.

First things first? Now? Perhaps if you’d have done the first thing first and get vaccines things might have been different. What a joke.

Can you feel Australians’ rage at your failure and delays? We need not be in lockdown if you’d organised vaccination. We were at Covid Zero because the people did their bit!

I can't get a first dose Pfizer appointment until November in my area.
By all reports, we will have run out of Pfizer by then.
Plus we've got to payback the countries we begged to borrow from.

Too little, too late, too many deaths.
Resign.

Who knew looking at what other countries had done and what Aussies were telling you to do would cause you to make an effective ad. You would be congratulated if this wasn’t 8 months late.

Personally, I like the ad. It’s a positive reminder of the potential we have once we are all vaccinated, which is especially nice for me considering three months of lockdown, complete with curfew and no outdoor recreation has left me feeling pretty hopeless.

But, it’s also an ad that we should have launched months ago, if not almost a year ago, when vaccines should have been rolled out.

You can watch the full ad below.