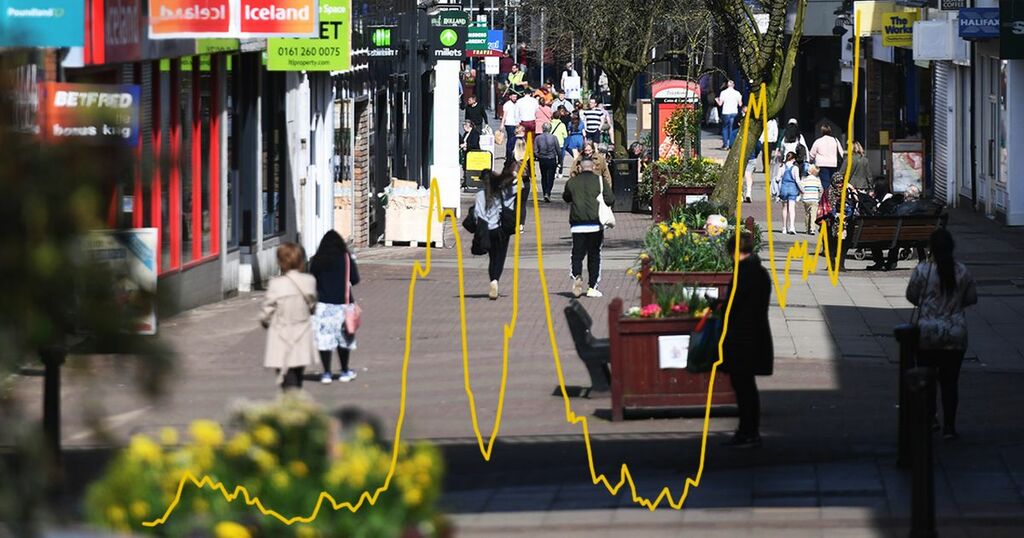 Coronavirus cases in Trafford are continuing to soar - with the infection rate increasing by 50 per cent week, the latest figures show.

The latest Public Health England data shows that the transmission rate in the borough now stands at 731.1 per 100,000 .

That is the highest rate the borough has ever seen - and the highest currently in Greater Manchester.

It is the joint second-highest rate in the country - with Barrow-in-Furness - as things stand.

READ MORE: 'Very grave' situation in Trafford as infection rate at highest ever

Trafford saw the highest increase anywhere in the country in a week - topping 315 local authority areas.

The latest data showed the rate increased by 50pc in the borough over seven days.

It comes after health officials said situation in the borough was 'very grave', with 29 outbreaks at schools.

That is 'having a big impact on attendance and staff absence'.

Bosses say the rate being driven by a rise in infections among school kids.

New measures - which go further than national advice - have been introduced to try and curb the soaring rates.

These include secondary school pupils and staff, as well as primary school staff, being advised to wear face coverings when moving around buildings.

Parents dropping off and picking up are also being asked to wear masks.

Last week, bosses in Trafford introduced a policy asking parents to isolate their children for three to five days - before taking them for a PCR test - if someone in their household tested positive.

This differs to national guidance. Since August, double vaccinated adults and all children have not had to self-isolate if they are a close contact of someone who has Covid.

Helen Gollins, acting director of public health at Trafford council, said: "Sadly our Covid-19 rate in Trafford is very high and it continues to rise.

"With these measures we hope to reduce the number of cases in schools so children can continue to attend lessons."

In the week ending on October 5, there were 1,737 positive Covid tests in Trafford.

This is 576 more than in the previous week.

Across Greater Manchester as a whole, rates have risen in seven other boroughs, aside from Trafford, but have fallen in two.

A total of 10,353 people tested positive for coronavirus across the region in the week ending October 5.

The weekly total has increased by 980 cases compared to the previous week, which means the infection rate was up 10 per cent in the last week.

Coun Mike Freeman, chairing a recent health meeting in Trafford, said: "It’s not lost on me that the infection rate in Trafford since we last met has rocketed and is now as high as it’s ever been during this pandemic.

"This is extremely disappointing, but I think the situation is made difficult by the fact that nobody really wants to talk about Covid-19 any longer.

"There remains a sense out there that this pandemic is over and I cannot help feeling that central government have somewhat abandoned our children, their parents, schools and staff within schools to the ravages of Covid-19.

"The situation in my view remains very grave. I’m aware of the pressure this is putting on our public health staff as they continue to work in what can only be described as very, very difficult circumstances."

In the week ending on October 03, a total of 204 patients were admitted to Greater Manchester NHS hospitals with Covid-19. That is two more than the week before, a rise of 1 per cent.

On Tuesday October 05, there were 34 Mechanical Ventilation (MV) beds occupied by Covid patients in Greater Manchester NHS hospitals. That is two fewer than a week earlier.

This is the most recent available data for hospital admissions, the figures for NHS trusts are not updated daily.

In the week ending October 5, a total of 39 people died within 28 days of a positive Covid test across Greater Manchester, which is eight more than the week before.

Cases reported in each of the ten boroughs

Manchester , which has the lowest infection rate in the region, recorded 1325 positive Covid-19 tests in the week ending October 5, which is 108 more than the previous week.

The infection rate is now 238.4 and is up by nine per cent week-on-week.

Oldham recorded 790 coronavirus cases, which is 61 more than in the previous seven days.

The latest infection rate is 332.5 and that is up eight per cent week-on-week.

In Rochdale , the number of cases is up by 24 per cent compared to the previous week - leaving the infection rate at 272.3.

There were 609 positive Covid-19 tests, which was 117 more than the previous week.

There were 1564 positive tests over the last week in Stockport , which is 16 more than in the previous week.

The week-on-week trend is up by one per cent and the latest infection rate is 531.6.

There was a rise of 21 per cent in cases in Bury over the week ending October 5, and the infection rate is now 314.1.

The borough recorded 599 positive Covid-19 tests over the seven-day period, and that is 103 more than the previous week.

Salford saw a total of 850 cases which is 28 more than the previous week and a rise of three per cent.

The most recent coronavirus infection rate is now 323.6.

The trend is down in Wigan , where there were 1085 positive Covid-19 tests, which is 32 fewer than the previous week and is down by three per cent.

The latest infection rate is 328.1, which is lower than the national average.

The infection rate is up slightly compared with the previous day and the week-on-week trend is up by 50 per cent.

In Tameside , the latest infection rate is 454.8 and the number of cases has gone down by five per cent.

A total of 1033 people tested positive for Covid over the seven days ending on October 5, which is 58 fewer than the week before.

Bolton is an area where the trend is up and the latest infection rate here is 264.

There were 761 cases recorded, which is 61 more than the previous week - a rise of nine per cent.