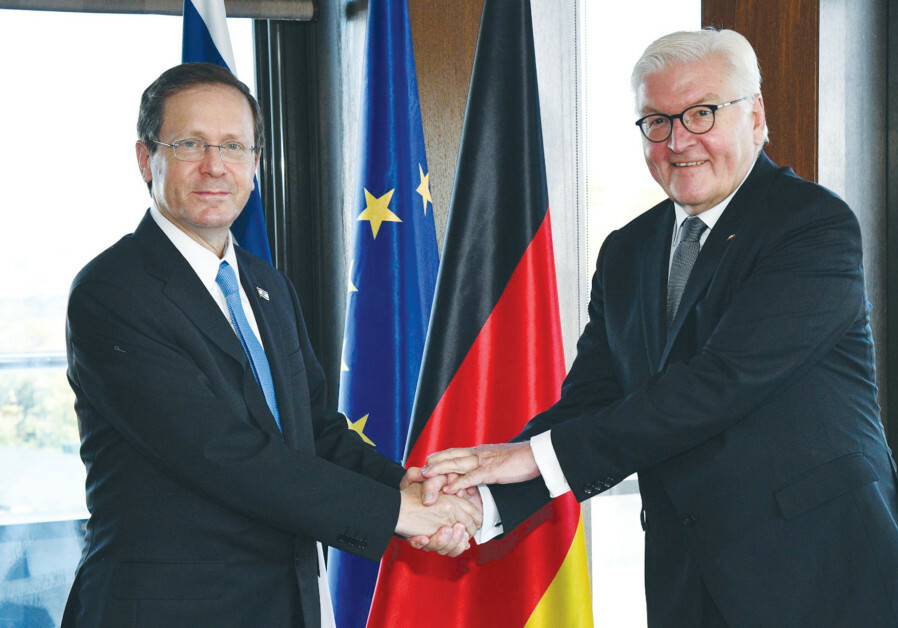 It’s not as if she’s never been to Yad Vashem before. Outgoing German Chancellor Angela Merkel probably holds the world record for leaders of foreign countries who have visited Yad Vashem, though it’s possible that German President Frank-Walter Steinmeier in his various capacities may have been there more often.

This will be Merkel’s sixth visit, and her last as chancellor. Both Merkel and Steinmeier have been outspoken on many occasions in their condemnation of rising antisemitism in Germany and their insistence that Germany must bear responsibility for Nazi crimes against humanity in general and the Jewish people in particular. Steinmeier said so again when he met in Ukraine with President Isaac Herzog and at Holocaust remembrance sites that he visited.

“The mass murder of Kyiv’s Jews was a meticulously planned crime – planned and carried out by members of the SS, the security police and the Wehrmacht. All of them were involved,” he said. “How I wish that I could state this as an unconditional truth. How I wish that I could say: We Germans have learned the lessons of history once and for all, but I cannot. It pains and angers me that antisemitism is, in Germany too – in Germany in particular – gaining strength once again.”

Merkel is expected to voice similar sentiments when she arrives in Israel on Sunday, as did outgoing German ambassador Susanne Wasum-Reiner, at this year’s German Unity Day celebration. On her last official visit to Yad Vashem, Merkel will be accompanied by Prime Minister Naftali Bennett, Yad Vashem Chairman Dani Dayan and Chairman of the Yad Vashem Council Rabbi Yisrael Meir Lau.

During the visit, she will be guided through the Flashes of Memory: Photography during the Holocaust exhibition as well as the Museum of Holocaust Art. Afterwards, Merkel will view a number of items from the Holocaust period that will eventually be housed in the new Collections Center, which is one of the elements of the Moshal Shoah Legacy Campus currently under construction at Yad Vashem. The Collections Center is being funded in part by the Federal Republic of Germany. Afterwards, Merkel will meet with Kindertransport survivor Henry Foner, renowned author of Postcards to a Little Boy. This authentic, moving book presents the illustrated postcards and letters sent by Foner’s father as well as other relatives and friends to the young refugee in the UK. Included in the book are the translations of the missives, and an historical afterword on the Kindertransport rescue effort in which 10,000 Jewish children – many of who never saw their parents or other close relatives again – were transported to England.

Merkel will also participate in a memorial ceremony in the Hall of Remembrance, where she will rekindle the eternal flame and lay a wreath in the memory of the six million Jewish victims of Nazi Germany and its collaborators. Then – at her personal request – she will enter the Holocaust History Museum for private contemplation and identification with the memory of the victims of the Shoah and their suffering.

■ THE BABI Yar massacre was a major act of genocide in the plan to exterminate the whole of the Jewish people, who – despite centuries of persecution, humiliation, discrimination and assimilation – have proved to be indestructible. Few things were more symbolic of that than the presence at the 80th-anniversary commemoration events in Kyiv of Presidents Herzog of Israel and President Volodymyr Zelensky of Ukraine who are both Jewish. Moreover, Jewish religious and cultural life has returned to Ukraine and continues to flourish, as witnessed this week with the revival of the Jewish National Fund in Ukraine and the opening of a KKL-JNF office in Kyiv. Hennadiy Nadelenko, the immediate past ambassador of Ukraine to Israel, who was Dean of the Diplomatic Corps and spent ten years in Israel, was the second ambassador from the former Soviet Union to be inscribed in the Golden Book of the JNF.

The first was Alexander Bovin, who thirty years ago was the first ambassador of Russia and the last of the USSR, after the USSR renewed diplomatic relations with Israel which had been severed in 1967 in the immediate aftermath of the Six Day War. Bovin had done much to repair the relationship during his five years in Israel, and Nadelenko had done much to forge good relations on many levels between Israel and Ukraine.

The ceremony marking the opening of the KKL-JNF office was attended by Herzog, the Vice-Chairmen of Keren Kayemeth LeIsrael-Jewish National Fund Arnan Felman and Robert Tabiev, the Chairman of the World Zionist Organization and acting Chairman of the Jewish Agency Yaakov Hagoel, Ambassador to Ukraine Michael Brodsky and leading figures from Jewish communities from around the world. There has been no KKL-JNF presence in Ukraine since just before the Second World War.

The reconnection began with a recent request from the Ukrainian government for cooperation, transfer of knowledge and technology for the establishment of new forests and the planting of billions of trees throughout Ukraine, as part of a government program to address the climate change crisis.

In addition to helping the Ukrainian government in this respect, KKL-JNF will be engaged in outreach to the Jewish community with the aim of enhancing Jewish identity and a knowledge of Jewish history, as well as strengthening the bonds between Ukrainian Jewry and the State of Israel.

Daroff, who studied the history of Eastern European Jewry and the Holocaust at Jagiellonian University in Krakow, Poland, remarked, “The Holocaust for many decades served as a dark warning to Europe, a sign of where antisemitism can lead. But American Jewry has a long and proud reputation of coming to the aid of our coreligionists in Europe, and it still has an important role to play today. One of our greatest priorities in Europe is to preserve and increase awareness of the Shoah by means of educational programming.”

■ IN JUST over two weeks, whoever may be interested will learn the identity of the new Executive Chairman (or woman) of the Jewish Agency. Off the nine people vying for the post, five are women. Although they are not the first women to run for the office, they represent the largest number at any one time, and the fact that they outnumber the male contenders proves that the glass ceiling has well and truly been broken. While it is understood that whoever is chosen to succeed Herzog, who vacated the post when he became the 11th President of Israel, will have to demonstrate leadership abilities, it’s difficult to guess what will give any one of them an edge over the others. Four of them speak at least three languages. Most have political backgrounds, some have distinguished military backgrounds, two have served both in politics and as diplomats, two are academics and at least four have law degrees. Six of the nine were born in Israel. Their ages range from 73 to 43. In chronological order they are Uzi Dayan, Yaffa Zilbershats, Michael Oren, Elazar Stern, Michal Cotler-Wunsh, Danny Danon, Fleur Hassan-Nahoum, Omer Yankelevich and Irina Nevzlin. Of men who have headed the Jewish Agency over the last 35 years – only one, Sharansky – was not born in Israel. Simcha Dinitz, Ze’ev Bielski, Avraham Burg, Sallai Meridor and Herzog are all sabras. If Bennett’s choice, Elazar Stern, happens to get the job he will be replaced in the Knesset by Yavne Councilwoman Ronit Ehrenfreund who will be the first woman to publicly enter the Knesset as a lesbian. The late Marcia Freedman – who died recently – was also a lesbian, but came out of the closet only after leaving the Knesset.

■ HERZOG will barely have time to rest up after his emotionally draining visit to Ukraine. He has a busy week of conferences next week including Yediot Aharonot’s conference on immigrants which is cosponsored by the Jewish Agency and the Ministry for Aliyah and Integration; the first Israeli Conference for Shabbat, Society and Economy; and the 10th annual Jerusalem Post Conference plus a host of other meetings and activities. What will be different at the Shabbat Society and Economy conference, is the rare inclusion of a husband and wife among the speakers. Likud MK Yuli Edelstein, a former minister of immigrant absorption, and his wife, Nevzlin, who heads the governing board of the ANU Museum and is a candidate for the head of the Jewish Agency will each be among the speakers, possibly as a curtain-raiser for a new political powerhouse. Also at this conference, former US Senator Joe Lieberman will launch the Hebrew edition of his book about the Sabbath – The Gift of Rest.