They met along the Celtics sidelines, a playful shove giving way to a firm handshake and a warm embrace. Six months ago the idea that Jayson Tatum and Jaylen Brown would be celebrating a series-clinching Game 7 win over Milwaukee, would be gearing up for a trip to the conference finals seemed improbable, laughable even, not with Boston stumbling through the first two months of the season and whispers to break up the Celtics’ 20-something wings growing louder by the loss. Then, the Celtics’ season seemed snake bitten. In the final moments on Sunday, as Tatum and Brown headed to the bench, with the roar of more than 19,000 fans greeting them, it felt redeemed.

What a game. What a series. Seven games is the most the Celtics and Bucks could play, but no one would have griped if they went seven more. This wasn’t basketball. It was boxing, in high tops. Boston’s stars, Tatum and Brown, showed up. Milwaukee’s top duo, Giannis Antetokounmpo and Jrue Holiday, did, too. There was Al Horford’s 30-point effort in a series-salvaging Game 4. Bobby Portis’s 14-point, 15-rebound output in a thrilling comeback in Game 5. On Sunday it was Grant Williams—Grant Williams!—leading Boston’s three-point assault, snapping Stephen Curry’s record for three-pointers attempted in a Game 7 along the way.

Before Williams’s heroics, before Boston buried Milwaukee under an avalanche of threes, this game was close. Very close.

The Bucks built a 10-point lead early. Antetokounmpo made six of his first nine shots, overpowering Celtics defenders on his way to the rim. He scored or assisted on 33 of Milwaukee’s 43 first-half points, keeping the Bucks within five at the break.

And then … the floodgates opened. The Celtics scored 31 points in the third quarter. Boston has lived and died by the three-point shot all season. The Celtics went 18-50 in a Game 1 loss. They were 17-43 in a Game 6 win. On Sunday, with Milwaukee committed to keeping Brook Lopez in the paint, they connected on 22 of 55, scoring 54 more points on threes alone than Milwaukee, which made just four of 33—the second worst three-point shooting percentage in a playoff game ever.

“We knew we were going to persevere,” Williams said. “We’re a group that accepts adversity. We haven’t put a full game together this whole series. So we said, ‘Why not now?’"

Williams had never attempted more than nine three-pointers in a game before Game 7. On Sunday, he tossed up 18. Part of the Bucks’ defensive strategy has been to leave Boston’s big men open on the perimeter. Horford made Milwaukee pay for it in Game 5. In Game 7, it was Williams’s turn. He made his first three 20 seconds in. Then there was an offensive foul. And a turnover. And a 23-footer that didn’t have a shot. Williams began to hesitate. He passed up an open three. And then another. During a timeout, Udoka gave him an earful.

“I told him to let it fly,” Udoka said. “They’re disrespecting you more tonight than earlier in the series … I basically said, ‘Shoot the ball. What else can you do? Stop driving into crowds. Take the shots that they are giving you.’”

Williams did. "It’s tough to get in your own head when your entire team, 15 people, walk up to you and tell you to keep shooting,” said Williams. He finished 3-8 in the first half. He made four of his 10 attempts in the second. With the Bucks determined not to let Tatum and Brown beat them in the paint, Williams took advantage of the airspace beyond the arc.

“That’s what they were giving us,” Brown said. “It was almost like they were using [Lopez] to stop me and Jayson from getting what we wanted.”

Boston’s defense has been its backbone all season. In Game 7, it was suffocating. Holiday scored 21—but needed 21 shots. Antetokounmpo, roughed up by Williams, Horford and Smart, was 10-26. Grayson Allen and Wesley Matthews were 1-11 combined. Only one Milwaukee player, Portis, scored more than two points off the bench. The Bucks had the NBA’s third best offense during the regular season. The Celtics held them under 90 points—twice. Over the final 25 minutes, Milwaukee scored 38 points.

Udoka is the biggest reason why. This team looked dysfunctional in November. It looked lifeless by Christmas. Udoka seemed to be in over his head. He routinely tattooed his team in public. Some wondered if Brad Stevens would return to the bench.

But there was a method to the madness. Udoka was implementing a new defense, one built around Boston’s ability to switch. Offensively, he was breaking the team of bad habits. The Celtics had atrophied some under Stevens, who in his new role as team president was the first to recognize it. Stevens, a career-long coach with a softer touch, hired Udoka, an ex-player, a longtime assistant who shoves aside the carrot in favor of the stick.

In January, the defense clicked. The ball movement picked up. Tatum played like an MVP candidate. Brown regained his All-Star form. A midseason trade for Derrick White added an experienced playmaker to the backcourt. A trade deadline deal for Daniel Theis reinforced the frontcourt. Boston had the NBA’s third best record after January 1. The Celtics finished first in the NBA in defensive rating and a fraction of a point behind Phoenix for the lead in net rating. In the first round, the Celtics’ defense held Kevin Durant under 40% shooting. Antetokounmpo, a 55.3% shooter during the regular season, shot 45.5%.

“He just has confidence,” Brown said. “He never gets too high and never gets down. He has so much poise. He makes adjustments, but he doesn't make over-adjustments. For a first-year coach, it’s unheard of.”

It’s on to Miami now, and Celtics-Heat figures to be another rock fight.

“Milwaukee did a really good job of preparing us for what's next,” Brown said.

The physical defense that wore down Antetokounmpo will be channeled towards Jimmy Butler. Udoka, after outmaneuvering Mike Budenholzer, will match wits with Erik Spoelstra. It has the potential to be a great series.

“Miami is a really tough team,” Brown said. “A team full of dogs. They're going to be ready. But so are we.” 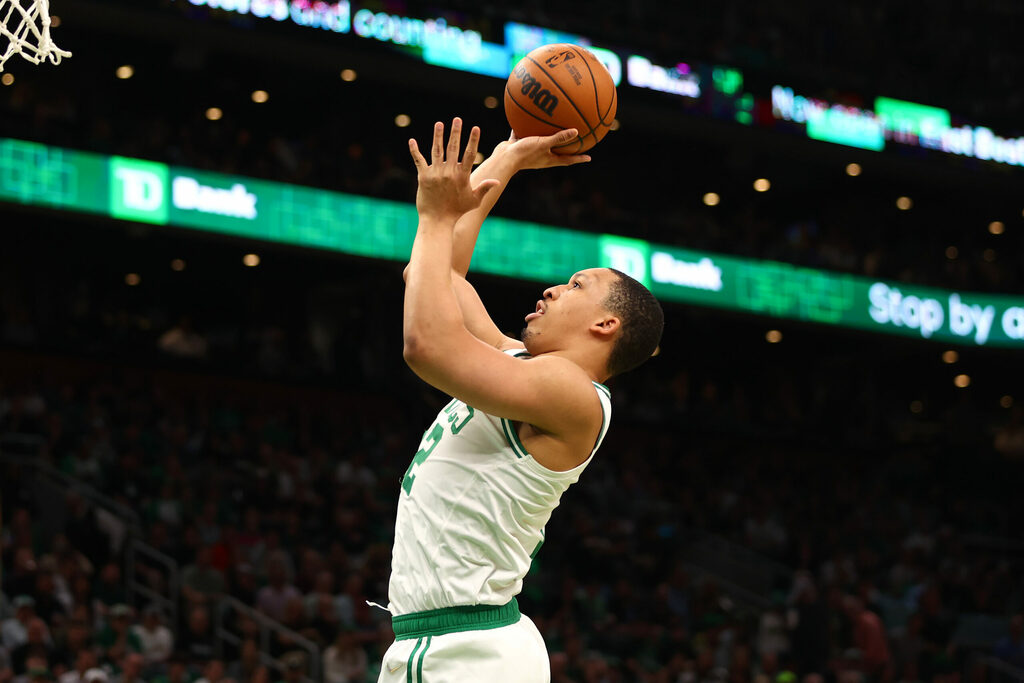 Jaylen Brown jokes about Grant Williams’ record-setting Game 7 performance, says we should ‘call him Grant Curry now’
Grant Williams was a sharp-shooter during Game 7 of the Celtics-Bucks series. The Tennessee product broke or tied several records…

The former Vol picked up the moniker after playing like another Charlotte native currently playing for the Golden State Warriors.