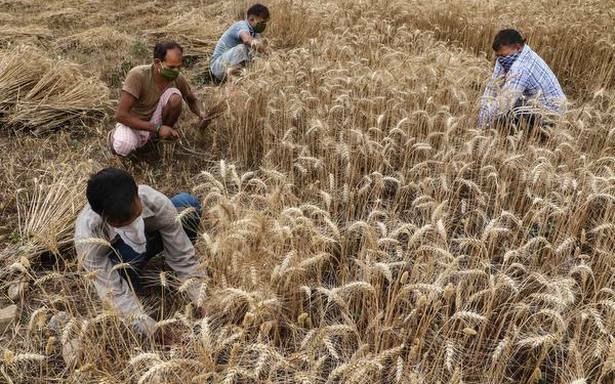 The Centre has increased the minimum support price (MSP) for wheat for the upcoming rabi season to ₹2,015 per quintal, a 2% hike from the ₹1,975 per quintal rate of last year.

Oilseeds and pulses such as mustard, safflower and masoor dal saw higher MSP increases of up to 8% in a bid to encourage crop diversification, according to a statement on the decision of the Cabinet Committee on Economic Affairs on Wednesday.

The MSP is the rate at which the government purchases crops from farmers. Currently, rates are fixed for 23 crops, including six crops during the upcoming rabi or winter season for which sowing will begin in October.

In a tweet, Prime Minister Narendra Modi said the government had taken another big decision in the interest of farmers by increasing the MSPs of rabi crops. He said the increased MSPs would ensure remunerative prices to farmers and also encourage them for sowing operations.

Agriculture Minister Narendra Singh Tomar said that Wednesday’s decision was proof that the government was committed to the MSP system. “Some people who are spreading the illusion that MSP will be abolished should also learn from this decision. After the passage of the new agricultural reform laws, not only have the rates of MSP increased but there has also been a continuous increase in the procurement by the government,” he said in a statement.

Mr. Tomar said the government had decided to fix the MSPs of all kharif and rabi crops at least 1.5 times more than their production cost and this has helped in enhancing the farmers’ income.

The Centre’s decision to procure pulses and oilseeds apart from wheat and paddy is also benefitting farmers, he added. “The expected returns to farmers over their cost of production are estimated to be highest in case of wheat and mustard seed (100% each), followed by lentil (79%), gram (74%); barley (60%) and safflower (50%),” an official statement said.

The government also said that concerted efforts were made over the past few years to realign the MSPs in favour of oilseeds, pulses and coarse cereals to encourage farmers to shift to a larger area under these crops and adopt best technologies and farm practices to correct the demand-supply imbalance.

Farm unions under the Samyukt Kisan Morcha pointed out that the rate of inflation is higher than the MSP hike for most crops, arguing that in real terms, the MSP for wheat has actually dropped 4%. They are now in the tenth month of protest against the three farm reform laws which they claim will hurt the MSP regime, and have also demanded a legal guarantee for MSP.

The RSS-affiliated farm union Bharatiya Kisan Sangh (BKS), which held a nationwide agitation on Wednesday, welcomed the MSP hikes, but pointed out that most farmers would not get the benefits as they were still unable to sell their crops at that rate.

“We welcome this attempt to diversify crops and encourage pulses and oilseeds like masoor and sarson (mustard). The water and labour costs are lower for these crops, and since the MSP has been increased, profits should be higher for farmers,” said Badrinarayan Chaudhary, general secretary of the BKS. “

Our andolan remains because the government does not procure crops from all farmers. We still want a law which will guarantee remunerative prices for all,” he added.