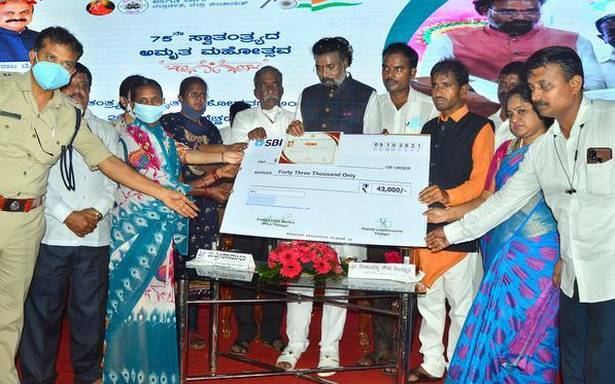 Minister for Transport and Scheduled Tribes Welfare B. Sriramulu has said that the State government was committed to developing Kalyana Karnataka region.

Yadgir district would get more development projects as now the Union and State governments have built Ekalavya Model Residential School at a cost of ₹20.2 crore with an intention to provide better education to the children belonging to Schedule Castes and Scheduled Tribes.

He was speaking after inaugurating the programme to distribute cheques to beneficiaries under various schemes at Imperial Garden in Yadgir on Saturday.

Mr. Sriramulu has been appointed as chairman of the Cabinet Sub-Committee to supervise and review development works being taken under the special status granted under Article 371 (J) of the Constitution to KK region.

“As per instructions from Chief Minister Basavaraj Bommai, I will conduct a meeting with officials of the seven districts in the region shortly to review the progress of development projects,” he said.

He said he had a vision to take up development works in education, social, and economic sectors for the people of SC and ST categories. “A sum of ₹1,435 crore will be earmarked to implement various projects aimed at development of STs,” he added.

The Minister handed over cheques to the beneficiaries of various schemes and said 36,335 students were housed in 404 hostels and residential schools in the State and 1,860 students were there in 12 residential schools in Yadgir district alone. Scholarships totalling ₹209 crore had been provided to 6 lakh students and scholarships totalling ₹5 crore had been sanctioned to 18,000 students in Yadgir district. Prize money of ₹77.17 crore was given to 28,157 meritorious students, including 524 students in Yadgir.

The Minister said that to empower the tribal people, the Rights of Records were given to 15,741 people who have been residing in the forests for several decades. Borewells had been drilled in the land of 7,477 people in the State under Ganga Kalyan scheme and it had been proposed to drill 112 borewells in Yadgir district. As many as 1,069 landless beneficiaries, including 41 in Yadgir district, were sanctioned land under Bhoo Odetana Yojana. Financial aid was given for sheep rearing and self-employment to uplift the economic status of people belonging to ST category.