House Republican leadership traveled to southwest Pennsylvania on Friday to unveil their “Commitment to America,” a policy platform broadly outlining the party’s goals should they reclaim control of the chamber after the midterm elections.

“We wanted to lay out a bold conservative vision to show the country there’s hope again. There’s not just one direction that’s far left,” said House Minority Leader Kevin McCarthy. “The Commitment to America is going to show the country: If you give us a Republican majority in the House, these are the things we will do.”

The plan centers on politically beneficial policies that would be policy long shots even if Republicans take back both the House and the Senate this fall, promising lowered inflation, increased fossil fuel drilling, a return to Trump-era immigration policies and an anti-crime agenda that includes a “crackdown on prosecutors and district attorneys who refuse to prosecute crimes.”

The platform also includes red meat for the GOP base, promising to boost parental control over school curricula, investigate the origins of COVID-19, defend the Second Amendment and ensure “that only women can compete in women’s sports,” McCarthy said.

“I am a mom to my 1-year-old, Sam, and I will tell you, moms and dads across this country, they know that parents are the primary stakeholders in their kids’ education, which is why we will pass a parents’ bill of rights,” said Conference Chair Elise Stefanik, R-N.Y.

The announcement comes as once-rosy predictions of a sweeping red tide in November’s elections have faded in recent weeks and Democrats have outperformed expectations in late-in-the-cycle special elections this summer. President Joe Biden’s approval rating — a leading indicator of his party’s chances in a midterm election — has rebounded of late, the enthusiasm gap between Republican and Democratic voters has narrowed, and polls now show independents edging toward Democrats. Still, most prognosticators believe the GOP will narrowly win the House this year.

While inflation rose sharply over much of the past year, the last two months have shown a leveling off, with little-to-no month-to-month increases, driven in large part by a sharp decline in gas prices. At the same time, Democrats have strung together a series of legislative wins recently, including a major climate change and health care bill.

“That very first day that we’re sworn in, you’ll see that it all changes, because our very first bill, we’re going to repeal 87,000 IRS agents,” McCarthy said, repeating a widely debunked and inflated figure.

The plan also promises to dial back spending, castigating Democrats for passing the $1.9 trillion American Rescue Plan in March 2021. During the Trump administration — including two years of unified GOP control in the 115th Congress — federal spending grew every year, even before accounting for about $4 trillion in COVID-19 relief spending enacted with overwhelming bipartisan support in 2020.

Republicans also pledged to support the hiring of 200,000 new police officers by providing hiring bonuses, blaming an increase in crime since the onset of the COVID-19 pandemic on liberal policies in Democratic-led cities. Violent crime, however, is up across the nation, including in rural areas. On Thursday, the House passed legislation that would provide smaller police departments more funds for recruiting and training officers. While bipartisan, more Republicans (55) than Democrats (9) opposed the bill, a version of which passed the Senate unanimously in August.

Unlike the GOP blueprint that National Republican Senatorial Committee Chairman Rick Scott of Florida released earlier this year, the House leadership’s plan won praise from Senate Minority Leader Mitch McConnell, who tweeted that it would “bring the people’s priorities back into the people’s House.”

The Commitment to America is roughly modeled after then-Rep. Newt Gingrich’s “Contract with America” in 1994. While that platform helped Republicans go on to gain 54 seats and control of the House, the ensuing governance period was riven by deadlock, government shutdowns and the unpopular impeachment of President Bill Clinton.

The new House GOP plan doesn’t shy away from abortion, despite it having become the No. 1 issue for Democrats in this election after the Supreme Court’s decision in Dobbs v. Jackson Women’s Health Organization. The CTA’s “pocket card” promises to “protect the lives of unborn children and their mothers.” The Associated Press recently reported that Democrats have spent $124 million in television ads referencing abortion, more than double the party’s second-most mentioned topic, “character.”

During Democrats’ prebuttal press call Thursday evening, Rep. Sara Jacobs of California noted that Republicans have long sought to ban abortion. “They are hellbent on stripping us of our freedom to make decisions about our bodies, decisions that should only be made between a person and their doctor, and decisions that out-of-touch politicians — and frankly, any politician — should have no part in,” she said.

Biden responded to the Republican plan Friday afternoon, criticizing several planks of their policy plan but seeming to take particular umbrage to their arguments about public safety.

“Leader McCarthy talked about … wanting … a nation that’s safe. Let’s look at what Republicans have done to make it safe. They voted against virtually everything we’ve done to reduce crime and keep communities safe,” Biden said at a DNC event in Washington, citing funding enacted by Democrats to support local police payrolls during the height of the COVID-19 pandemic. “We’re in a situation where now the MAGA Republicans are calling for … defunding the FBI.”

“I know some of you weren’t happy with me. I didn’t think we should defund the police — I’ve never believed that, and I said so at the time — but I sure as hell don’t think we should defund the FBI either,” Biden said, before repeating what has become a familiar refrain on the campaign trail: “Don’t tell me you support law enforcement if you can’t condemn what happened on January the 6th.”

Oversight on the menu

Even if the GOP does reclaim control of both chambers, most expect a light lawmaking agenda, given Biden’s ability to veto legislation. “In split government, this is going to be a very major oversight agenda,” outgoing House Administration Committee ranking member Rodney Davis, R-Ill., recently told Roll Call. “You’re not going to pass a lot of major bills.”

Instead of sending legislation to the White House, a GOP-controlled Congress will send subpoenas; oversight will dominate the schedule. The Republican House plan highlights what the party expects to investigate: the chaotic withdrawal of U.S. and allied forces from Afghanistan, federal agencies tasked with combating fentanyl trafficking, and the origins of COVID-19.

The Friday event doubled as a rally for McCarthy’s bid to be speaker of the House next year, should his party prevail in November. Republican Rep. Guy Reschenthaler, who represents the working-class town where the event was held, introduced McCarthy by highlighting the caucus’ unity in advance of the elections.

“We’ve got members here from New York all the way to the border with Tony Gonzales [of Texas]. We’ve got people that have different approaches, all the way from David Joyce [of Ohio] to Marjorie Taylor Greene [of Georgia], but we’re all united behind Kevin McCarthy,” Reschenthaler said. “He’s the one who unified the party. He’s the one that came up with this plan.”

That unity may be a double-edged sword for battleground Republicans, whom Democrats have tried to link to Greene’s vituperative brand of conservatism.

Niels Lesniewski contributed to this report. 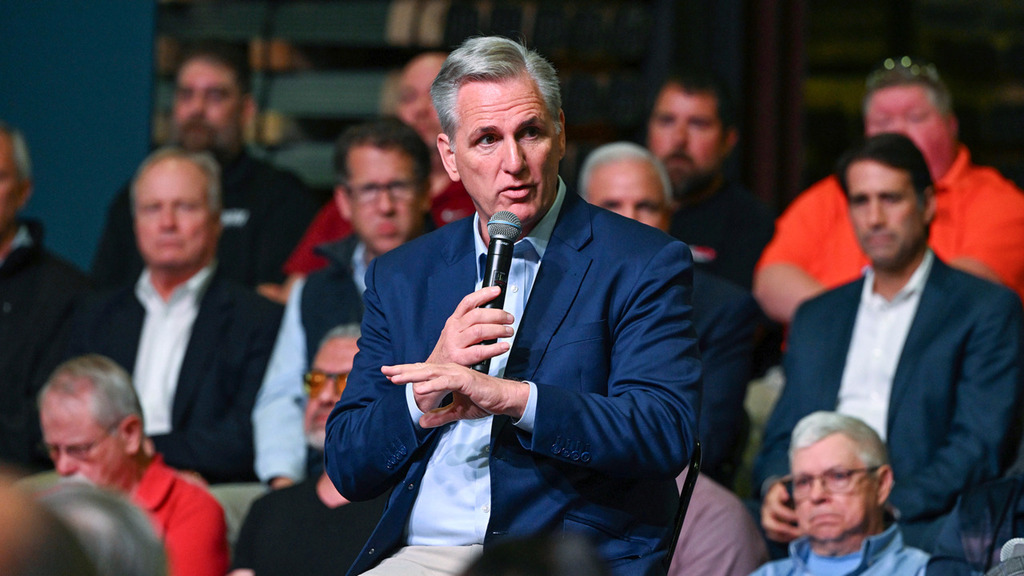 House GOP deploys a 2023 agenda it can use in November
Republicans say their "Commitment to America" is a guide to a future majority. Key provisions were tested to serve as…

Politico
From analysis to the latest developments in health, read the most diverse news in one place.
Republican leadership unveils its 'Commitment to America' with backdrop of a Pa. factory
PITTSBURGH — Using a factory floor in Monongahela as a backdrop, U.S. House Republican leaders, on a no-holds-barred pursuit to…

Big on ideas but short on policy specifics, the agenda keeps with a tradition established with 1994's "Contract with America"…

The House minority leader introduced the Republicans’ ‘Commitment to America’, focusing on Biden and not on Trump

The Guardian - US
One place to find news on any topic, from hundreds of sites.
House Republicans' agenda gamble

Democrats are happy to campaign against the GOP plan.