A Google employee who became the most visible opponent of a company contract with the Israeli military said on Tuesday that she would resign after claiming Google had tried to retaliate against her for her activism.

The employee, Ariel Koren, a marketing manager for Google’s educational products arm who has worked for the company for seven years, wrote a memo to colleagues announcing her plan to leave Google at the end of the week.

She spent more than a year organizing against Project Nimbus, a $1.2 billion agreement for Google and Amazon to supply Israel and its military with artificial intelligence tools and other computing services. Koren, 28, helped circulate petitions and lobby executives, and she talked to news organizations, all in an effort to get Google to reconsider the deal.

Then, in November, she said, came a surprising ultimatum from Google: Agree to move to Sao Paulo, Brazil, within 17 business days or lose your job.

Koren marketed educational products to Latin America and was based in Mexico City before moving to San Francisco during the pandemic. But, she said, there was not a clear business justification for the mandated move or its urgency, and a supervisor in Brazil told her that employees in Sao Paulo were working from home because of the pandemic.

Google and the National Labor Relations Board investigated her complaint and found no wrongdoing.

Fifteen other Google employees posted audio testimonies to YouTube on Tuesday asking the company not to work with Israel and criticizing Google’s treatment of Palestinians and its censorship of employees who support them. All but two of the workers spoke anonymously. They released their remarks to coincide with Koren’s departure from the company.

“Google systematically silences Palestinian, Jewish, Arab and Muslim voices concerned about Google’s complicity in violations of Palestinian human rights — to the point of formally retaliating against workers and creating an environment of fear,” Koren wrote in the letter explaining her decision to resign.

Shannon Newberry, a Google spokesperson, said in a statement that “we prohibit retaliation in the workplace and publicly share our very clear policy.”

“We thoroughly investigated this employee’s claim, as we do when any concerns are raised,” she added.

Koren is the latest in a string of Google employees who have accused the company of retaliation for their activism. Two, Claire Stapleton and Meredith Whittaker, resigned in 2019 and said they had faced retribution after organizing a worker walkout in 2018 to protest the company’s sexual misconduct policies.

In November 2019, Google fired four employees who had been involved in a variety of organizing efforts at the company. A fifth worker was fired soon after for creating a pop-up message on Google’s corporate network notifying workers of their protected right to organize. The National Labor Relations Board said Google had illegally fired two of the workers, and illegally surveilled and retaliated against others.

The company also pushed out two artificial intelligence researchers, Timnit Gebru and Margaret Mitchell. Both had been part of the company’s Ethical AI team and had criticized Google’s technology in a research paper. Gebru had separately said that the company’s diversity efforts were insufficient.

When asked about the firings, Google reiterated previous statements that it had not retaliated against the workers, and it said that, in some instances, the dismissed employees had violated data security policies.

Google made news recently for a different type of firing — letting go of an engineer, Blake Lemoine, in July after he claimed the company’s AI was sentient and leaked corporate documents.

Google’s growing reputation for punishing employees who are publicly critical of the company is a notable change for an employer that once nourished an outspoken workplace culture. Google had long welcomed wide-ranging dialogue on its internal, online message boards and encouraged employees to debate executives’ decisions in companywide meetings and other forums.

“Google has drawn enough of a line in the sand of either you’re with us and you’re on board or you’re out,” Stapleton said in a recent interview.

Koren, who is Jewish, opposed Nimbus after it was announced in April 2021 because she was concerned that Google’s technology could help the Israeli Defense Forces surveil and harm Palestinians. The contract went into effect in July 2021 and lasts for seven years.

Neither the company nor Israel has detailed the capabilities Israel will receive, or how they will be used, but a Google slide deck for training Nimbus users included software that Google claims can recognize people, gauge emotional states from facial expressions and track objects in video footage. The Intercept earlier reported details of the slide deck. (A spokesperson said the company did not sell “general purpose” facial-recognition technology.)

“We are proud that Google Cloud has been selected by the Israeli government to provide public cloud services to help digitally transform the country,” Newberry said. “The project includes making Google Cloud Platform available to government agencies for everyday workloads such as finance, health care, transportation and education, but it is not directed to highly sensitive or classified workloads.”

Koren and Gabriel Schubiner, another Jewish employee who became a public opponent of Nimbus, were on a mailing list for the Jewish employee resource group at Google, called Jewglers. They shared their concerns with the 3,000 employees on the list and, they said, found a hostile reception from some.

So, they created an offshoot group in 2020, Jewish Diaspora in Tech, which now has 500 members but is not recognized by Google. The group became a center for anti-Nimbus organizing.

Koren said she went on disability leave for depression, anxiety and burnout in July 2021. During her leave, anti-Nimbus organizing intensified, with a public petition, another for Google employees and a campaign supported by two outside, nonprofit groups.

Two weeks before her disability leave was set to end, Koren sat for a televised interview with MSNBC to discuss the protests against Nimbus.

She returned to work in November, she said, and was told that she had three weeks to make a decision about moving to Brazil.

She found a lawyer and filed a complaint with Google’s human resources department, claiming retaliation. Google said it would investigate, which delayed the move. She also filed a retaliation complaint with the NLRB, which dismissed the case for insufficient evidence. Koren said Google had not allowed the board to speak with her manager, while the company said the planned move had been purely a business decision.

In February, she went on another disability leave, and never returned to work. During her leave, more than 700 of her colleagues signed a petition saying that Google had unjustly retaliated against Koren. Roughly 25,000 people signed a public version of the same petition.

In March, the day before The Los Angeles Times published an article about her retaliation claim, Koren said, she received an email from Google’s human resources department, saying that it was aware she had taken her concerns to a public forum and that she should instead meet with the department. Google told the newspaper that it had found no evidence of retaliation before it told Koren, she said.

She had a videoconference in April, she said, with a representative from human resources, who told her that the mandated move to Brazil had been improperly executed and had caused harm — without saying specifically how — but that it had not amounted to retaliation.

“Even though Google has shown a clear pattern of aggressively pursuing military contracts and retaliating against employees speaking out, there’s no way you can be emotionally prepared,” Koren said in an interview.

What some workers say is a crackdown on employee activism has continued to color life inside the company, according to the remarks of the 15 Google employees, as well as interviews with seven workers. They contend that the company unfairly enforces its content moderation rules, creating a double standard: Speech supporting the Israeli government is permitted, while speech supporting Palestinians is flagged and sometimes a punishable offense.

Six Palestinians, who provided anonymized remarks read aloud by colleagues, said they did not feel safe to express their opinions at the company.

“Project Nimbus makes me feel like I am making my living off my family’s oppression,” one of the workers said.

Some of the employees recalled being punished or reprimanded for perceived antisemitism after some colleagues had said it was antisemitic for them to proclaim, “Support Palestine.” One person said a colleague had accused them of antisemitism for self-identifying as a “Palestinian-American.”

One employee who requested anonymity said in an interview that he had been forced to meet with human resources after co-workers repeatedly reported him for antisemitism over several months. He had included an expression in his corporate profile — “From the river to the sea, Palestine will be free” — and took it down when asked to.

He had also discussed on internal forums findings about Israeli policies from the United Nations and Amnesty International; life in Gaza, which borders Israel and Egypt and is home to two million Palestinians; and his belief that Israel is an apartheid state.

He said that he had been given a formal warning and that his performance evaluation had been reduced to “needs improvement.” Though he had never received that lower rating before, he lost a bonus of more than $10,000, and could be fired for another offense, he said. He was told not to post anything that could offend co-workers, so he stopped discussing politics altogether.

The employees who recorded the YouTube videos and who spoke with The New York Times point to Koren’s experience as an indication that they cannot openly discuss their views and keep their jobs. Google did not directly address their complaints in its statement.

Still, Koren said she was encouraged by the show of support.

“When Google and other folks retaliate against workers, it’s about creating a culture of fear,” Koren said. “I think the opposite is true in this case — more workers took a stand.” 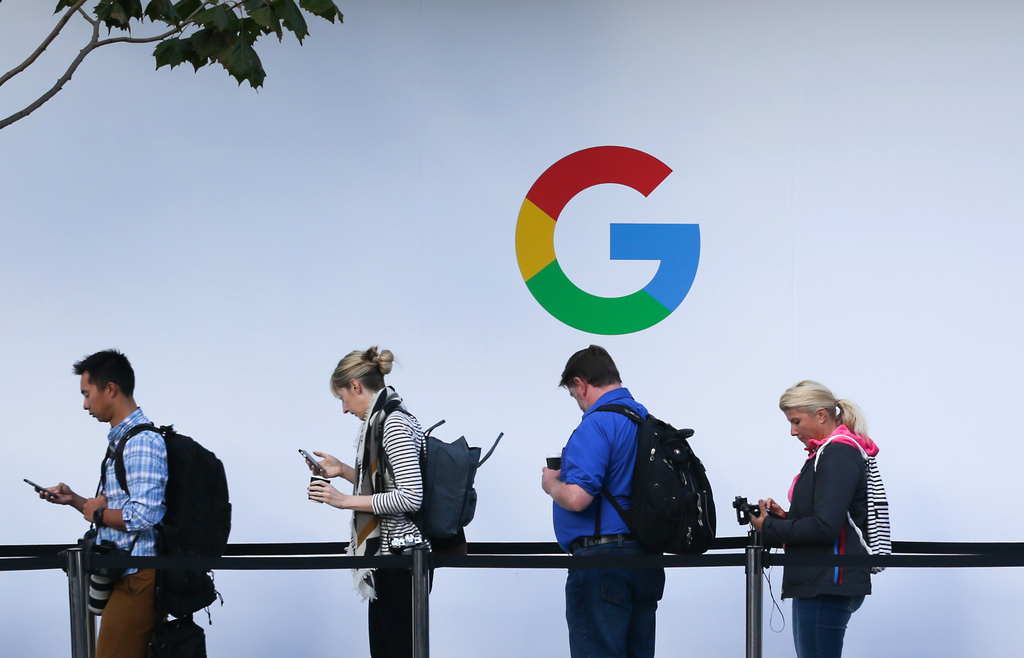 Al Jazeera
From analysis to the latest developments in health, read the most diverse news in one place.
Google Workers Protest $1.2 Billion Israeli Contract

Google employees are ratcheting up pressure on the internet-search giant to abandon its artificial intelligence work with the Israeli government,…

Maale Adumim (Palestinian Territories) (AFP) - After the Russian invasion of Ukraine, Olena and Eduard German, a Jewish couple from…

AFP
Bring it on, says defiant doyen of Palestinian NGOs

AFP
One place to find news on any topic, from hundreds of sites.
Gaza Aid Worker Gets 12 Years on Israeli Terror Charges