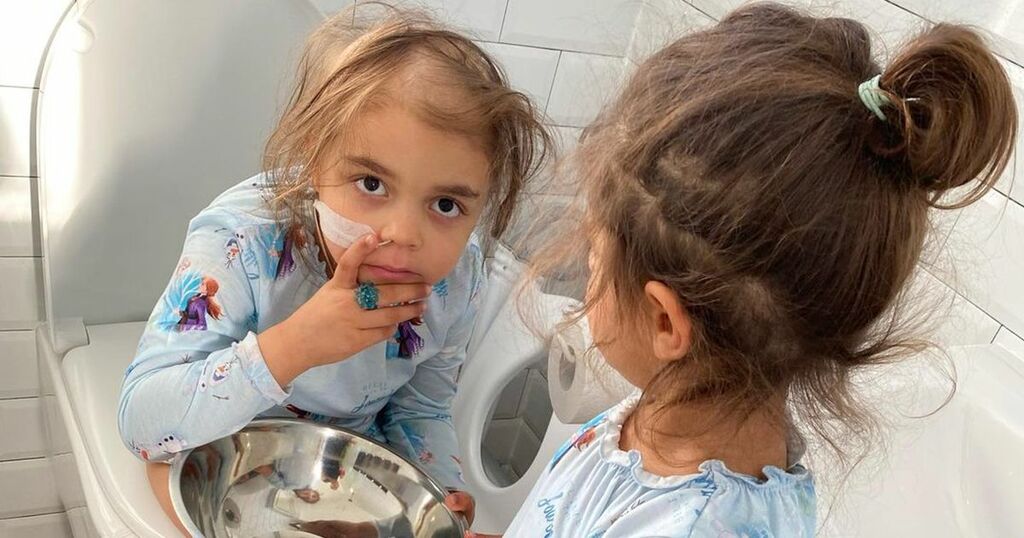 This powerful photo shows a brave five-year-old girl being comforted by her baby sister as she battles childhood cancer.

Little Arianna Solieri was told she has a rare and aggressive form of the disease after complaining about a pain in her back.

Parents, Chris Solieri, 34 and Abigail Solieri, 33, said "it was the most devastating week of our lives” when their daughter was diagnosed.

Since then, Arianna has received six rounds of chemotherapy at Great Ormond Street Hospital in London and is an inspiration to her little sisters Mya, three, and Zara, one.

Her dad said that while Mya does not understand the extent of her sister’s condition, she always offers a helping hand.

Mr Solieri, from Ware, Hertfordshire, said: “One day when Arianna was sick, Mya just jumped up and brought her a bowl because she has seen me and her mum do it.

“She loves her sister and she looks up to her.

“She always wants to be around her but when Arianna is not here, her best friend is missing."

Arianna's parents initially assumed her pain was caused by a new bed in July last year.

But after eight trips to A&E and a scan, they were told the heartbreaking news that she had stage 4 high risk neuroblastoma.

“Arianna was complaining about a pain near her shoulder blades but we just assumed it was muscular after just buying her a new bed," Mr Solieri said.

"After seeing an Osteopath the pain subsided.

“However in November, the pain shifted to her lower back pain and it was clear something was very wrong.”

Overnight, the pain had become so agonising for little Arianna and her temperature had spiked to 40 degrees.

As doctors prescribed antibiotics for a possible kidney infection Arianna’s mum felt that something was not right and her maternal instinct kicked in.

She took Arianna back to the GP as well as A&E eight times in six days until the doctors confirmed her diagnosis.

Mr Solieri said: “In A&E they’re always busy and we were initially told it would be a seven hour wait to see a doctor but my wife insisted further tests were done.

“After an ultrasound on her kidney, the radiologist asked for his colleague and my heart sunk. I knew it wasn’t going to be good news."

Doctors found a tumour above Arianna's left kidney and she was sent to Great Ormand Street two days later which led to her final diagnosis.

Neuroblastoma is a rare and aggressive form of cancer which affects around 100 children a year in the UK, according to the NHS website.

“In a week, we found out our daughter had cancer, her survival rate had now dropped, and she would now have to go under an aggressive treatment plan."

As the determined little girl undergoes her treatment, Arianna is also excited for the arrival of her new sister who is due around her sixth birthday in March.

The five-year-old is currently going through an intensive treatment plan including cycles of chemotherapy every ten days.

A GoFundMe has been set up for Arianna as it is likely that she will need further, non-NHS funded treatment in America.

Her father said: “We have high hopes that Arianna will get through this, and she will have no evidence of disease and at that point there is the bivalent vaccine that reduces the risk of it coming back."

Although it is too early in Arianna's treatment plan to sign up, her parents are looking to raise funds immediately as they need the equivalent of £250,000 for the procedure in New York.

“Any money raised that isn’t used for Arianna’s care we would like to donate to another family in a similar situation or to the various charities that have helped them along the way,” Mr Solieri said.

Arianna continues to laugh and smile and her love of superhero costumes, especially Wonder Woman which has given her the strength and confidence on the days when this has been incredibly scary.

Her dad said: “She really is a gift; she is perfect in every way. It is horrendous something like this can happen to someone with such a good heart.”