By Madeline Chambers and Paul Carrel 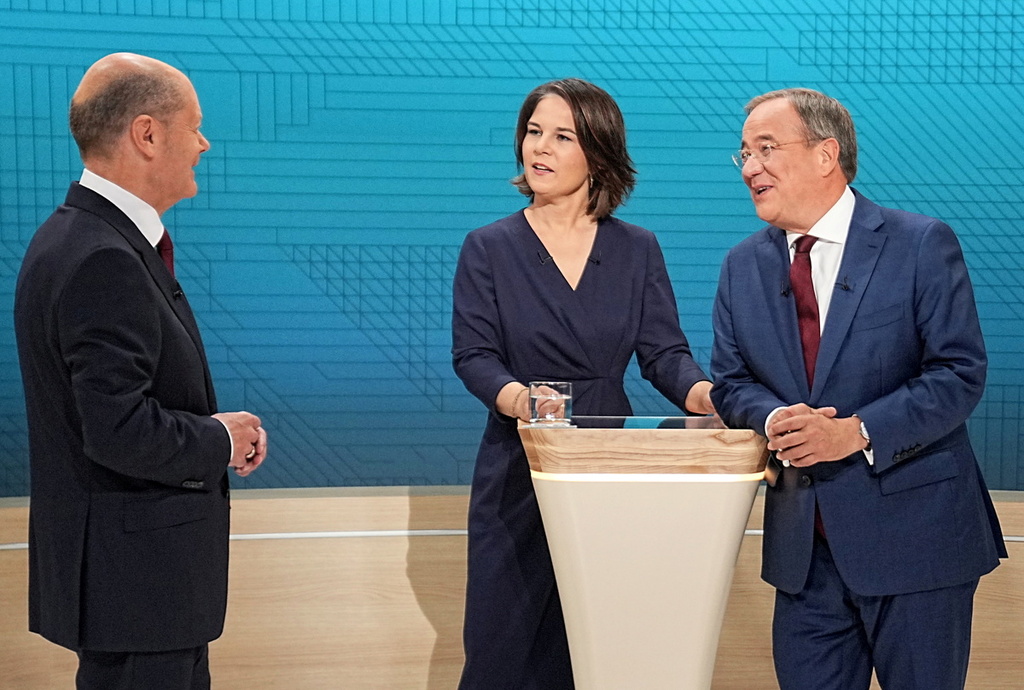 The Social Democrat (SPD) candidate to become Germany's next chancellor beat his conservative rival in a primetime TV debate on Sunday, a snap poll showed, further boosting his campaign to succeed Angela Merkel in an election in two weeks' time.

The SPD leads the conservatives in polls and its candidate Olaf Scholz, currently finance minister, brushed off verbal attacks from Armin Laschet on his record on tackling money-laundering and whether he would ally with a far-left party.

A snap poll for ARD television taken soon after the 90 minute debate showed that 41% of those asked thought Scholz was the most convincing performer, compared to 27% for Laschet and 25% for the Greens candidate, Annalena Baerbock.

Laschet accused Scholz of failing in his supervision responsibilities in light of raids last week on the finance and justice ministries that were part of an investigation into the government's anti money-laundering agency.

"If my finance minister were to work like you, then we would have a serious problem," said Laschet.

An unruffled Scholz cast Laschet a steely look and accused his opponent of twisting facts and being "dishonest" by suggesting there was a probe of his ministry, whereas investigators simply needed information from it.

The conservatives are missing the pulling power of Merkel, a conservative, who is not running again after four election victories and 16 years leading Europe's biggest economy.

An opinion poll on Sunday showed that the SPD had extended their lead over the conservatives. The INSA poll put the SPD on 26%, up a point from a week ago and at their highest rating since June 2017. The conservatives were unchanged at 20% and the Greens were down 1 point at 15%.

In the last three months the conservatives have lost 8-9 percentage points. Laschet, the jovial if uncharismatic leader of Germany's most populous state North Rhine-Westphalia, is trying to make up for mistakes during the campaign.

In a damaging gaffe, he was caught on camera laughing during a visit to a town hit by lethal floods in July. He apologised.

This week's edition of the influential Spiegel magazine has a front-cover picture of Laschet holding his hands in front of his mouth with the headline "Oooops".

In the debate, Laschet also pressed Scholz on whether he would form an alliance with the Greens and the far-left Linke, which opposes NATO and is critical of many aspects of the EU.

Scholz again declined to rule out working with the Linke, arguing first that voters must have their say in the election. However, he made clear that there were clear differences between the parties which would make a coalition very difficult.

"An acknowledgement of transatlantic relations, NATO and the European Union are necessary for a good government," he said.

Baerbock, whose Greens have also lost around 10 percentage points since highs in April and May, said Germany faced a stark choice between a new start or getting bogged down in "more of the same". "Germany can do so much more ... This is a big chance for our country," she said.

Most experts think a three-way coalition is the most likely outcome of the election - a scenario that could take several months to negotiate during which time Merkel remains chancellor.