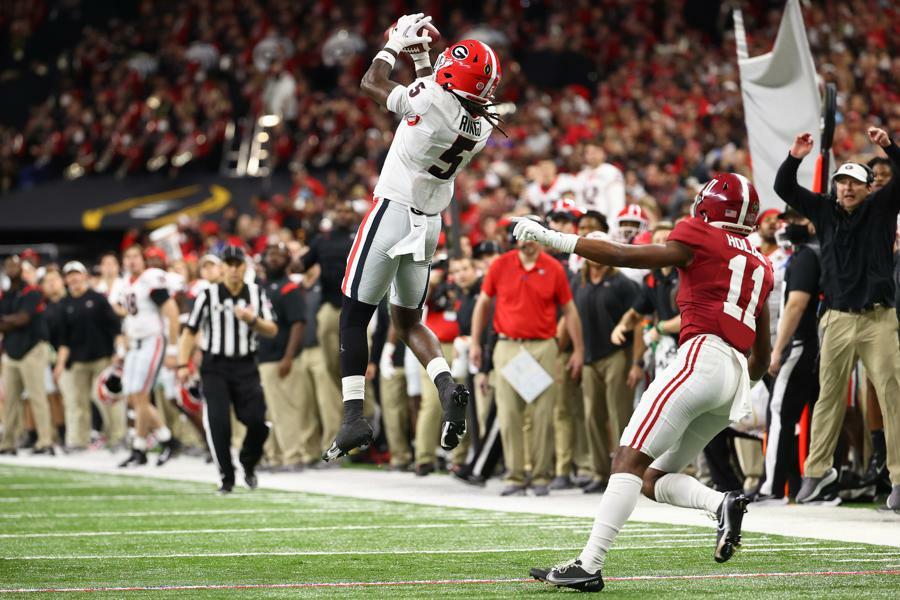 So now that the Georgia Bulldogs conquered Alabama (along with themselves) in college football Monday night at Lucas Oil Stadium in Indianapolis, will they turn this national championship thing into a trend?

Or was this a fluke?

OK, OK. Let’s give the Bulldogs a moment to enjoy their 33-18 come-from-behind, and then come-from-ahead victory in the College Football Playoff title game over Georgia boogeyman Nick Saban and his Alabama Crimson Tide, especially since the Bulldogs won it all for the first time in 41 years.

Which leads us back to that question: Was this the stuff of lightning in a bottle, you know, a blip on the screen, something that happened since maybe Nick had a bad night and Alabama lost Jameson Williams for most of the game to a leg injury, which left the already hobbling Tide without their two otherworldly receivers?

Future NFL star John Metchie (ACL) was the other one.

That said, it’s not as if Georgia lacked the talent to do something like this several times during the past seven presidential elections in the United States, spanning from Jimmy Carter through Donald Trump.

More specifically, Kirby Smart has finished with consensus Top 5 recruiting classes during each of his six seasons coaching Georgia, and he had the nation’s No. 1 collection of recruits at least a couple of times during that stretch. The Bulldog Nation also has spent big to produce a post-Herschel Walker national championship, but it was imaginary until now.

“It's a blessing to be the head coach at University of Georgia, and the men on this team, a lot of them juniors and seniors, will be remembered for a long time. This is a special group,” Smart said after he rasied the trophy for his alma mater, but then he began slapping praise on his present group of Bulldogs as well as on those who were just as gifted but couldn’t find a way to beat Alabama, for instance.

Smart said, “Give them their due when you start talking about (current Georgia players) Jordan Davis, Zamir White, Nakobe Dean, James Cook, a special group that will be remembered for a long time. You know what, on that sideline tonight, I saw (former Georgia standouts) Richard LeCounte, D'Andre Swift, Nick Chubb came over to me. That was the group that was crying in the locker room, and this group made it right for them. Thank you guys, and go Dawgs.”

After Georgia officials convinced Smart to end his 10-year relationship as Saban’s defensive specialist at Alabama and during stops with the Miami Dolphins and at LSU, Bulldog boosters agreed to spend $175 million to upgrade the football facilities on campus.

Never mind Smart’s 2017 team choked away a double-digit lead to Saban and Alabama during that national championship game at Atlanta’s Mercedes-Benz Stadium, located 70 miles from the Bulldogs’ home stadium in Athens. Georgia officials still put Smart in a tie to become the third highest-paid college coach during the spring of 2018 with a three-year extension worth $7 million per season.

Several months after that, Smart’s Bulldogs blew another two-score lead to Alabama, but only in the SEC Championship Game. Then they were embarrased by the Tide in Tuscaloosa during the 2020 regular season before Smart lost a fourth consecutive time to his mentor last month with a 41-24 meltdown at Mercedes-Benz Stadium despite entering the game as the favorite.

Las Vegas also picked Georgia over Alabama in this one, but until Smart actually beat Saban, you had to assume he never would.

F0r the moment, it means Smart was wise to stick with walk-on quarterback Stetson Bennett throughout the bulk of this season instead of giving into the loud cries from the Bulldog Nation for previous starter JT Daniels and his strong arm. Bennett was solid enough to finish fourth in the nation in passing efficiency.

This was more impressive: After Bennett’s fumble early in the fourth quarter Monday night sparked Alabama from a 13-12 deficit to a 18-13 lead, Smart didn’t panic, and neither did Bennett. With Smart showing not even a hint of switching quarterbacks, the people’s non-choice led his team to two touchdown passes, including a 40-yard beauty through the air to Adonai Mitchell.

Even though Kelee Ringo’s pick-six of 79 yards sealed the deal, the most important set of fingerprints on Georgia’s national championship trophy belonged to: (1) the return of Georgia’s dominant defense that stifled the Alabama running game and kept Heisman Trophy winner Bryce Young uneasy in the pocket all night and (2) Bennett who cried at the end.

“Then the tears afterwards, that just hit me,” Bennett said. “I hadn't cried in, I don't know, years, but that just came over me. That's what — when you put as much time as we do into this thing, blood, sweat, tears, it means something.”

Yeah, but is Georgia now the new Alabama, the program that has won six national championships since Saban’s arrival in 2007.

You know where I’m going.