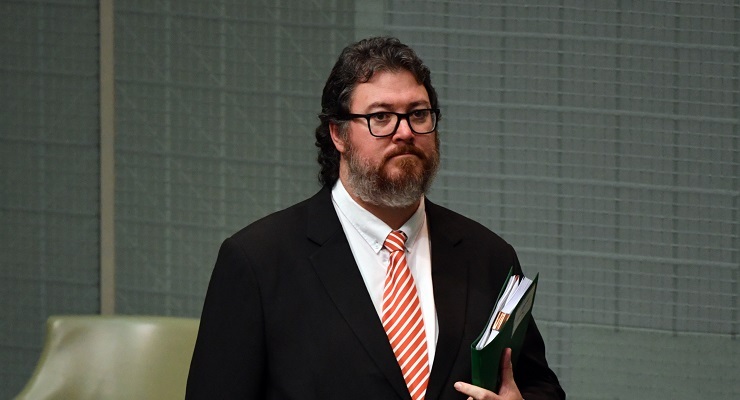 George Christensen is doing everything he can to undermine the government’s handling of the COVID-19 vaccine rollout but Prime Minister Scott Morrison and Deputy PM Barnaby Joyce are nowhere to be seen.

The Queensland LNP member for Dawson has always positioned himself as a maverick. But since announcing he would not contest the next federal election he has ratcheted up his behaviour through attempts to undermine Australia’s vaccine rollout by promoting unproven COVID treatments and cast doubts on the usefulness of vaccines.

Last week, when Australia’s medical regulator the Therapeutic Goods Administration restricted the off-label use of ivermectin to treat COVID, Christensen was furious.

With his fellow misinformation superspreader, parliamentary colleague Craig Kelly, Christensen has been bullish on using the anti-parasitic despite an absence of evidence supporting its use and growing data showing it doesn’t help.

He has also cast aspersions on vaccines — a medical treatment that is proven, safe and effective. He says he hasn’t been vaccinated yet.

On Friday afternoon, after news broke of the ivermectin ban, George Christensen shared images on his Telegram channel of a package of pills he claimed were ivermectin.

“My ivermectin treatment pack. Prescribed by a GP. Now the TGA has banned GPs from prescribing the drug off-label. It’s a decision they will regret,” he wrote ominously.

Later that night he held a live audio call where he told an audience drawn from his 19,000 Telegram followers that they should protest against the TGA by ringing it to demand its decision be overturned. Christensen went on to post multiple times about this.

“I rang the TGA every hour of the day today and couldn’t get through,” Christensen posted on Monday. “I left a message though. Well done to all who joined.”

To put it bluntly, a Coalition MP is spending his time encouraging his followers — among them anti-vaxxers and conspiracy theorists who very clearly hear his dog-whistles — to waste the time of his government’s regulator during a pandemic so much that their phones were unusable. He did so during office hours, he claims, which means the taxpayer is footing the bill for his use of time.

He’s also defending anti-vaxxers arrested for incitement and has used his platform to amplify other conspiracy theorists. He told his online followers to resist workplace vaccine mandates.

Why is he doing this? Perhaps it is his adamant belief in the benefits of a livestock dewormer over a proven vaccine. Or, as Crikey has written before, it may be because he is trying to grow his profile and online reach to pave a way as a conservative influencer post-politics. He already has a much bigger audience than most Australian politicians — meaning his actions already have an outsized influence.

Viewed through that lens, his attempts to gain attention by stunts that allow him to virtue-signal that he is a “truth-teller” (while actually ignoring the truth) plays to the hyper-engaged online conspiratorial and fringe audiences.

The government’s leadership has remained largely mute. Morrison and Joyce have defended him as exercising “freedom of speech”. And that same tired defence was rolled out in response to his latest antics.

“We live in this beautiful thing called a democracy and freedom of speech is centre to that democracy,” Agriculture Minister David Littleproud told ABC News Breakfast on Tuesday.

The reason Morrison and Joyce are unlikely to do anything is because they need Christensen. He is one member of the government that holds a one-seat majority. Christensen’s wild vaccine and ivermectin claims also have the benefit of ensuring that the LNP isn’t outflanked by One Nation in Queensland, which has also tacked towards the conspiratorial claims.

Even if George Christensen’s antics are harming it elsewhere, the government is hanging on, white-knuckled, knowing he’ll soon be a problem of the past.

But this crass political calculus has a cost. People are poisoning themselves using ivermectin. Unvaccinated Australians make up the majority of people dying from COVID.

What it is undeniable is that Christensen is using the benefits of his office — his time, his title, his platform — to encourage people to act in a way that may harm them, and not to do something that would help. He is undermining the government from within.