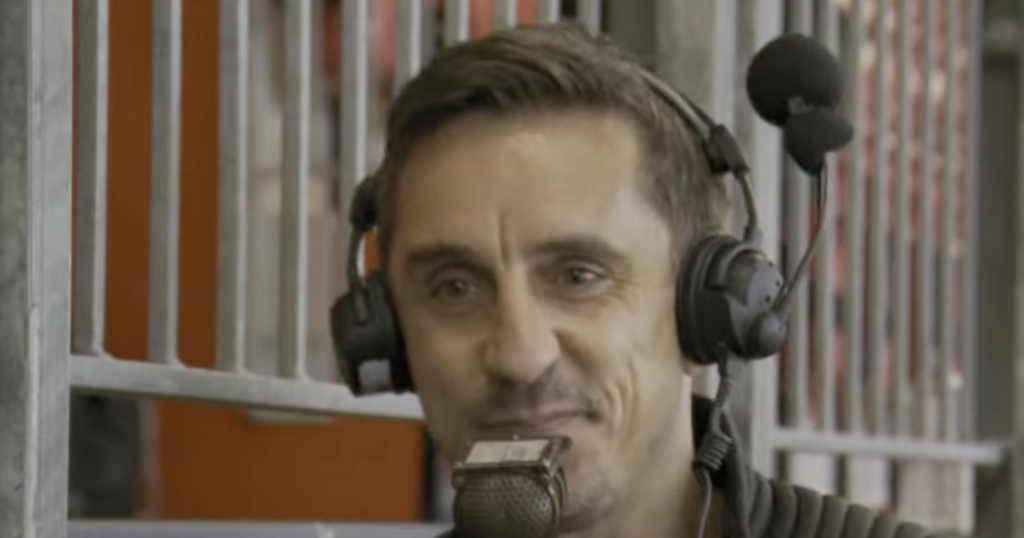 United, who will resume their Premier League campaign with a trip to the King Power Stadium to face Leicester City following the international break, were pegged back by the Toffees on Saturday lunchtime, with Andros Townsend's second half effort cancelling out Anthony Martial's first goal of the season.

The draw meant United have now taken just one point from the last six on offer at Old Trafford, failing to beat both Aston Villa and Everton on their own patch.

Despite the doom and gloom following those two disappointing results, former United defender Neville believes the Reds could take encouragement from Sancho's introduction in the second half. The England winger stepped off the bench after 57 minutes to replace Martial and brought thrust and pace to United's forward line.

The summer signing showed plenty of willingness to get on the ball and run at Everton's defenders, showing glimpses as to why the club was so keen to secure his signature for so long.

Although it has taken him for Sancho to adapt to the demands of the Premier League, his performance against Everton will have lifted his confidence, according to Neville.

"You come away from that game and everyone was disappointed, but I thought Jadon Sancho gave his best 20-minute performance in a Manchester United shirt," Neville said, speaking on his Sky Sports podcast.

"I thought that was the one big positive from the match. Sancho got on the pitch after a difficult start and I think Man United fans are still working him out and still getting to know him, and he’s still working out Man United.

"He’s a £70million signing but he’s been overtaken by [Raphael] Varane and [Cristiano] Ronaldo in terms of the publicity and furore. He’s almost slipped into the club and been a little anonymous in the first few weeks, he’s probably frustrated.

"But I thought he did really well after coming on yesterday [Saturday] and we saw glimpses of his ability, little passes with Ronaldo and stuff like that.

"So I think it’s worth mentioning that we saw a good little period from him and that was a positive.

"He will go into the international break with a little bit of confidence and it will send him off in a happier mood than if he hadn’t featured against Everton."