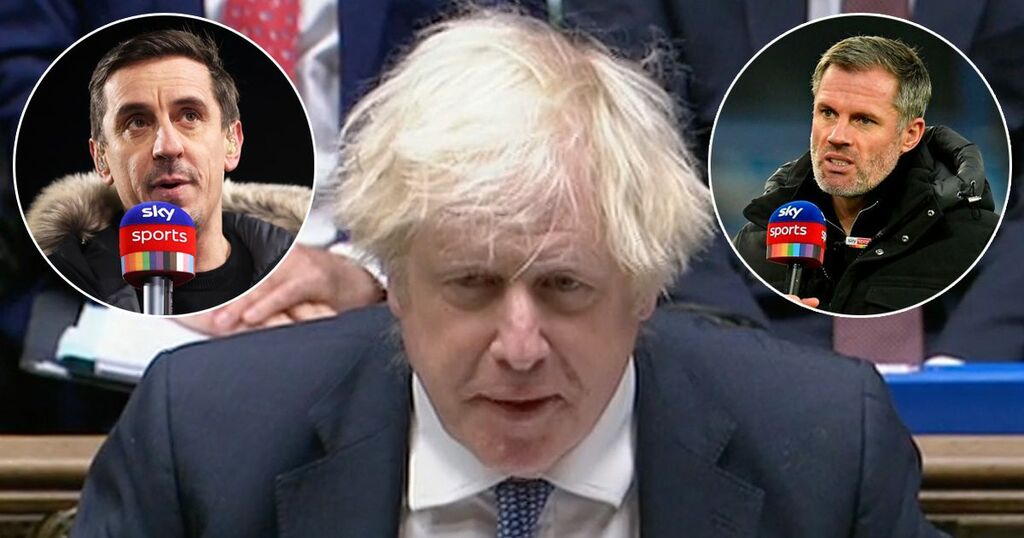 Gary Neville and Jamie Carragher partnered up to mock Boris Johnson and his cabinet over the situation surrounding a number of parties allegedly taking place on the Prime Minister's watch at 10 Downing Street.

The former Manchester United and Liverpool stars are rarely afraid to crack jokes at each other's expense live on air but it was Johnson who was the butt of the joke this time around.

The pair were previewing Crystal Palace's highly-anticipated derby clash away at Brighton & Hove Albion when they doubled up to address the story that has dominated the front pages in recent days.

"It is a peculiar rivalry, but to be fair we get these Friday night football matches, we were at the Brentford one last time it was absolutely fantastic.

HAVE YOUR SAY! Were Neville and Carragher's remarks appropriate? Comment below

"We always seem to just get a massive party."

Neville cut his sentence short, fully aware he had just addressed the elephant in the room before Carragher quickly followed suit.

"Let's be straight tonight though this is not a party this is about work," the ex-Liverpool star added.

"If you speak to Graham Potter, Patrick Vieira, those 22 players on the pitch - they have got to know the difference between work and a party and if they get that wrong and think they are in party mode, they are going to be in big, big trouble."

The comments stem from Prime Minister Johnson's controversial excuse for the event that took place in the Downing Street garden on May 20, 2020.

"I want to apologise. I know that millions of people across this country have made extraordinary sacrifices over the last 18 months," Johnson explained at Prime Minister's Questions earlier this week.

"No 10 is a big department with a garden as an extension of the office which has been in constant use because of the role of fresh air in stopping the virus.

"When I went into that garden just after six on 20 May 2020, to thank groups of staff before going back into my office 25 minutes later to continue working, I believed implicitly that this was a work event.

Neville has been particularly vocal in his dislike for Johnson in recent weeks via his twitter profile.

In response to Sajid Javid addressing Johnson's apology, Neville responded: "People still working from home and kids wearing masks and you lot weren't scared in Lockdown 1, yet terrified us all.