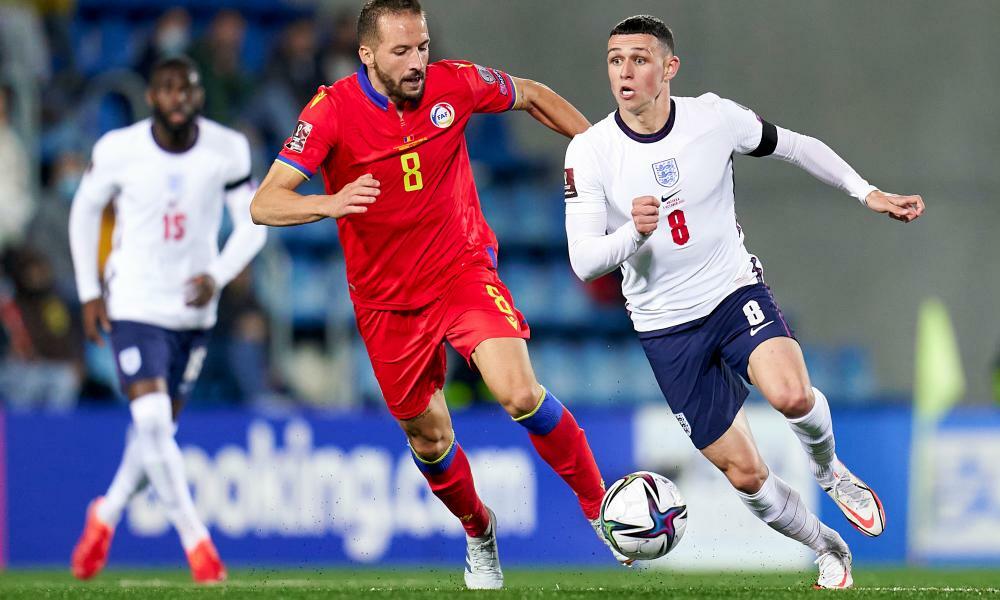 Gareth Southgate said it was “fabulously exciting” to see Phil Foden shine in a deep role as England took another step towards qualifying for the 2022 World Cup by thrashing Andorra 5-0.

Foden started in central midfield in England’s 4-3-3 system and he underlined his ability by dazzling in a new position. The 21-year-old, whose previous appearances for his country have mostly come as a winger, showed off his passing range with a beautiful assist for Bukayo Saka’s goal in the first half and the way that he controlled the game left Southgate drooling.

“Frankly he is one of those players who is effective anywhere across the front line if you play him 7, 11, 10, 8,” England’s manager said. “A traditional 4-3-3 midfield with a 6, 8, 10, if he was the 10 within that but with the capability to drop lower and build the play at times, as he did tonight, I think part of that is just as he gets stronger as well and part of that is the balance of the type of player who might play as the 8 with those qualities.

“But it’s fabulously exciting, isn’t it, when you’re trying to break down a defence, as we have tonight, and you have a player who sees the passes that he sees and hits them and executes them in the way he did. Towards the end of the game there were some lovely combinations between Foden, Mount, Grealish, Saka. The type of play our players are capable of producing is really exciting.”

England, who remain four points above Albania at the top of Group I, had other impressive performers at the Estadi Nacional. Jadon Sancho caught the eye with two assists on the left wing, Jack Grealish scored his first goal at international level and there were further goals from Tammy Abraham and James Ward‑Prowse in the second half.

Yet Foden, who was injured when England lost to Italy in the Euro 2020 final, was undeniably the star turn. The Manchester City player was in the mood from the start and was involved when Southgate’s side went ahead, playing the pass that allowed Sancho to make Ben Chilwell’s first international goal.

“It’s really interesting, the possibilities with him in terms of his positioning moving forward,” Southgate said. “Today was a perfect game because there was no defending needed. You’re only analysing one part of the game because it’s a certain level of opponent. Nevertheless to see the passes and to hit the passes that he did is apparent for everybody.

“As one or two others in that midfield area get stronger I think it’s really exciting how we might evolve as a team in certain matches and how that balance and creativity might progress. I’m not surprised that his performance was the standout. We half expected it when we named the team.”

Southgate was pleased that England, who host Hungary on Tuesday, did not react to repeated provocation from Andorra. “There were lots of challenges and flashpoints where our players had to respond in the right way and in the main they managed to do that,” he said. “That’s always important. No matter what the level of opponent, if you go down to 10 you give yourselves a big hurdle to cross.”

Southgate saved some praise for Sancho, who has struggled since joining Manchester United. “It was not easy for a winger tonight because quite often you were receiving the ball with two, sometimes three, defenders really close,” he said. “You’ve got to pick the right moment to set the ball off and the right moments to back yourself to maybe take one or two of those players out and I thought he did that exceptionally well a couple of times. He showed a lot of the qualities that he has tonight and I know that will come with the club as well.”