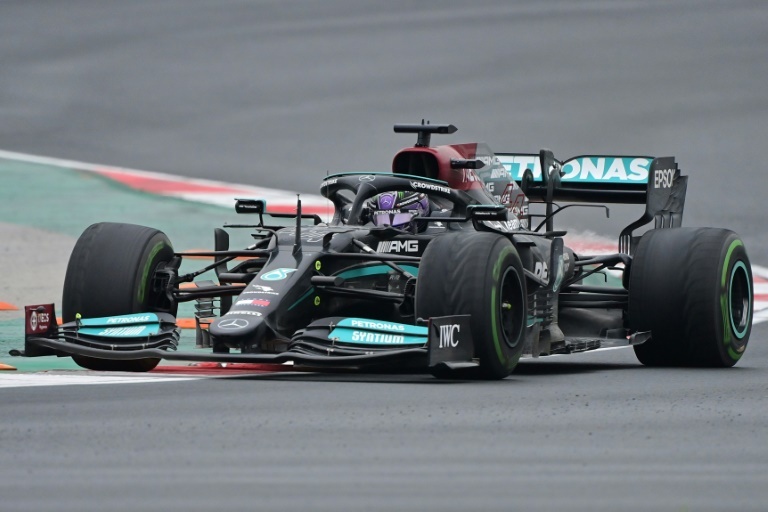 Istanbul (AFP) - The surgical mask hid the gritted teeth but there was no escaping the frustration in the voice of Lewis Hamilton after he was forced to settle for fifth place in the Turkish Grand Prix after a bungled late pitstop.

The seven-time world champion was running third in his Mercedes but the call for him to come in eight laps from the end to change his tyres, cost him two places and the lead in the championship.

At the start of the race he led Red Bull's Max Verstappen by two points but by the time they crossed the finish line, it was the Dutchman, who finished second, who was back in front, leading by six points with six races still to come.

Mercedes argue that Hamilton's tyres on a wet track were wearing badly and that he would have struggled to finish the race, let alone hold off the challenge of Verstappen's teammate Sergio Perez and the Ferrari of Charles Leclerc.

The champion, whose teammate Valtteri Bottas won the race, was not so sure, pointing out that Alpine's Estaeban Ocon completed the race on one set of tyres.

"The tyres are bald so you don't know how far they're going to go so there's definitely the worry of the life of the tyre," said Hamilton who started in 11th after a 10-place engine-related grid penalty.

"But also I wasn't really that fast at the end.I was struggling, had low grip.Not sure why.

"Then all of a sudden I'd have not such bad pace but I was losing performance to guys behind."

Hamilton had resisted calls to come in earlier

"In hindsight, I should either have stayed out or come in much earlier.

"When you come in with eight laps to go you don't have time to go through the graining of that medium tyre on a drying track.So I went through this sliding phase where I nearly lost almost lost more positions."

In the end, Hamilton, who was audibly angry with his team over the radio, had to use all his experience to hold off the charge of AlphaTauri's Pierre Gasly.

"Very frustrating but it is what it is.It felt good to be in third.If I can just hold onto this, it is a great result from 11th.

"This is worse but it could be (even) worse."

Mercedes team principal Toto Wolff played down the disagreement as something to "debate on the flight" home but insisted that the team orders had been correct.

"It was clear if he had stayed out he would have lost to Gasly anyway.

"The correct call would have probably been to take it very conservative and pitting when everyone pitted for the intermediates but that is in hindsight after the race.

"The relative point of view is that in the last race Red Bull was very happy only losing seven points from a grid penalty and we lost eight points today.

"So it is not the end of the world.The absolute point of view is that we could probably have scored anther three, four, five points more.