From Topps baseball cards to basketball murals, artist Efdot has focused his creativity on sports 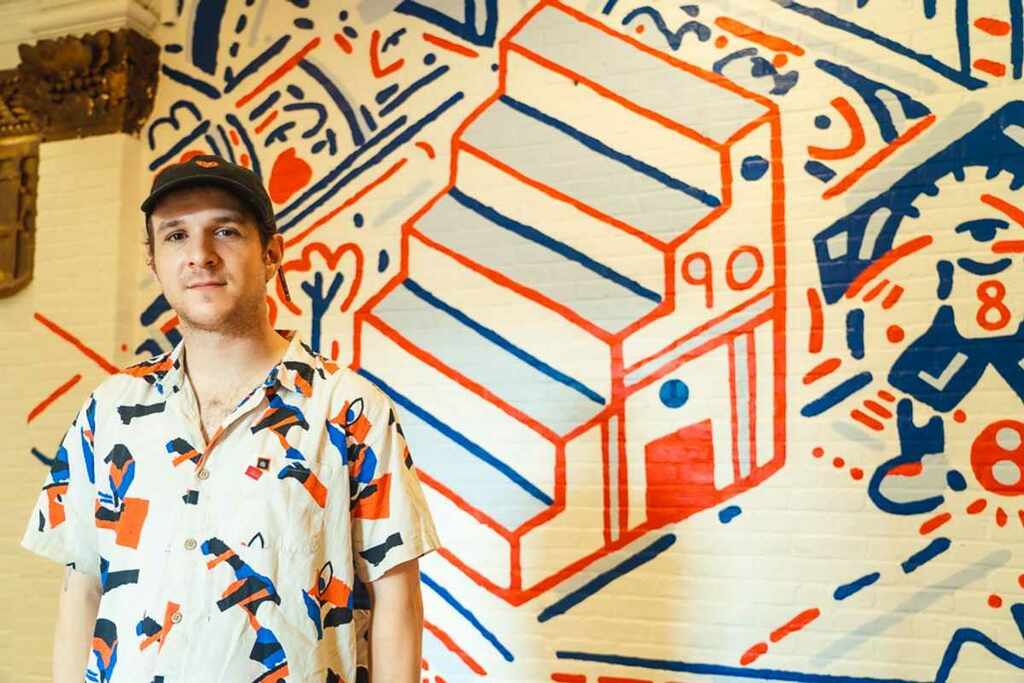 For The Win is introducing a new series featuring people whose work focuses on the more creative elements of sports. We spoke with several of the leading artists, authors and editors who are helping push sports to a more beautiful place.

NEW YORK – Eric Friedensohn didn’t even have time to get nervous. He was about to take the mound at Wrigley Field in July.

But it wasn’t going to be easy. He hadn’t thrown a baseball in a long time, and the mound feels like it’s twice as far away from home plate when you’re suddenly in front of a big crowd. It didn’t matter if he was ready. It was finally his time.

“I still don’t think I’ve fully processed it,” Friedensohn told For The Win. “I was elated. I was surprised. I had 15 minutes warning, so I was a little bit scared.”

The pitch wasn’t amazing. It landed outside the strike zone, and Clark, the official mascot of the Cubs who was waiting with a glove behind the plate, wasn’t able to catch it. For a ceremonial first pitch, though, it wasn’t as embarrassing as someone like 50 Cent or Dr. Fauci.

All things considered, it wasn’t a bad look for Friedensohn, especially since he makes his living as an abstract artist.

Friedensohn, also known as Efdot, is a visual artist and creative director based in Brooklyn who works with large-scale mural installations, fine art, screenprints and product collaborations. He has a few people employed on his team at his studio in Buschwick, which he said functions like a “mini creative agency” that he runs in tandem with his fine art practice.

He describes himself as very community-driven, and he has painted all types of murals, reaching as local as nearby small businesses and as expansive as co-working spaces around the world.

One example of his community-driven mindset includes his efforts to raise more than $60,000 for the charity Bring Change 2 Mind (BC2M) with the Cubs. Efdot was actually throwing the first pitch at Wrigley because the Cubs asked him to collaborate on a limited-edition collection for Mental Health Awareness Month. The project included a screen print and several pieces of apparel. He also appeared on Chicago outfielder Ian Happ’s podcast about mental health.

“Mixing my art with sports on that project was really interesting to me because it felt soft and tender,” explained Efdot.

When he caught up with For The Win, he was days into a project for the nonprofit New Heights NYC, which is a youth development program that aims to empower and educate underserved children. Part of its curriculum includes after-school basketball programs, and some of its notable alumni include NBA players, such as Precious Achiuwa, Moses Brown and Lance Thomas.

For this particular project, Efdot was installing a mural for New Heights NYC’s soon-to-open relocated home at the Bedford Union Armory in the Crown Heights neighborhood of Brooklyn. The center will feature multiple brand-new basketball courts, and through his energetic style that sometimes resembles a city grid, his mural shared the story of the organization’s history.

The primary theme of this mural is ascension, with staircases a common motif. He included fun nods to NYC like a metro card, a big apple and other representations of the community and the New Heights organization itself.

“This is our new home so we really wanted to work with an artist that could come in and tell the story of where we’ve started and where we’ve come to,” Ashley Faison, the chief development officer for New Heights, told For The Win. “He has done a beautiful job marrying the concepts of books and basketball, and that stands out right away.”

This piece is one of many he has done with sports as a subject matter, which is an increasingly popular trend among some artists. Efdot is one of several contemporary artists who has become known for making art about sports.

Like many, sports were a big part of Friedensohn’s life when he was growing up. He played baseball and tennis and soccer. But the Brooklyn-based artist described his participation in athletics as a love-hate relationship. At a certain point, he said, he felt like he was playing more for his parents than he was for himself.

He began to realize that when he was finding more joy in art — he was inspired by his grandmother, who made stained glass as a material — and skateboarding. Eventually, he stopped playing altogether.

“But I always loved the art of sports,” said Efdot, who said he appreciated the rich history of design, typography and color on ephemera such as uniforms, patches, pins, hats and scoreboards. “I loved the nostalgia of seeing Brooklyn Dodgers in script. It still gives me a really warm feeling when I [see] those logos.”

Even though he was no longer playing, he still held fond memories from his childhood, like when he collected baseball cards with his brother. The two of them would sell items in their collection at school during recess.

Everything came full circle for Efdot when this past year, he was selected as one of the 20 artists featured to team up with baseball card trading company Topps for its Project 2020. He felt really lucky, of course, but he knew it wasn’t going to be an easy task. He typically didn’t draw faces and hadn’t paid as much attention to baseball as he did when he was younger.

“I was pretty nervous about it,” he admitted. “But it brought me back. It forced me to go back to my childhood memories. That was such a healthy thing for me to do during the early parts of the pandemic. It was a little bit of an escape with nostalgia.”

At first, because he didn’t want to redraw the players and represent them wrong, he mostly drew around their silhouettes to create an abstract environment or background while leaving their photographs intact.

Since then, Efdot pitched his own spin-off series that he sold through Topps in which he paid tribute to 10 iconic stadiums around the league. Those subjects didn’t have to use the human form, which gave him some more creative freedom than he had with the previous endeavor.

After completing that, he now is one of more than 50 artists currently participating in Topps’ Project 70. Unlike in Project 2020, where he was assigned cards to remix, he now has more creative flexibility to design any card from within 70 years of archival material in the Topps collections.

This time around, with the increased experience under his belt, he has leaned more into illustrations. He also changed the background of his images from black to white.

Meanwhile, with the booming markets of NFTs and the somewhat surprising popularity of remixed trading cards like his own, it’s as clear as ever that people love owning things. These days, he’s thinking about his submissions to Topps more in terms of how it relates to a series in the mind of a collector.

Within his creative process, that means doing as much research as possible on his subject so that he can add layers to the piece. He doesn’t have as much space to add as many details as he would in a mural, but he was able to pay tribute to the infamous Billy Ripken card with a swear word on it by sneaking in a reference on his card for Oriole Park at Camden Yards.

Of course, Efdot acknowledged that there is only a small subset of people who like both sports and art, let alone his specific style of art.

But once those people found him, he was able to cultivate a collector base and reward them in unique ways. One idea he executed was to sell companion cards — featuring his own intellectual property with his original abstract figurative Blob character — that he printed himself in Queens.

The Blob character shows up again on his mural in Crown Heights, this time while wearing a basketball uniform sporting the No. 8 on the front. Like in much of his work, which is both playful and accessible, the figure evokes fluidity and motion in an otherwise static image.

“I could be myself, fully, but also express it through sports,” explained Efdot. “I love finding avenues to flex my own creative muscles of what I’m doing outside of sports while still meshing it with sports.”

He aims to take the essence of his subject and boil it down to one icon, almost like a logo in sports. Over time, he hopes that people begin to associate his creations with certain feelings in their own life.

As he continues to hone his style, in all of his practice, Efdot looks to create images simple enough so they can be easily digestible and recognizable while still remaining unique and full of personality.

For example, when he collaborated with Topps, his intentions were to move away from the uber- sleek digital photography of contemporary baseball cards and more toward the illustrated look that was found on the back of baseball cards in the 1950s.

One recent example of that was his card for Satchel Paige. Artistically, this is one of his most successful pieces to date because it captures the recognizable motion that is found within both Paige’s pitching windup (where his arm is whipping upon release) and marries that to the visual language of Efdot’s iconic, wavy style.

“It’s almost a wink in each design,” explained Efdot. “For me, finding that balance has been fun.”

Of course, working with Topps has also attracted a new group of sports fans to his art. For some, his style hasn’t resonated, and he said he had to build up a thicker skin to the criticism.

However, he said the overwhelming majority are supportive and understand what he is doing and understand the vision. People have questions about the art, and they want to know what is happening next. In fact, he’s even seen some folks who bought his baseball cards go on to buy one of his original pieces, like a line drawing of the city or of one of his characters in nature.

“The passion from the audience is bigger than anything I’ve ever experienced before,” said Efdot. “One of my favorite things is seeing these baseball card collectors become art collectors.”