From ribbons to medals, and tears to spears 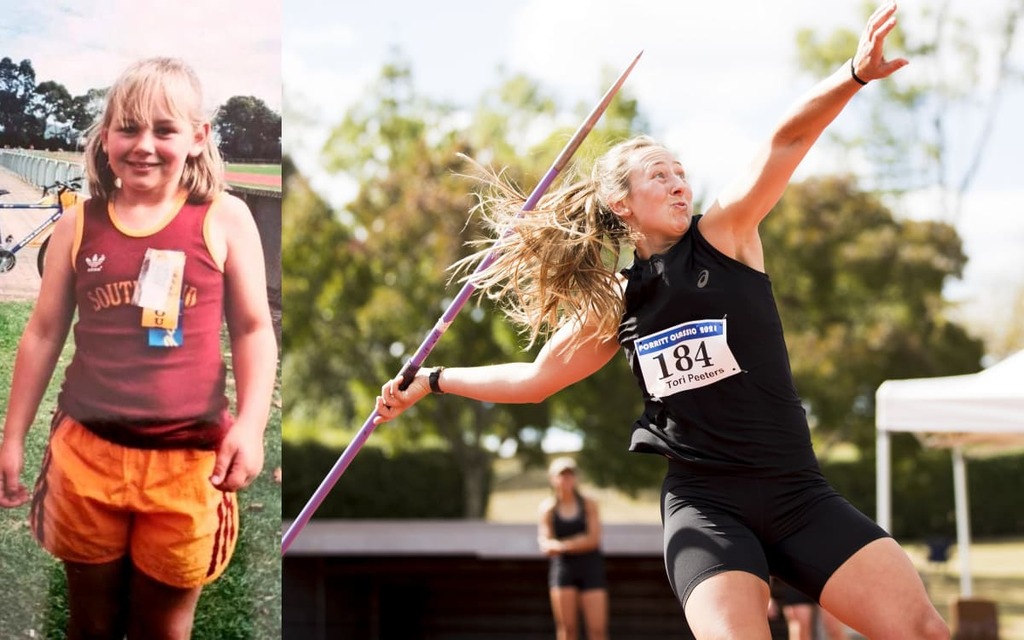 As a nationwide campaign encourages our tamariki to give running, jumping and throwing a go, Suzanne McFadden talks to three track and field stars about their first athletics club memories.

Tori Peeters vividly recalls the tears. Floods of them.

It was a club night at the Waharoa Athletics Club in the Waikato, and Peeters was five or six.

The little blonde, tanned kid in the baggy yellow singlet had been winning every event she entered since she’d started at the age of four.

“I won everything because I was the only one in my age group,” New Zealand's No.1 javelin thrower says. “There were about 20 kids in the club – two of them were my brother and sister. I just remember being absolutely rapt because it was all sunshine and rainbows.

“Then one week they put me in a race with the older kids. Of course, I didn’t win, so it was full-on tears. Mum and Dad had to remind me who I was racing against.”

It didn’t discourage her; she was driven. When her family moved to Southland, the seven-year-old Peeters joined the local Gore Athletics Club and tried her hand at every event she could.

“I have a clear file with all my certificates; the distance I did in long jump was pretty far for a little kid,” Peeters laughs. “But I had absolutely no idea about javelin. I didn’t see older kids throwing them around.”

It was in PE class at St Peter's College in Gore where she went into the little gear shed and pulled out the spear. “I threw it like a ball,” she says. “But at school athletics day, I was one of the only ones who could get it into the ground.”

Her motivation to improve was her older sister, Stacey, who’d also given javelin a go (she’d go on to play professional netball in Wales).

“We were competitive siblings, and throwing further than Stacey gave me more of a reason to throw well,” Peeters says.

She broke all the school records, which grabbed the attention of local club coach Murray Speden.

“We’d go to the corner of the little grass athletic track in Gore, sheltered by the wind. I’d put on my rugby boots and throw,” Peeters says.

“I this day I still give Murray Speden a phone call and catch up with him when I’m down in Gore, and we debrief the season together. I still have such strong bonds with the people who helped me at club level.”

Now a member of the Hamilton Hawks club, Peeters narrowly missed out on selection for the Tokyo Olympics, but has a fresh view on the next three years.

After this summer’s domestic season, she has an action-packed agenda, starting with the 2022 world athletics championships in Oregon in mid-July and the Commonwealth Games in Birmingham two weeks later. The 2024 Paris Olympics are in the frame, too. “My coach [Debbie Strange] and I are making a plan to compete in Europe,” she says. “We know I’m worthy of being there, and we’re not letting the selection of a team determine what we do.”

Double Paralympics sprint medallist Danielle Aitchison simply did whatever her siblings did.

Growing up on a dairy farm in Patetonga on the Hauraki Plains, Aitchison followed her four brothers and sisters from sport to sport. They all joined the Te Aroha Athletics Club when she was 12 (she's the second eldest).

“When one of us wanted to play a sport, we all did. My older sister had a lot of the choice – so I also did ballet, tennis, hockey and netball, and sports in school like cross country and rugby,” the now 20-year-old says.

Born with cerebral palsy and almost complete hearing loss, Aitchison admits she initially found it tough competing with able-bodied kids. She loved running, but she was slower and sometimes teased for it.

But a born fighter, she stuck with it.

“Getting to hang out with my siblings made it fun,” she says. “I enjoyed the ribbon days, which weren’t based on your age but how you performed, so I was put in events with athletes with the similar times. It actually felt like a race.

“I still have all the ribbons; I’ve stitched them together to make a blanket.”

Aitchison drifted away from sport in high school, until 2017, when she saw an ad for the Halberg Disability Games.

Although she ran in socks against athletes wearing spikes, her talent shone through and she was spotted by track coaches. Two months later, she won three medals at the national secondary school champs.

“I didn’t even know there was athletics for disabled kids. I found my people there,” she says.

Aitchison, who won silver in the 200m T36 and bronze in the 100m at the Tokyo Paralympics, is happy to see the Para-athletics movement growing at the grassroots.

“When I was doing athletics as a kid, I didn’t see any other disabled kids. When I was competing at high school, there was me and two other girls. At nationals, there were eight girls max. But we’re slowly getting more people, which is great.”

She now belongs to the Hamilton Hawks club, but after years of training towards the Tokyo Paralympics, Aitchison is taking a well-earned rest from competing. She’s wrapping up her semester at Waikato University, where she’s studying social science, and hoping to see more of the country when Covid levels allow.

The Olympic hammer thrower has been a member of the South Canterbury Athletics Club (formed in 1871), since she was eight.

“The sport, and the club, have been in my life ever since,” the 24-year-old says.

“Every year I go to re-register, and I think: ‘Do I stay with the same club in Timaru now I’m living in Christchurch?' But there’s always a part of me that feels like, well that’s where I started, so I should.”

Bruce, who made her Olympic hammer debut in Tokyo, was a gymnast first and foremost until stress fractures in her spine forced her to retire at 14. But athletics always filled her summers.

“Mum tells me I came home from school one day after doing athletics and I said ‘I want to give this a go, and do it more often’,” Bruce remembers. “There was a group of 14 eight-year-old girls in the club, which was pretty big. But I’m the only one still going.”

“We were encouraged to do all the events. Looking back, I see that was a really good thing. Today you see kids who only want to do throws because that’s what they’re good at. And I’m like ‘You’re nine, you don’t know what you’re good at yet’,” she says.

“I wasn’t great at throwing, but I wanted to be.” She was driven to beat a girl who always threw the shot further.

Bruce followed a friend to her first coach, Ian Baird, another advocate for kids to do all the events. He encouraged her to try the hammer, after she saw an older girl throw 54m. "I was relatively good at it, and I got hooked,” she says.

The posture, co-ordination and timing Bruce honed through her gymnastics career helped shape the athlete she’s become. She started throwing the hammer right-handed – that’s the hand she throws a discus and writes with. “But I asked if I could throw left-handed, because that’s clockwise, and the same way I was doing all my turns and spins in gymnastics. It felt more comfortable,” she says.

Saturday club days led to training every day after school; the Colgate Games led to national championships and a bronze medal in hammer at the Australian Youth Olympics in 2013. “I spent a lot of time up at that track in Timaru,” she says, the same track that's home to Olympic shot put bronze medallist Tom Walsh.

Bruce moved to Christchurch to further her athletics career and came under the wing of national throws coach Dale Stevenson. She’s now a coach too, working with kids at the Selwyn Athletic Club in Rolleston.

“I was a little bit unsure if I wanted to do it, I’d just stopped coaching gymnastics,” she says. “But I’m glad I said yes. I’ve worked out there for four years now.

“I went out the other day and it was refreshing to work with these kids, where everything is new. Especially when the younger ones see hammer and say: ‘I want to try that too’.”

Bruce is back training, too, for her own summer season, the national champs in March and then heading offshore to prepare for the world champs and Commonwealth Games, for which she’s already thrown the qualifying distance.

* Athletics for Every Body is a nationwide campaign running during October and November to encourage Kiwi kids to give running, jumping or throwing a go. Athletics is a sport which embraces everyone, regardless of ability, size or shape.

You can find more information on how to find your local athletics club here; find out more about the campaign here