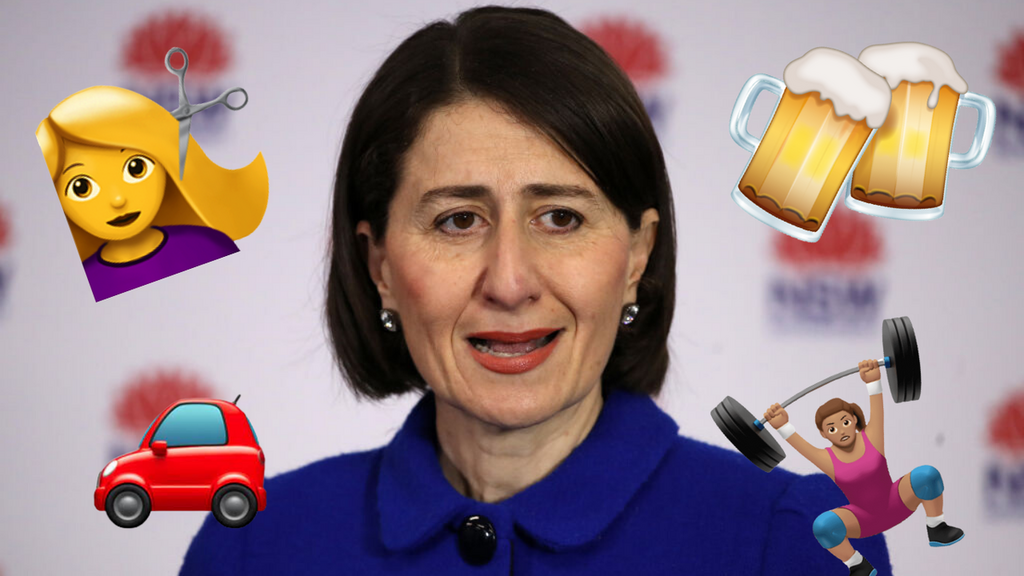 NSW Premier Gladys Berejiklian has unveiled the state’s path out of lockdown once we hit 70% double-dose coverage, and it mentions gatherings, the pub, and yes, even haircuts.

The plan was announced at the daily coronavirus press conference on Thursday, where it was also announced that 1,405 new cases and six deaths were recorded overnight.

The new freedoms will apply to adults who are fully vaccinated, as well as children and people with medical exemptions. There’s your incentive to get your two doses of the good stuff.

“So you have been warned,” Berejiklian said.

“If you’re not vaccinated, come forward and get the vaccine, otherwise you won’t be able to participate in the many freedoms that people have at 70% vaccination.”

Despite reports about a fixed “freedom day”, the Premier stressed that there isn’t a set date for these freedoms to be rolled out, and instead clarified that once the entire state hits 70% rates, the changes will come into effect the following Monday. Fingers crossed we don’t hit 70% on a Tuesday…

Given the current rate of vaccinations in NSW, we can expect to have these freedoms back in mid-to-late October.

“I want to stress that whilst today the NSW Government is outlining our road map for the way forward in NSW, we are definitely not out of the woods,” Berejiklian added.

“We know that case numbers are likely to peak in the next week or so and we also know that our hospital system will be under the greatest stress in October.

“However, we also know that living with COVID means you have a cautious and staged reopening, once you get to the high rates of vaccination in your adult population.”

Here’s what’s in store for us next month.

You’ll be allowed to have have up to five visitors over, provided they’re all fully-vaxxed if they’re adults.

While that’s not huge, it’s still better than nothing, hey.

As for outdoor gatherings, up to 20 fully-vaxxed adults will be allowed to hang out together.

Get ready to hit your local because pubs are set to open back up again.

All the shops that are closed right now will be able to reopen under the one person per 4 square metres rule.

However, people who aren’t fully vaccinated will only be allowed into critical retail premises – in other words, supermarkets and other shops selling essential goods.

“If you want to go and buy something which is regarded as a non-essential shop, you will have to scan the QR code and if it is not showing a green light saying you have been vaccinated, you won’t be welcome inside,” Berejiklian said.

The NSW government reckons domestic travel will be allowed when the state his 70% double-dose coverage.

That might be wishful thinking, given how keen other states are to keep their borders shut at the moment.

“I don’t expect other states to open their borders to us at that time – far from it – because other states will be catching up to get their vaccination rates at 70% double dose,” Berejiklian said.

“I have every confidence that by the time New South Wales gets to 80% double dose – and I don’t think too many states will be too far behind – that we will then, at that stage, not have any internal borders in Australia and our eye will be towards international travel as well.”

However, at least people will be able to travel freely within NSW. If you’re in Sydney, for example, a weekend down the coast will soon be possible.

Also worth noting: campgrounds and caravan parks will be allowed to reopen.

Gyms can finally reopen under the one person per 4 square metres rule. Classes will be capped at 20 people.

Other indoor and outdoor sporting facilities will also be able to reopen, which means we will be able to hit the pool in time for summer.

We’ll also finally be able to get haircuts again, with hairdressers allowed to have up to five clients at a time in addition to the one person per 4 square metres rule. The same applies to nail salons and similar venues.

Masks will remain mandatory for everyone over the age of 12 in all public, indoor venues like shops.

You’ll also have to wear a mask on public transport.

The good news is that you won’t have to wear a mask outdoors (except for hospo staff on the job).

Big events are back, baby.

Major outdoor facilities like stadiums, racecourses, theme parks and zoos will be able to reopen under the one person per 4 square metres rule, with a cap of 5,000 people.

Other outdoor events will be allowed to have up to 500 people, so long as everyone’s seated.

As for indoor venues like theatres, cinemas, museums and galleries, the one person per four square metres rule will still apply with a cap of just 75 people. Everyone will have to be seated.

Weddings, funerals and places of worship

A total of 50 people will be allowed at weddings and funerals, and people will have to remain seated while eating and drinking.

Places of worship like churches, mosques and temples will be able to reopen under the one person per 4 square metres rule. However, singing will still be banned.

The future of lockdowns

Just because we’re slowly opening up, it doesn’t mean that we won’t have snap, localised lockdowns in future if and when new outbreaks crop up.

“If there’s a rural town that suddenly has an outbreak of cases, we will say to people, ‘Don’t go to that town’,” Berejiklian said.

“And everybody in that town shouldn’t leave their town, but they can do what they’re allowed to do with 70% double-dose in that town.

Now go forth, and get vaxxed.

As NSW Chief Health Officer Dr Kerry Chant said at the end of the announcement: “This is all in everyone’s hands.”