From Britney Spears, to BTS and Beyonce: Relive iconic performances of the MTV VMAs 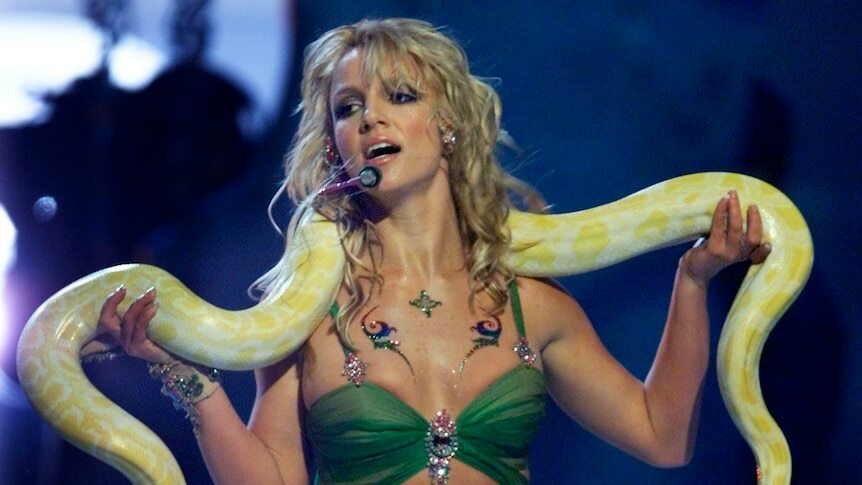 The VMAs are back — a celebration of the most entertaining and creative music videos during the past year.

For a select few artists, it's also a chance to showcase live the talent and tunes that brought them to the top of the pile.

Lorde may have pulled out, but expect to see the likes of Lil Nas X, Olivia Rodrigo, Kacey Musgraves, Machine Gun Kelly, Justin Bieber and more.

And what better way to prepare than with a dive into the iconic performances of years past.

Britney Spears's 2001 performance of I'm a Slave 4 U came at the height of her early career. She'd had multiple successes on the charts, toured, performed at the Super Bowl and was one half of a pop music power couple.

While the performance itself is considered one of the most iconic, it didn't pass without controversy.

Spears's use of live animals — including a rotating cage with a big cat and handler (Doc Antle of Tiger King fame), and the yellow python across her shoulders — attracted criticism from animal welfare groups.

PETA even sent Spears a letter ahead of the show, asking she remove them.

Madonna's first MTV VMAs performance — Like a Virgin — saw the singer overcome a brief wardrobe malfunction when she lost a shoe.

But for memorable, this one from 2003 takes the biscuit:

Madonna's performance alongside Christina Aguilera and Britney Spears ended with a passionate kiss, becoming the single most-talked-about VMAs moment of all time.

Seriously. Google 'VMAs performances' and most results are likely this kiss, or reactions to it.

This is one of those performances that hits you right in the feels, whether or not you're a fan of the artists.

In 1997, Sting joined P.Diddy as part of a tribute performance to the late Notorious B.I.G., who had been killed earlier that year.

The song, I'll Be Missing You, samples The Police's track Every Breath You Take.

In addition to Puff Daddy and Sting, the tribute featured a gospel choir, R&B group 112, and Faith Evans, former wife of Biggie Smalls.

First question: which one? Beyonce has performed at the VMAs six times.

We've witnessed the early days of her solo career, a Blue Ivy baby reveal — she was even honoured with the Video Vanguard award.

But if we're talking about a performance that had it all, you can't go past the Lemonade medley.

This show — and it was a show — had everything: emotion, killer tunes, and the type of dance moves that just feel physically impossible to even attempt.

The 16-minute masterpiece also referenced the Black Lives Matter movement. One for the ages.

BTS make US awards show debut in a pandemic

K-Pop royalty BTS had already taken home two awards the year before, but 2020 was the first time the group performed at the ceremony.

It was also their first live performance of the record-breaking track, Dynamite.

The pandemic brought unusual circumstances for all, with performers finding unique COVID-safe productions.

While BTS beamed in from South Korea, a high-tech green screen stage transported them through a series of NYC scenes.

There were sharp fashion looks, a catchy disco-esque tune — and the precise choreography the 'Bangtan Boys' are known for.

We all go through periods of growth and trying out new things — some of us just happen to be incredibly famous musicians and it happens in the public eye.

This 2013 performance with Robin Thicke left many viewers scratching their heads.

She later told Alan Carr she felt like the performance was in the spirit of the awards.

"I felt like that's the one night you can go for it."

However, reflecting on it more recently in 2017, she told Harper's Bazaar magazine she felt "sexualised" by the situation.

Millennial dreams came true in 2013, when NSYNC reunited on stage for a few minutes of peak nostalgia.

The group, which had been on hiatus since 2002, appeared as part of Justin Timberlake's set — performing a medley of classics including Girlfriend and Bye Bye Bye.

Timberlake would go on to be handed that year's Video Vanguard Award.

It may have been a few years, but Justin, J.C. Chasez, Lance Bass, Chris Kirkpatrick and Joey Fatone still had the moves... and the crowd singing along with them.

Who could forget this?

While not technically a performance in the musical sense, this moment from the 2011 awards remains one of the most talked about and quoted, to this day.

While giving her acceptance speech for Best Video by a Female Artist, Taylor Swift was interrupted on stage by Kanye West.

Later in the evening, Taylor was invited back onto the stage by Beyonce, to finish her original speech. Sportsmanship!

The MTV Video Music Awards air on Foxtel from 10am AEST Monday September 13.