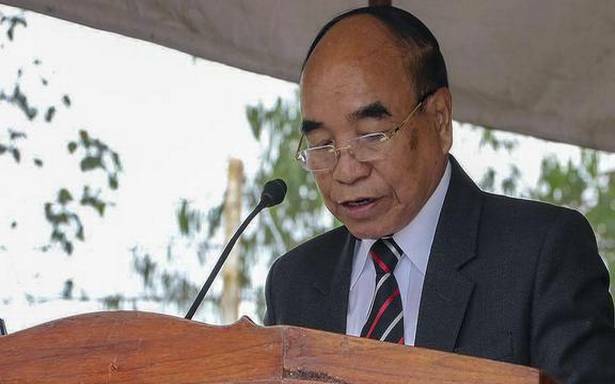 In a fresh influx from trouble-torn Myanmar, more than 1,800 people have reportedly crossed over to Mizoram in the past few days, Home Minister Lalchamliana said on Tuesday.

The Minister also clarified that he was yet to access documents pertaining to the matter. Myanmar nationals have been fleeing the country since February following a military coup that left its democratically elected government in exile and sparked protests and subsequent crackdowns.

Mr. Lalchamliana stated that the Myanamarese who have entered Mizoram are mostly from the neighbouring country’s Chin state.

“I have learned that around 1,850 people from Myanmar entered the border districts of Champhai, Hnahthial and Lawngtlai in Mizoram in the past few days. I am yet to receive any official record as I am undergoing quarantine after having come in contact with my COVID-affected grandchildren,” he told PTI.

He further said that the Centre has not responded to the State government’s letters seeking asylum for the Myanmar nationals in the country.

“The Central government did not make any arrangement yet to provide asylum and relief to the Myanmar nationals, who fled their country fearing for their lives. It is also no longer asking Mizoram to send the refugees back as it did earlier,” the Home Minister pointed out.

Mr. Lalchamliana had informed the State Assembly last week that the State government has already released ₹30 lakh to assist the refugees on humanitarian grounds.

Earlier in March, Chief Minister Zoramthanga had written to Prime Minister Narendra Modi requesting him to provide asylum and assistance to the Myanmar nationals.

A delegation from the State, led by lone Lok Sabha member C. Lalrosanga, had also visited Delhi in mid-March and discussed the matter with Union Ministers.

Official sources said villagers residing along the India-Myanmar border have raised funds and set up relief camps for the refugees who have made their way to the State. The residents have also provided them food and other aid, they said.

P. C. Lalremkunga, village council president of Thingsai in Hnahthila district, said locals have erected temporary camps for over 400 than Myanmar nationals who entered the State.

“Altogether 417 people, including children and elderly, entered the village in the past four days after Chinland Defence Force (CDF) apparently attacked and seized a military camp at Myanmar’s Lungler village on September 10 and 12,” he stated.

According to Lalremkunga, Thingsai currently houses over 700 Myanmar nationals, 200 of them camping near Tiau river along the India-Myanmar border.

Members of a women’s organisation in the village have collected utensils, clothes and mattresses to aid the refugees, he added. Similar reports arrived from villages in Champhai district.

Members of the Young Mizo Association (YMA) said at least 449 more people from Myanmar have taken shelter in Tuipuiral area of Champhai district in the past one week.

Police records show that as many as 11,035 Myanmar nationals are currently residing in the State. A senior police officer, however, said that the number keeps changing amid fresh influx and outflow along the porous international border.