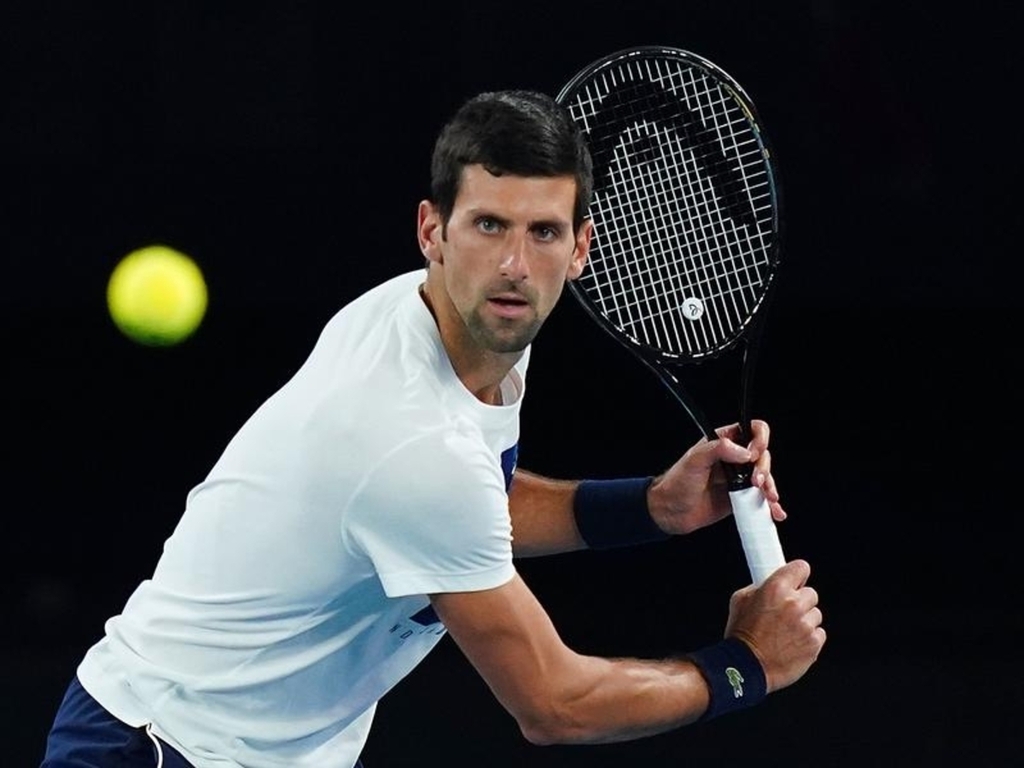 Within hours of being released from immigration detention on Monday evening, Novak Djokovic headed for Rod Laver Arena to have a practice session in preparation for his planned Australian Open title defence.

The Serb was granted late night access to the court to loosen his limbs and reacquaint himself with his tennis racquets after spending almost a week under guard at the Park Hotel in the inner Melbourne suburb of Carlton, and the day at his lawyers' chambers listening to the court case.

The judge said the world No.1 was given insufficient time to speak to Tennis Australia officials and to lawyers to respond to being told of the intent to cancel his visa.

Tweeting a photograph of himself and his team on Melbourne Park's main court Djokovic wrote: "I'm pleased and grateful that the Judge overturned my visa cancellation. Despite all that has happened, I want to stay and try to compete @AustralianOpen. I remain focused on that. I flew here to play at one of the most important events we have in front of the amazing fans.

"For now I cannot say more but THANK YOU all for standing with me through all this and encouraging me to stay strong."

The text was followed by several prayer emojis.

Rafael Nadal, who is tied with Djokovic and Roger Federer on a record 20 grand slam titles, called the controversy "a circus" and said he supported the decision to allow his great rival to play in the Open.

"Whether or not I agree with Djokovic on some things, justice has spoken and has said that he has the right to participate in the Australian Open and I think it is the fairest decision to do so, if it has been resolved that way. I wish him the best of luck," Nadal told Spanish radio Onda Cero.

However, nine-time Open champion Djokovic is still not certain of competing.

A spokesman for Immigration Minister Alex Hawke said he was considering whether there are still grounds to cancel the tennis star's visa.

Soon after Djokovic finished his practice in Melbourne his family gave a press conference in Serbia during which his mother, according to the BBC translator, said her son "was subjected to torture, to harassment. We will hear even more about what he has gone through".

Dijana Djokovic also said: "This is his biggest win in his career, it is bigger than any grand slams."

His father Srdan added: "They took away all his rights his rights, as a human being."

Brother Djordje Djokovic said: "He went to Australia to play tennis, to try and win the Open and win the record he has been chasing for so many years."

"We love Australia, Novak loves Australia, he's won it so many times, we will keep on coming back".

Former Wimbledon champion Marion Bartoli told the BBC she thought Djokovic would be physically ready to compete at the Australian Open, which starts on 17 January, but he may be mentally drained after the events of the past few days.

"I think he can work his way through the first week and build his momentum towards the second week, it's more how mentally and psychologically he will be affected by all of this," she said.