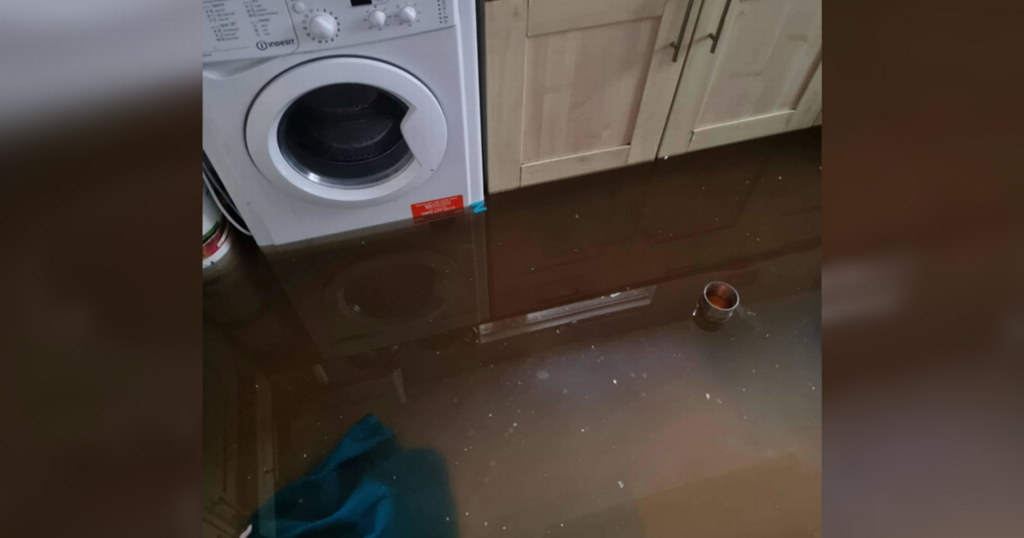 A woman rushed to save her one-year-old twins as rising 'brown water' flooded her Wirral home.

The woman, who wants to remain anonymous, was playing with her four children while dinner cooked when she noticed water flowing into her neighbour's house on Thursday afternoon.

She told the ECHO: "Within 10 minutes, it was coming into my kitchen and then the front door. We were trying to get a load of blankets and towels to make it as safe as possible."

Have you been badly affected by the flash floods? Let us know in the comments below or get in touch at news@liverpool.com

This was one of many houses affected by flooding on the Wirral that delayed trains, closed schools and stranded cars yesterday, September 9.

As two feet of water filled her Birkenhead home, she rushed to save her children from the brown liquid.

The 27-year-old said: "The babies can't sit right now. Because they've got cerebral palsy, I have to juggle them. I have four kids and I had to get them away.

"The water was brown, and I wasn't sure if it was sewage water. I just wanted to get them away from it as fast as I could."

The mum said she was unable to sleep last night due to worrying that damaged appliances could spark a fire but fortunately, her children's dad and grandad arrived last night to help deal with the flooding.

The mum of four said: "I was frantic. I was just crazy and trying to fix things, trying to get things out of the way, trying to save things.

"Today I'm more depressed. I don't know what's going to happen or how to fix things."

She woke this morning to a 'disgusting' stench filling her home.

The 27-year-old told the ECHO: "I woke up and the smell was dirty. It smells bad. It doesn't smell good at all. I like a nice-scented house, and it's gone. It's gone upstairs and it's a wet dog smell as well."

Despite the tragic flooding the mum said it has brought her and her neighbours closer together as they rushed to her aid.

She said: "I don't usually speak to anybody here. I'm a loner. I like to keep to myself. Next door took my kids in for a little while. I was a bit frantic, so they took my kids just to keep them happy.

The mum said she is now beginning the clean up of her home but is a bit daunted as where to start.

She told the ECHO: "I need to clean it. I just don't know where to begin. I have no idea. I just want to leave the house. I don't want to be in here. I just want to get out and get some fresh air."