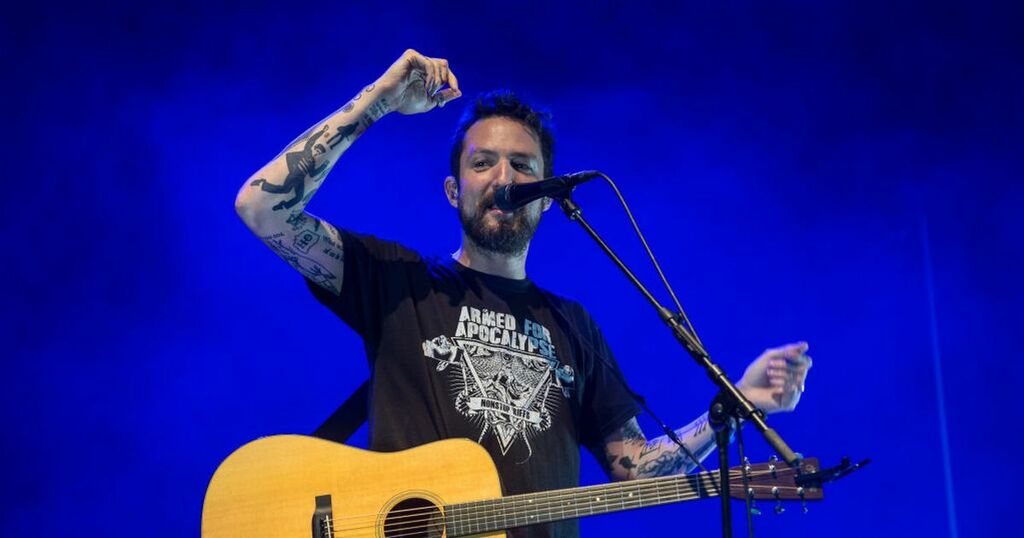 It’s been over three years since Scott Hutchison took his own life.

Just months after the Frightened Rabbit frontman passed, close friend and fellow performer Frank Turner says he visited him in a 'lucid' dream.

Holding a guitar, Scott played a few chords and a melody that would eventually be used in a song about him in his final moments.

Frank, who is admittedly an atheist that doesn't believe in ghosts, recalls waking up after the dream and recording what he'd heard from memory into a voice note before falling back asleep.

What came to him that night has now become 'A Wave Across A Bay', a visceral and moving song about Scott's death. Despite the evident pain, the song finds Frank coming to terms with Scott’s decision with understanding and acceptance.

The musicians met back in 2010 when they were touring with their bands and landing slots at similar festivals. They would meet up when schedules allowed, but for the most part, their relationship consisted of a lot of late-night phone calls.

“I came across their music because an American friend of mine who I was on tour with said ‘you’re from Britain so you must be a Frightened Rabbit fan' and I said 'who?' And they gave me a copy of Midnight Organ Fight and I became obsessed with it and still am.

“Shortly after that, I found myself on the American festival circuit at the same time and the same level as Frightened Rabbit so I started finding their dressing room and parking myself in there and trying to force my friendship onto them. I think at the beginning they didn’t have any idea of who I was but Scott and I became mutual appreciators of each other's music. I was like 'I love you' and he was like 'thanks'.”

The pair found each other at similar points in their careers with both bands moving from independent to major labels at the time and following similar trajectories. Their ability to compare notes and share experiences became the foundation of their friendship.

“There aren't that many people to talk to about it and it was very nice to have that.

“The main thing about Scott for me, and this is true for many people who have issues with their mental health, is that immediately in person he was fun, he was warm and kind and generous and he gave great hugs. Great big bear hugs.

“It was always a laugh hanging out with Scott, in a really lovely way. In a way that if your only interaction with him was through his music you’d find quite surprising.”

The lyrics to 'A Wave Across The Bay' are jarring and not only on first listen. They’re so jarring that Scott’s brother and Frightened Rabbit drummer Grant couldn’t listen to them. He still gave his blessing for the song to be released for the reason that Scott ‘dealt in emotionally heavy music’.

While the circumstances of his death have never been hidden, the thought of how Scott's last minutes on earth were spent is something most people will push to the back of their minds.

But upon listening to the song, it's impossible not to imagine him and what he must've been feeling on what Frank describes as his 'final mile'.

“There must have been a moment just before you hit the water/ When you were filled with a sense of peace and understanding/ With the wind in your hair and the light in your eyes/ As you realized you were finally escaping”, he writes.

“I felt like it was my duty not to change it too much after what initially had come to me.

“Part of that is that some of the lyrics to the song are very vivid and visceral and quite full-on.

"It’s still an extremely complex set of feelings because on the one hand I am utterly gutted about what happened and I’m so sad and wish it had never happened.

"But at the same time, I think it's important to note that Scott didn't make a mistake, I think he was extremely aware of what he was doing. There is one level at which I respect my friend's right to make that choice. That's a loaded thing to say but it's true. In thinking that way, there is a form of peace.

“Hopefully the song is mostly a celebration of him. He was a glorious shining light in my life. Part of the reason why I've been using Frightened Rabbit as walk-in music for all of my shows over the last few years is that I don't want him to be an ever-fading, receding memory. I want him to be a vivid presence in my life and other people's lives.”

Also touched on in the song is their final conversation. Frank had spoken to Scott just weeks before he passed and he seemed to be in a 'really great place'.

“It was a lovely conversation. Scott had just done a Mastersystem record which I think is a masterpiece.

“He was touring it and I was on tour at the same time. I was trying to figure out if I could coordinate one of my tour days off with one of the Mastersystem shows. Turned out that wouldn’t work so we were talking about that.

“He sounded to me like he was in a really great place. A lot of people who were in touch with him at the time say that he seemed to be in a better place than usual not long before the end of his life. Obviously, the ravages of mental illness are difficult to predict and you can never really know what someone is thinking, but it makes what happened harder to deal with.

“It was just really, really sad."

The last time Frank and Scott saw each other was at a festival in Portsmouth. They drank beer in the sun and enjoyed one of the rare occasions they actually got to hang out in person.

The songwriter's favourite memory of their friendship was in Los Angeles where a stroke of luck saw them reunited.

"He moved to LA for a short time. I didn’t know he had moved and I was in LA and I’d just finished a show and was having an after-party in a tattoo parlour that was very drunken and involved lots of bad tattoos", Frank explains.

"A friend mentioned that Scott was in town and I said 'what are you talking about?' And he said 'he’s moved here' so I dropped him a text, he called me back immediately and I was like 'where are you?' and he said 'LA, where are you?' and I said 'LA!'. So I hung up and dropped him the address and eighteen minutes later he screeched up in a taxi, ran into the party, and grabbed a bottle of whisky.

A Wave Across The Bay has been released ahead of Frank's new album '‘FTHC’' and is available to order on 7” vinyl with money for the sale being donated to Tiny Changes. The single features Frank’s cover of the Frightened Rabbit fan favourite ‘Modern Leper’ on the b-side, which was recorded with Scott during an Xtra Mile / OB1 session in May 2017.

'A Wave Across The Bay' is also available to stream now.

If you’ve been affected by any of the issues covered in this story or you’re in need of help, please contact the Samaritans in Glasgow. You can call free from any phone on 116 123 or head to the Samaritans website for more information.