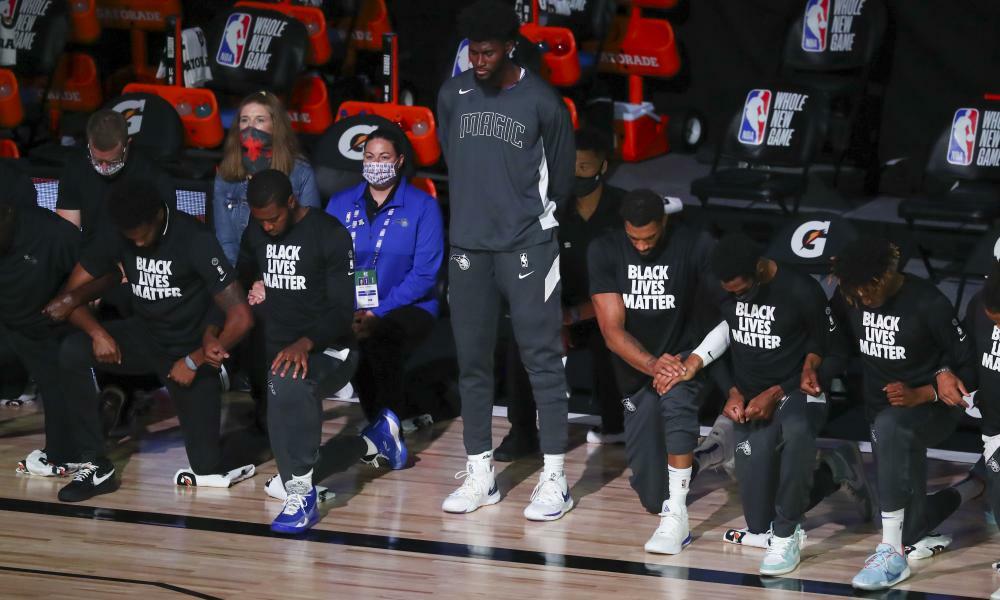 Let me first say that I have a tremendous amount of respect for you, and not just because, as a former NBA player myself, I appreciate the hard work and skill it takes to succeed in the league.

My admiration for you extends off the court too. I’ve watched videos of you preaching and, as a fellow Christian, I was blown away. You are eloquent, your delivery is exquisite, you appear humble, knowledgeable, and I can see your passion and sincerity. To be so young and walking in your purpose is commendable.

You also possess courage to stand up for your convictions. Although I completely disagree with your perception, I respect that you had the fortitude to take the unpopular stance and oppose your peers. That came about when you decided not to wear a Black Lives Matter shirt alongside your Orlando Magic teammates, who took a knee during the national anthem following the police killings of George Floyd and Breonna Taylor. You said you have a different interpretation of what the message meant.

Given that my book We Matter explored the subject of athletes and activism, I was invited on to numerous shows in order to criticize your choice, but I always declined. It would be hypocritical of me to encourage players to stand up for what they believe in and then bash them for doing so when their opinions happen to differ from mine. I can disagree with you without attempting to discredit or silence you, but that’s not what most networks are interested in.

Which brings me to the current topic of the Covid-19 vaccine and NBA players. There is already considerable misrepresentation on the topic before we even discuss your specific case. There has been widespread condemnation over the league’s record on vaccinations because of a few high-profile holdouts such as yourself, Kyrie Irving, Bradley Beal and Michael Porter Jr. There has even been ridicule of LeBron (who has been vaccinated) but is unwilling to chastise players who have not.

Meanwhile, vaccination rates among the majority of police departments across the country remain relatively low. The New York and Los Angeles Police Departments, who have many, many more interactions with the public than NBA players are far lower. As of last Wednesday, the NYPD’s vaccination rate was 68% and the LAPD’s was 65%. And yet, based on the media outrage, you would believe that two dozen or so unvaccinated NBA players are a bigger danger to America than the thousands of police officers who encounter the public on a day to day basis, often maskless, and have yet to get the shot. It is hypocritical to hold athletes to a higher standard than we do law enforcement. But this is the age we are living in.

Currently, I see you being misrepresented by some in the media and I agree with you when you said that “true journalism is dying”. An article in Rolling Stone implied you turned against vaccines after “watching Donald Trump’s press conferences” something that you have said is untrue. Mischaracterizing athletes for the sole purpose of using that fabrication to then discredit them is a tactic parts of the media use far too often.

You – and some other vaccine hesitant players – have clearly stated that you are not against vaccinations. More importantly you have not discouraged others to get them. Instead, you’ve articulated that you are personally “uncomfortable with getting the vaccine at this time”. While we hold different opinions on the vaccine, I’m not going to demean, ridicule or purposely misrepresent you because of them. If I did that, I would be as bad as the hypocritical right-wing media, Donald Trump and his followers who purposely misrepresented Colin Kaepernick’s reasons for taking a knee during the national anthem (for the record, I’m not comparing you to Colin Kaepernick, but the misrepresentation of your stance does seem to have a striking similarity.)

The same people who once told all athletes to “shut up and dribble” are now praising you for expressing your hesitancy in taking the vaccine, and are attempting to co-opt your uncertainty to promote their agenda – a push against vaccine mandates – which was the sole reason Fox News invited you to appear.

Getting the support of Fox News, Trump supporters and Texas senator Ted Cruz of all people should ring alarm bells. Cruz has castigated NBA players for his entire career for speaking out, but he now tweets that “he stands” with players like yourself who are unvaccinated. He even called LeBron “courageous” for saying vaccination is a personal choice, which is laughable given Cruz’s history of antagonism with him. Cruz clearly believes LeBron is only “courageous” when he agrees with him. That’s the epitome of hypocrisy.

And just as Cruz now embraces LeBron, and Donald Trump Jr praises Kyrie, the same crowd who shouted from the mountaintops that athletes should “stick to sports” are now wrapping their arms around you and holding you up as one of the “good ones”.

They would love to make you into the next Herschel Walker, someone who repeats the Fox News talking points and gets invited to speak at the Republican National Convention. Or reward you like a Jason Whitlock, Sage Steele or Stacey Dash, with pats on the head in return for being the Black face who agrees with them. Someone they can point at to prove they are not racist.

And make no mistake: they will compliment you on how well you speak, and proclaim what a great example you are for your community. But as soon as you stray from their script, you will be cast away quicker than Donald Trump discarded Omarosa.

I’m not telling you what to believe. I don’t feel you’re “uneducated”. The purpose of this letter is to warn you to be very leery of those who are currently applauding you. Pay close attention to how they really feel about our people and our community. They may cloak their agendas in Christianity and scripture but let’s be clear, their religion is white supremacy – and that’s far from anything remotely Christlike.