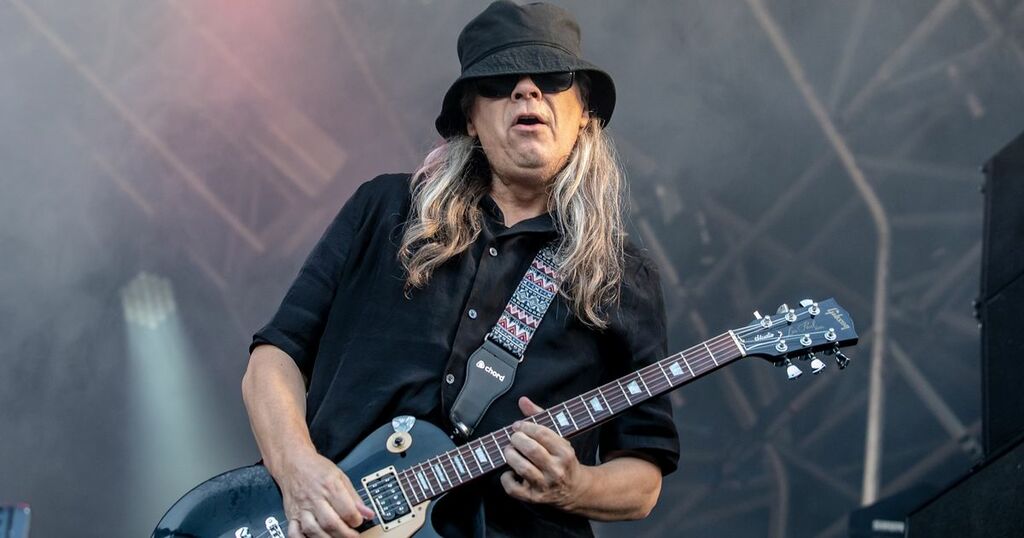 As an impressionable teen with a burning ambition to make it big, Andy Taylor was stuck between a rock (bar) and a hard place.

His bedroom may have backed on to the busy Cullercoats Crescent Club but the Angus Young wannabe, who styled himself on David Bowie, always knew his future lay far beyond the pubs and clubs of his native North East.

Nevertheless, the Taylors were a close-knit family: Andy had been raised by his father and his ‘nan’ after his mother left home without explanation. Breaking free — and breaking that bond — would be far from easy.

READ MORE: Go here for more what's on updates, news and reviews from around the North East

“I didn’t really want to leave my dad and I knew, in my heart of hearts, that he wanted me to stay,” said Taylor, who swapped the low lights of North Tyneside for the bright lights of Birmingham as a 19-year-old.

“But I’d been brought up by my nan when my mam left and she always said that I should leave.

“For a woman who was a Cullercoats fisherman’s wife she had a remarkably broad world view. I was never held back by my family and I’ve always been thankful for that. It shaped who I am and what I’ve achieved.”

And Taylor has achieved a significant amount during the last four decades.

As the co-writer of Duran Duran’s biggest hits, he became one of the most familiar faces on the burgeoning new wave scene. North American success followed a period of domestic domination as his band enjoyed Top 10 album success on both sides of the Pond.

And chart hits including Girls On Film, The Reflex, The Wild Boys and James Bond theme A View To A Kill became staples of every music fan’s mid 80s soundtrack.

In 1985 Taylor formed The Power Station with former band mate John Taylor and vocalist Robert Palmer before going on to record solo album Thunder, co-produce Rod Stewart’s multi-million selling album Out Of Order and emerge as the go-to producer for a new breed of British guitar bands.

With a new solo record slated for release later this year and a fruitful collaboration with reborn 90s rockers Reef gathering pace, Taylor is proud to admit that the seeds of a remarkably varied career were sown back home in Cullercoats.

“The first time I remember seeing a guitar was in Belle Vue Street just behind the Crescent Club,” he recalled. “I was seven or eight I think.

“Then I discovered that my dad had an old guitar. It was a knackered old thing but I got some catgut off my grandad and strung up one string.

“I learned to play one-note songs – I taught myself to do that. I watched Hold Down A Chord on the BBC and eventually got six strings on my guitar.”

Taylor was hooked and it was hardly surprising. Surrounded by music-loving relatives, he was always destined to follow in the family tradition.

“I got really upset when nan had the piano taken out,” added Taylor. “We were a very musical family on my dad’s side. My nan even used to play the spoons but she was a great singer who used to perform at the workingmen’s clubs.

“Dad was a good singer and a great harmonica player. I used to listen to singles with my dad and he’d play them over and over until I dropped off. Then my cousin got me into The Faces when I was nine or 10 – looking back, music was just more dominant in people’s lives back then and especially in our family.”

Taylor may have been immersed in music everywhere he looked but the man who would go on to star at Live Aid and count Princess Diana as one of his biggest fans still required guidance when it came to playing the guitar. Step forward much-missed Goldie founder Dave Black.

“The person who really brought me to a point where I could play the guitar properly was Dave,” explained Andy. “He was my neighbour and became my friend.

“I’d moved back to Cullercoats when I was 11 or 12 after attending Whitley Bay Grammar for a year. The Black family lived across the road. His brother Michael was a really good drummer.

“Dave played in Spiders From Mars after Mick Ronson left the band. He had this incredible Les Paul guitar and Marshall stack and when I was 13 I plucked up the courage to ask him if he’d give me a guitar lesson.

“He said he’d heard me playing in the front room and agreed to take me on. He charged me £1 a lesson and I had around eight lessons. He showed me the short cuts and a lot of interesting chords that I wouldn’t have naturally picked up on. Looking back Dave helped me an enormous amount. He then introduced me to Mal Lilley.”

Like Black before him, Lilley spotted something in a young Taylor that persuaded him to help hone one of the North East’s fastest emerging talents.

“Mal was a mentor to me,” added Taylor. “He was someone who played that special role in my life that can make the difference between success and failure. He knew the music scene in the North East inside out but he also took me down to London to play gigs and that really opened my eyes.

“Newcastle was a huge music town but it seemed like nobody ever left so there was quality as well as quantity! Through Mal I was lucky enough to be introduced to — and go on to work with — Mick Whitaker. What a voice he had! I grew up with all of those guys and they really pulled me up when I needed it most.”

By the time he’d celebrated his 18th birthday Taylor was already a big deal on the local music scene. A familiar face with a soaring reputation, the accomplished guitarist could have made a good living without ever leaving his native North Tyneside. But a year later he’d packed his bags and plotted his future.

“I just decided I had to take my chance and make the jump,” he added. “The day that I said I was going I remember my girlfriend wasn’t very happy — nobody ever left the North East, let alone Cullercoats, and I don’t think anyone was really prepared for it.

“I went to Birmingham and it was the best move I ever made. It was a real melting pot for music at the time — the scene and the city just fascinated me.

“Whitley Bay on a Friday night when I was a kid was mental but as a 13 or 14-year-old I just felt like a bit of a misfit and weirdo. I looked like David Bowie and I wanted to be Angus Young and I didn’t really fit in.

“It was exactly the opposite in Birmingham. I was accepted with open arms. When we eventually put Duran Duran together I realised that we’d all experienced the same kind of problems as kids. When you think about it a lot of bands have their roots in damaged childhoods and I was no different!”

On Wednesday September 15 that axe-wielding misfit returns home to play his first North East show in years. Appearing at Rock N Raise, a night of live music in aid of the Teenage Cancer Trust and the Graham Wylie Foundation staged at Newcastle’s Wylam Brewery, Taylor is promising a career-spanning set like no other.

“It’s fantastic to be able to support two such worthy causes on my home turf and I’ve got a few surprises up my sleeve,” he explained, following a summer appearing as special guest alongside Reef at festivals across the UK. “I’m loving being back on the road and playing live music again. I’ve been stuck inside for far too long!”

Taylor will be joined onstage by Hairy Biker, TCT advocate and top class percussionist Si King. And a stellar supporting cast of rock royalty including Spike (Quireboys), Luke Morley (Thunder) and Lorraine Crosby (Meat Loaf) has promised to raise the roof — and thousands of pounds — on what promises to be a night to remember within Exhibition Park. Planet Rock Radio’s Wyatt will wrap up the fundraiser with a DJ set featuring a slew of rock classics and Taylor added: “It’s shaping up to be some night.

“What started off as a chance conversation between old friends has turned into something really special. I’ve been waiting for this opportunity for some time and now it’s almost here I can’t wait.”

A limited number of tickets remain for Taylor’s first live solo show since November 2019. Visit www.wylambrewery.co.uk or www.ticketweb.co.uk for details.