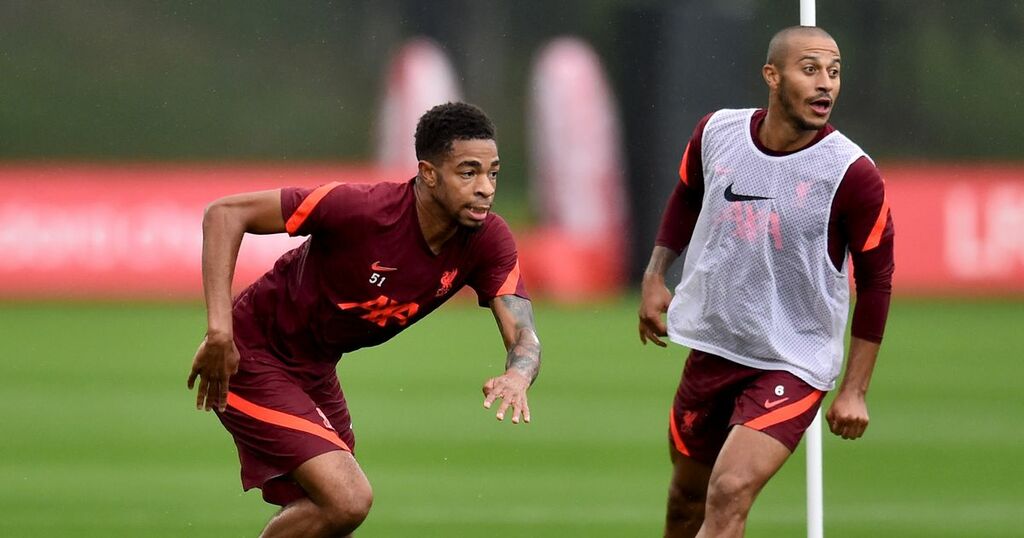 Liverpool are gearing up for their return to Premier League football this weekend by stepping up their training.

The Reds are back in domestic action on Sunday as they travel to face Leeds United at Elland Road.

Jurgen Klopp’s side, like the rest of the English top flight, have had a two-week hiatus due to the first international break of the season.

Klopp has recently given an injury update on his squad following many returning from representing their respective countries.

Thursday has seen the players pictured training for the first time since before the draw with Chelsea, and there was plenty to catch the eye.

Here is a selection of things that we spotted from Liverpool’s latest training session.

Klopp confirmed that both Harvey Elliott and Virgil van Dijk are okay to play against Leeds on Sunday.

Elliott withdrew from the England Under-21 squad with an injury, while Van Dijk appeared to suffer a knock to his ankle while representing the Netherlands.

However, Klopp says that the pair are fit to play against Leeds, and as a result have been pictured taking part in full team training.

Van Dijk has started all three league games so far this season, while Elliott was included in the starting line-ups for the games against Burnley and Chelsea.

One player who has been on the treatment table over the past few weeks is James Milner.

The 35-year-old picked up a knock after the opening day win over Norwich City, which kept him out of the last two games.

Klopp spoke before the training session that he was not sure if Milner would feature, but it appears that he has.

Milner has been pictured taking part in full training, handing Klopp a midfield boost ahead of the trip to Elland Road.

Youngsters get their chance

Klopp is always keen to get young players involved in training, and two were spotted in the latest session.

Kaide Gordon made an impression during pre-season and was pictured taking part, and there was another player who many fans may not be too familiar with.

Elijah Dixon-Bonner, who has performed well for the Under-23s this season, has been taking part in first-team training.

Over the summer, the 20-year-old had a trial with Portsmouth and it was expected that the midfielder would leave Anfield.

However, a move away did not materialise and now the youngster is putting himself in the thoughts of the Liverpool hierarchy enough to be given a chance to train with the first-team.

There were concerns over Naby Keita after the midfielder was caught up in the political turmoil in Guinea.

Keita was due to play for Guinea in their World Cup qualifier against Morocco, but the game was postponed due to the volatile situation in the country.

It was confirmed on Tuesday that Keita had managed to get a flight out of Guinea to return to England.

Klopp said on Thursday that Keita was okay, and the 26-year-old was pictured taking part in full training with his team-mates at Kirkby.

No Firmino or Minamino

Two players who weren't pictured in training were Roberto Firmino and Takumi Minamino.

Firmino suffered a hamstring injury during the draw with Chelsea, while Minamino picked up a knock while on international duty with Japan.

Klopp already confirmed that the pair were not fit to play against Leeds this weekend, and that has been verified by them not taking part in team training.