A video of a handful of screeching tanks and lumbering armoured vehicles mounting a transport train in Crimea accompanied the Russian defence ministry’s trumpeted announcement that some of the forces that have been encircling Ukraine will “head for their garrisons”, writes Dan Sabbagh.

Such evidence is clearly far too tentative to amount to anything definitive, however, and many are sceptical about the pledge to withdraw. The Nato secretary general, Jens Stoltenberg, said this morning the alliance had not seen any evidence of a Russian withdrawal.

Meanwhile, Joe Biden has claimed that 150,000 Russian troops remain in a “threatening position” around Ukraine, despite Russian claims of a withdrawal, and warned that an invasion “remains distinctly possible”.

On Wednesday morning, Stoltenberg said Russia was building up its military forces on Ukraine’s border with more troops on their way, contradicting Moscow’s claims of a drawdown.

US attorneys representing victims of Jeffrey Epstein have hailed Tuesday’s settlement between Prince Andrew and Virginia Giuffre as a “victory” for survivors, with one claiming the royal’s “arrogance” stood in the way of settling sooner.

Giuffre filed a civil lawsuit against the Duke of York in New York last year, accusing the prince of sexually abusing her when she was 17. The move represents a remarkable turnaround for the duke, who has always denied having a sexual relationship with Giuffre and had vowed to clear his name in court.

“It’s another banner day for the survivors,” Robert Lewis, a New York-based lawyer for Sarah Ransome, who was abused at the age of 22 and settled a lawsuit with Epstein and Ghislaine Maxwell in 2018, told the Guardian.

The House select committee investigating the Capitol attack issued subpoenas yesterday to top Trump campaign and Republican officials involved in the scheme to send false electors for Donald Trump in states won by Joe Biden, as it examines the coordination behind the effort.

The panel sent subpoenas to six individuals who were involved in a brazen attempt to meet and submit fake electoral college certificates that formed the backbone of a Trump-connected scheme to have Congress return the former president to office.

Congressman Bennie Thompson, the chairman of the select committee, suggested in a statement that the subpoenas aimed to compel cooperation from the key actors about whether the Trump White House oversaw the effort to have “alternate electors” participate in the scheme.

Stat of the day: US sea level to rise as much in next 30 years as in past century – study

The vast US coastline is being assailed by rapidly encroaching oceans, with up to 1ft of sea level rise expected in the next 30 years – an increase that equals the total rise seen over the past century, a major US federal government report has found. The seas are rising significantly faster around the US than the global average, a situation that will cause a “dramatic increase” in disastrous flooding.

Don’t miss this: how complicit are the wives of dictators?

The Dictator’s Wife is a debut novel by Freya Berry which explores how tyrants deploy glamorous spouses to soften their image: velvet gloves to their iron fists. The book poses an important question: to what extent should such women be judged as complicit in their husbands’ regimes? They are often survivors of brutal patriarchy and lack genuine political power. But do they, too, have blood on their hands?

Climate check: US west ‘megadrought’ is worst in at least 1,200 years, study says

The American west has spent the last two decades in what scientists are now saying is the most extreme megadrought in at least 1,200 years. In a new study, published on Monday, researchers also noted that human-caused climate change is a significant driver of the destructive conditions and offered a grim prognosis: even drier decades lie ahead. Turning up the temperature – the result of human-caused heating – has played a big part.

Scientists at Harvard University have engineered an artificial fish whose flapping tail is powered by cells from a human heart, a groundbreaking project that has ignited hopes for the future of cardiac research. The scientists, in collaboration with Emory University, built the “biohybrid fish” using paper, plastic, gelatin and two strips of living heart muscle cells, the contractions of which pulled the fish’s tail from side to side and allowed it to swim. 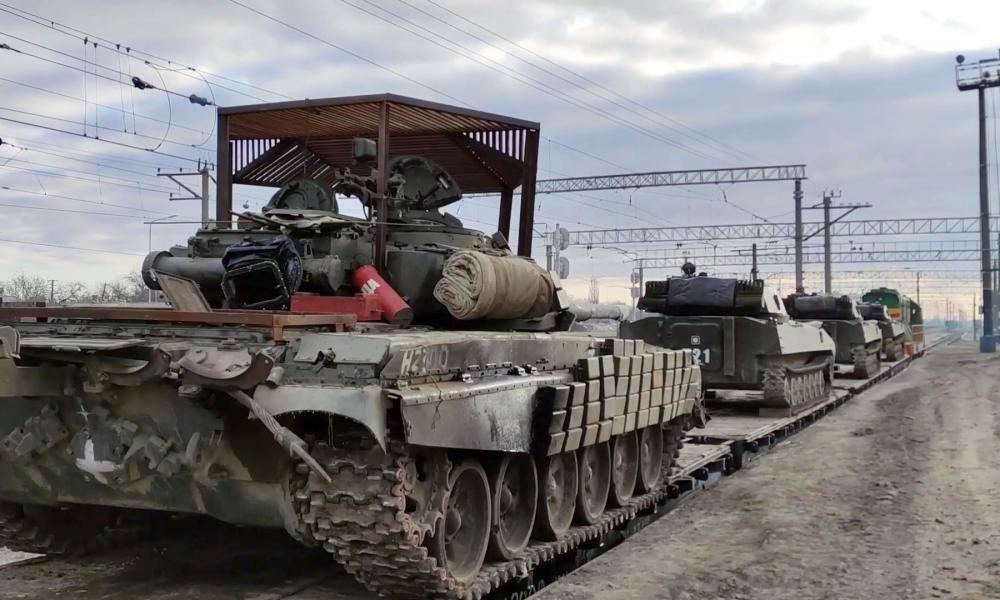 Russian pledge of troop withdrawals met with widespread scepticism
Analysis: Experts have little faith in announcement and say there are no signs of de-escalation on Ukraine’s borders

The Guardian - UK
One subscription that gives you access to news from hundreds of sites
First Thing: Russia says it will withdraw some of troops from Ukraine border

Move could be sign of de-escalation amid fears of invasion but size of withdrawal is unclear. Plus, Sarah Palin’s lawsuit…

The Independent UK
One subscription that gives you access to news from hundreds of sites
‘His final disgrace’: how the papers covered Prince Andrew’s sex assault case settlement

Figures vary about the size of the deal, and some report it will mean a lifetime of exile from royal…