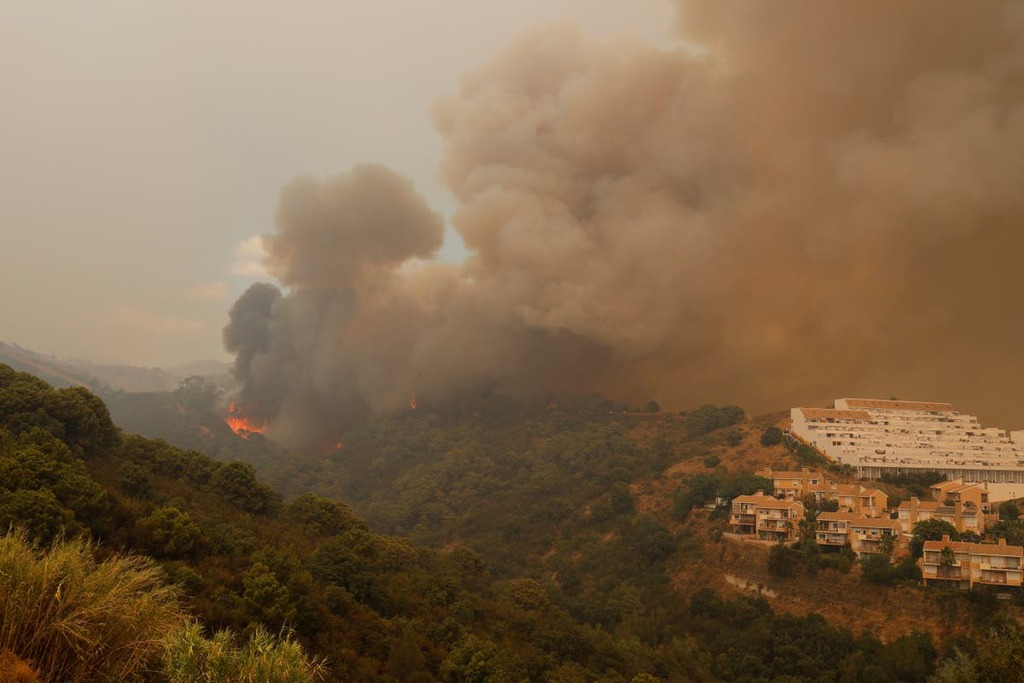 A firefighter has been killed and more than 1,000 people were evacuated from their homes as a wildfire raged out of control on Friday in the hills above Spanish resort town of Estepona.

The blaze in the Sierra Bermeja mountain range started late on Wednesday and high winds were making it harder to bring under control as it spread along the Costa del Sol.

A 44-year-old firefighter, who has not been named, died when he was encircled by the blaze on Thursday night.

A column of smoke extended for 500 kilometres and can be seen on satellite images from space.

The fire has destroyed 3,600 hectares (8,896 acres) of forest above Estepona, a Spanish resort which is popular with British holidaymakers and expatriates.

Lynnclaire Dennis was woken by smoke and burning ash as the fire encircled her house.

“I looked out of my window and it was apocalyptic. It was just a red glow. It was terrifying. We have an image of Hell and brimstone and this was what it looked like,” she told The Independent.

“I got my cat, my computer and a few other things and left but as I was coming down the stairs I missed the last step and hurt my ankle. I was in agony. I went back to my bedroom for 15 minutes to make sure my ankle was not broken.”

Ms Dennis, 69, an American scientist, managed to drive to a friend’s house but later returned to her home when she believed the fire had passed.

“The next thing I knew was that there were police and sirens outside my house again and I had to leave again. Whatever happens, it is all material stuff. You have to look after the people you love.”

Twenty-nine planes and helicopters were scrambled to work with 400 firefighters to try to extinguish the fire.

“What we have is a hungry monster. They are extremely voracious fires. We intend to confine it, enclose it within a few lines of control and bring it down,” said Alejandro Garcia, deputy director of Infoca, the regional fire brigade.

Carmen Crespo, the Andalusian regional agriculture minister, told journalists that investigators believe the wildfire had been started on purpose.

“What has happened and the consequences, fundamentally, on human lives and the natural environment are not fair,” she said.

Dense smoke from the blaze forced authorities to close a series of smaller roads in the area.