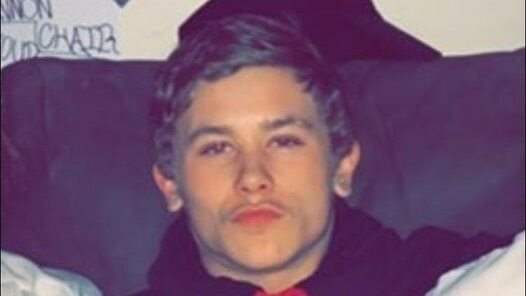 The family of a missing 18-year-old is "not coping" with his disappearance and is sure someone has information, his sister says.

Mason Szanto was last seen on October 3 at about 10:00am near the sports oval in Leigh Creek, a small town in South Australia's outback.

He went to Leigh Creek with his girlfriend to visit her family, but police believe he may have tried to hitchhike back to Port Augusta after an argument.

"We are not coping at all. This has really broken our family," Mr Szanto's sister Kathleen told the ABC in a statement.

He was last seen wearing a black shirt, black or grey pants and carrying a Champion bag.

No phone or bank activity since October 3

Superintendent Paul Roberts, the officer in charge of the far north region, said Mr Szanto had made no contact with anyone since his disappearance.

Officers had to call in the police helicopter and use drones to scour a large area because of the paucity of information about Mr Szanto's whereabouts.

They first searched all vacant properties in Leigh Creek, without success.

The effort also called upon Port Augusta detectives and the State Emergency Service.

"There's no distinct or restricted area as to where Mason may or may not be," Superintendent Roberts said.

"So we started searching within the first 300 metres of the oval on the thought that he may have tripped or injured himself, and the search area has continued to expand from there on."

He was concerned Mr Szanto was unprepared to spend an extended period away from his family, or outdoors.

"In this circumstance we don't believe that Mason has left the family group with any equipment or any preparedness, believing that he may have hitchhiked from Leigh Creek back to Port Augusta."

'We will not give up until Mason is home'

Kathleen Szanto is one of the missing man's five siblings.

"These are small communities.

"We just need our boy home. Our family is absolutely broken. We will not give up until Mason is home."

Police are still investigating the disappearance and are urging anyone with information to get in touch.

"We are imploring the public if they have any information in relation to Mason Szanto, if they have seen him, if they've had contact with him since the 3rd of October, could they please contact [police] on 131 444," Superintendent Roberts said.