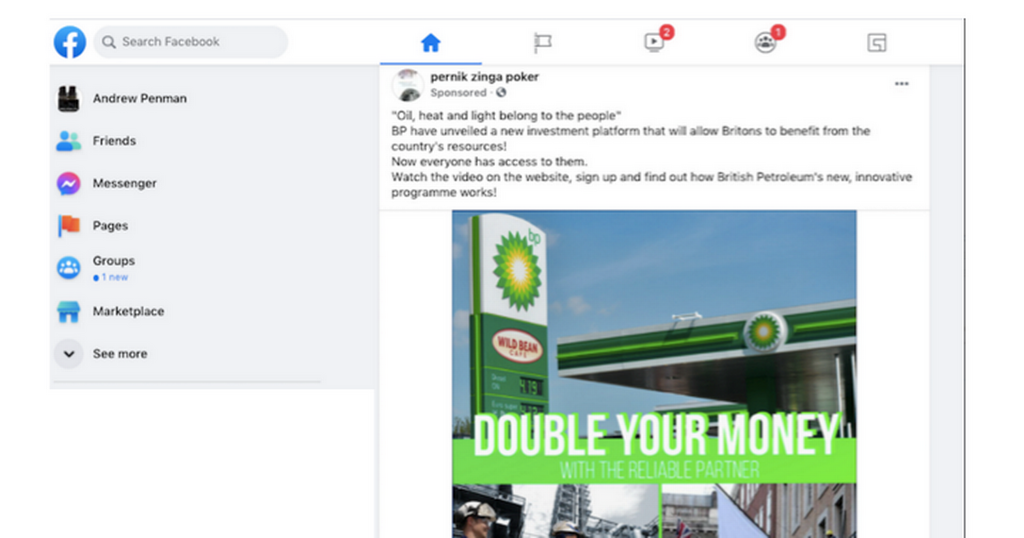 Every time I log into ­Facebook I’m bombarded by scam adverts, and the current batch targeting me rip off the branding of energy giant BP.

Clicking on one of the ads brought up a page filled with more stolen BP branding and a made-up statement from its chief executive, Bernard Looney.

“We have decided to open up access to investment to all citizens, because it will be beneficial both for BP, and for the people of the UK,” he was quoted as saying.

"The fact is that there is currently a demand for gas on the world market. The demand for it is growing rapidly in all countries in the world. For this reason, we have decided to quadruple gas production and attract investors form all over the UK.

If you don’t notice that the url is not the genuine BP.com then you might not spot that this is a fake and be tempted to input your contact details.

I submitted a mobile number and email address and was phoned by a sales rep with a thick West African accent, who said: “It’s Evan Hall, manager from British Petroleum Company, how are you doing?”

Evan hasn’t done his homework because BP has not called itself British Petroleum for more than two decades now.

“We just developed a new option in our company to work with automatical (sic) trading, it’s a special type of the ­algorithm, it can make the most powerful and better deal for you,” he went on.

“The win rate of the programme is nine successful deals to one loss.”

To give himself credence he insisted “We are regulated by the Government” and claimed to be calling from BP’s London head office “near Central Park” – which was in New York last time I checked.

He wanted me to pay a deposit to open an account on a website for trading in high risk gambles called Contracts for Differences or CFDs.

The small print on blueprintglobalpartners.com revealed one particularly alarming clause.

“By becoming the Client of the Company the Client agrees not to request or demand a refund or chargeback from their bank or credit card provider at any time,” it states.

“Any attempt to do so may be considered as a breach of the client Agreement.”

To try to get Evan off the phone I made up a lie about having to urgently pick-up medication for a heart condition but even that did not stop his sales pitch.

“We have limited places, are you really afraid that you will be late for the pharmacy?” he continued.

When I asked him to prove his credentials by messaging me from his BP email address he snapped: “You are trying to find out everything about me, I am not going to waste my time with such things.”

BP has chosen not to comment on the mass of posts using its branding.

Facebook told me that the scam ads have been removed.

"We're dedicating significant resources to tackling scams on and off our platforms," said a spokesperson.

"We work not just to detect and reject scam ads on our services, but block advertisers and, in some cases, take them to court. While no enforcement is perfect, we continue to invest in new technologies and methods to protect people on our service."

On Monday, Charles Randell, chairman of the Financial Conduct Authority, said Facebook and other social media platforms must “do the right thing” and stop carrying adverts for scams.

And in case asking nicely doesn’t work, he called on the Government to expand the scope of its Online Safety Bill to include online advertising, which is the prime source of investment frauds.