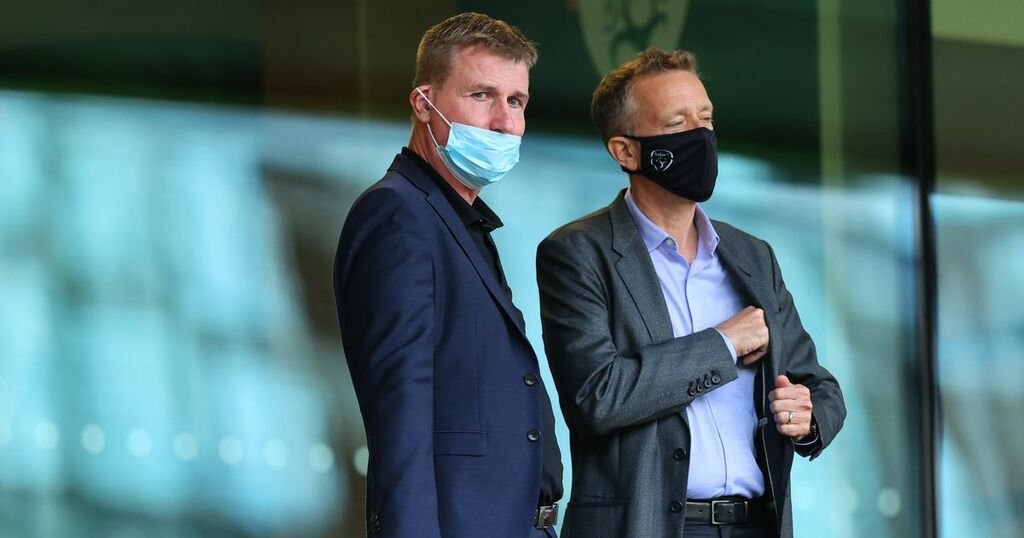 FAI boss Jonathan Hill has refused to offer Stephen Kenny any assurances over a contract extension.

The Republic of Ireland manager has just one win from his 16 games but wants to remain in charge for the Euro 2024 campaign.

His contract expires in July and World Cup qualification is already all but over after banking just two points from five games in this campaign.

And breaking his silence today, FAI chief Hill refused to offer his unequivocal backing to Kenny and then stressed the importance of winning matches.

Speaking at the launch of ‘SKY’ as the senior Ireland women’s team new sponsor, Hill said: “It's no different for Vera (Pauw) or any of our international teams, be it senior teams or underage teams, every game we play we want to win.

“In the same way I would hope everybody in this room, the media and the general public, want Irish teams to win when they play.

“That is a very simple sporting objective, and it hasn't changed this week or last week, and won't change as we move forward.”

Asked if he backed Kenny, Hill said: “Look, we have said very clearly what our normal approach is to every international window.

“We review that window at the end of it at our board meeting. We do that hopefully in a calm and collective way.

“We definitely do it in a collective way, if that makes sense, as a group and we will continue to do it as a group.

“We will review the whole World Cup qualification campaign in the same way in November at the same board meeting.

“We will discuss all the issues and we will have our reports that we will look at and we will review them accordingly.

“One thing I will say about the board over the last 10 months that I have been involved is that there is a really open process there.

“Everyone will be able to give their view. This isn’t about one person. It isn’t the view of one person, it is the view of 12 men and women.

“Hopefully we will do that in a calm and considered manner.”

This week, Kenny spoke publicly for the first time about wanting to lead Ireland to the Euro 2024 finals in Germany.

Asked if this was part of the FAI’s plan, Hill said: “For me, the context of what Stephen was saying is that it is very difficult to qualify for a FIFA World Cup.

“Statistically it is almost twice as difficult for a FIFA World Cup with 13 teams as it is to qualify for a Euros with 24 teams.

“It is not an easy process. We were the third seed in that group and clearly we were going to be playing two strong sides. And we have played two very strong sides.

“You heard me saying, with regards to the Sky announcement, is that for Stephen and his team, the FAI staff and board, you guys as the media and the public, expect or want us to win every single game that we play at every single level? Absolutely.

“But we know that football does not always deliver that and we have to be realistic in relation to that. That is my take on the context of Stephen’s comments.”