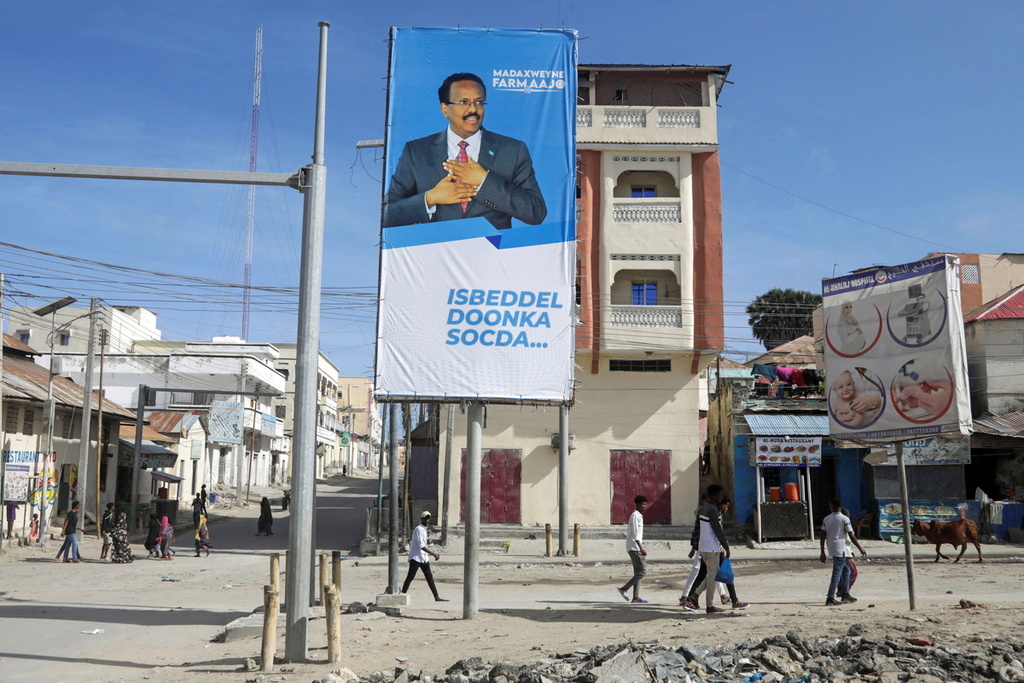 Reuters
Somalia's new president to be elected by parliament behind barricades

Reuters
Voting to elect Somali president goes to second round

Sworn in early on Monday, Hassan Sheikh Mohamud becomes the first Somali president to win a second term. He has…

Radio France Internationale
Get all your news in one place
Latest Politics news:

Clive Palmer and One Nation flopped at the election. What happened?
Many commentators tipped Clive Palmer’s United Australia Party (UAP) and Pauline Hanson’s One Nation to perform well this election by…

The Conversation
Read news from The Economist, FT, Bloomberg and more, with one subscription
Learn More
Politics with Michelle Grattan: Treasurer Jim Chalmers on the 'spiky' parts of Australia's inflation problem

New treasurer Jim Chalmers has been in multiple briefings since Sunday, and the message he sends in this podcast is…

The Conversation
Whose ‘identity’ are we preserving in Auckland’s special character housing areas?

The Conversation
Public police are a greedy institution

The ongoing calls from communities to defund public police, that grew louder following the police killings of George Floyd and…

The nightly television news coverage of the 2022 federal election was among the most juvenile and uninformative in 50 years.

The Conversation
From analysis to good news, read the world’s best news in one place
Calls for new innovation patents after old scheme abolished

InnovationAus
Madison Cawthorn and the Mischief Rule
Eugene has a post on today's decision by the Fourth Circuit (per Judge Heytens) on Rep. Madison Cawthorn's challenge to…

Thirty-six aspirants are competing in Somalia's long-delayed presidential election on Sunday, to be decided by parliament in a heavily-guarded airport hangar given the impossibility of a popular vote in the dysfunctional and violent nation.

Two former presidents and a regional leader are strong contenders. There is only one female candidate.

Riven by civil war since 1991, the Horn of Africa nation has struggled to rebuild institutions in the face of a bloody insurgency by the al Qaeda-linked al Shabaab militants, who control large swathes of the countryside.

A rift between President Mohamed Abdullahi Mohamed, whose bid to extend his presidency was thwarted by parliament last year, and Prime Minister Mohamed Hussein Roble, has divided security services.

That has distracted from the fight against al Shabaab and triggered gun battles between factions.

On Sunday, the nation's bicameral federal parliament, comprising the 275-member lower house and 54-member senate, will together elect a new president in several rounds of voting.

In the absence of a functioning state, the voting system is based on a power-sharing formula. Somalia's four largest clans each hold 61 seats in parliament, while the smaller clans share the remaining 31. Seats in the senate are chosen by the states.

Parliament's organising committee has asked an already present African Union peacekeeping force to protect the hangar in Mogadishu. Last month, the peackeeepers faced off with local police during the elections for speaker of the upper and lower houses.

WHO IS LIKELY TO WIN?

Critics of Mohamed won those races last month, suggesting that he does not enjoy popular support among lawmakers and may not retain his post.

Parliamentarians from Jubbaland and Puntland states have been at odds with Mohamed over his attempts to centralise power, so are likely to line up behind an opposition figure, while those from South West state are believed to back the incumbent.

Ahmed, a former Islamist, took over as head of a Western-backed transitional government in 2009, establishing the national army and helping push al Shabaab out of Mogadishu.

Mohamud, a former peace activist and academic, was accused by donors of not doing enough to fight graft while in office.

Close contenders and likely king-makers in the second round of voting are former Prime Minister Hassan Ali Khaire, who served from 2017-2020, and Puntland region president Said Abdulahi Deni.

In previous elections, rival candidates have accused each other of bribing lawmakers. Former foreign minister Fawzia Yusuf Adam is the only woman in the race, but is regarded as an outsider.

WHY IS IT IMPORTANT?

In February the International Monetary Fund (IMF) warned that its almost $400 million budget support program would not be extended unless legislative and presidential elections were completed by the middle of this month.

The government cannot fund its budget or pay its soldiers without external support and Somalia is undergoing the worst drought for 40 years.

Reuters
Somalia's new president to be elected by parliament behind barricades

Reuters
Voting to elect Somali president goes to second round

Sworn in early on Monday, Hassan Sheikh Mohamud becomes the first Somali president to win a second term. He has…