After a series of movies including the "Top Gun" sequel, "Minions: The Rise of Gru" and "Thor: Love and Thunder" brought waves of audiences back to cinemas, the cinema industry is facing a severe dry spell.

Since the so-so debut of Sony Pictures' Brad Pitt action movie "Bullet Train" early this month, which grossed $30 million during its opening weekend, there have been no Hollywood releases with realistic blockbuster potential. In fact, there are precious few probable hits on the release schedule until the Oct. 21 debut of Warner Bros.' "Black Adam," a DC superhero movie starring Dwayne Johnson.

The box office drought has put major pressure on some of the biggest cinema chains. This latest lull was brought on by a combination of factors, including COVID-19-driven production delays, a bottleneck at visual effects firms and a winnowing of the industry as more films go to streaming services instead of theaters.

Regal owner Cineworld, the world's second largest theater operator, this week said the dimmed outlook had forced it to seek options to relieve its massive debt load. The company said it was in "active discussions" with stakeholders to explore options for finding liquidity or restructuring its balance sheet. The company reported having $8.9 billion in net debt as of Dec. 31, which includes $4 billion in lease liabilities.

"Despite a gradual recovery of demand since reopening in April 2021, recent admission levels have been below expectations," the British company said Wednesday in a statement. "These lower levels of admissions are due to a limited film slate that is anticipated to continue until November 2022 and are expected to negatively impact trading and the group's liquidity position in the near term."

Vue International, another British theater company headquartered in London, said last month it would be taken over by lenders in a restructuring.

AMC Theatres CEO Adam Aron on Thursday sought to reassure investors by weighing in on its rival Cineworld's struggles. Leawood, Kansas-based AMC, the world's largest theater circuit, narrowly escaped bankruptcy in the wake of the COVID-19 pandemic, which shut down theaters around the globe. A group of enthusiastic retail investors helped save the company by piling into the stock and championing it online, often with humorous memes, a practice Aron egged on.

Aron, in a written statement, acknowledged the weak box office, which was expected, but said he's still "quite optimistic" about the recovery of the company's theaters. He also touted the upcoming release of a new security dubbed AMC Preferred Equity — or APE, in a nod to the retail traders' nickname for themselves — which begins trading on the New York Stock Exchange on Monday.

"AMC ended the second quarter of 2022 with more than $1 billion of liquidity, thanks to significant amounts of cash raised in calendar years 2020 and 2021," Aron said. "Accordingly, we remain confident about AMC's future."

This is not the first time Aron has responded publicly to a setback for his biggest competitor.

In December, after a Canadian court hit Cineworld with about $1 billion in damages for scrapping a merger with Canadian chain Cineplex, Aron tweeted a picture of cash. "Anything distracting or destabilizing our biggest competitor brings opportunity to AMC," he said in the tweet.

The financial struggles of the big theater chains have raised the specter that the long-predicted contraction of movie theaters in the U.S. and the rest of the world was only delayed by the box office rally of the first half of summer.

Since the start of the key summer movie season, films have generated $3.2 billion in ticket sales, still down about 20% from the same period of time in 2019, according to data firm Comscore. August has been brutal, with revenues for the month down 43% from the same month three years ago, before the pandemic.

This weekend will see the release of Universal Pictures' "Beast," starring Idris Elba, and "Dragon Ball Super: Super Hero," based on the venerable anime franchise. Neither is expected to do much business, though "Dragon Ball Super" winning the weekend would be a real victory for its distributor, Crunchyroll. 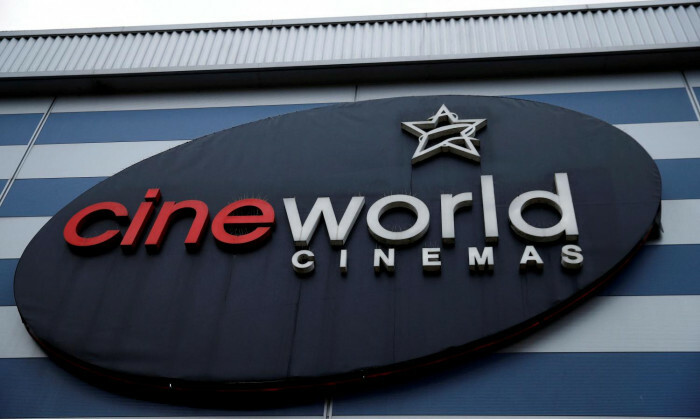 Cineworld Nears Bankruptcy as Theater Comeback Lags
Cineworld Group PLC, the owner of Regal Cinemas, is preparing to file for bankruptcy within weeks after struggling to rebuild…

Bangkok Post
From analysis to the latest developments in health, read the most diverse news in one place.
Cineworld 'preparing to file for bankruptcy' following pandemic hit to audiences

Nottingham Post
Cineworld ‘prepares to file for bankruptcy within weeks’

Cineworld shares have plummeted after reports the cinema chain is preparing to file for bankruptcy “within weeks”.

Liverpool Echo
One place to find news on any topic, from hundreds of sites.
Over a dozen London cinemas risk closure as Cineworld reportedly preparing for bankruptcy

London’s Picturehouse theatres could also be at risk