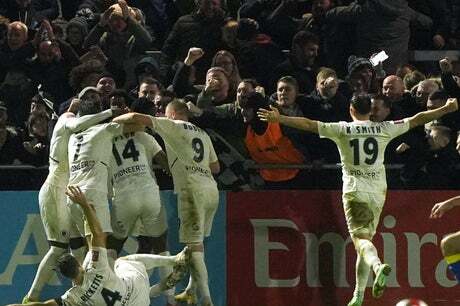 Boreham Wood and Kidderminster booked their places in the fourth-round of the FA Cup on Saturday with huge upsets on a day of pure drama.

It all began with a near-miss as Mansfield were denied a shock at home to Middlesbrough after a late John-Joe O’Toole own goal in the earliest lunchtime kick-off, but come Saturday evening several lower-league teams had pulled off shocks.

At Meadow Park, Tyrone Marsh fired National League side Boreham Wood ahead against League One AFC Wimbledon after only ten minutes.

Their place in the hat was secured in the dying moments when Adrian Clifton turned home a precise cross from the left to send the club one-round better than their run to this stage last season.

The gap between the clubs was even bigger at Aggborough as sixth-tier Kidderminster overcame a 79-place gap in the Football League to beat Reading.

Despite George Puscas’ potentially-offside opener, the Harriers levelled up when captain Sam Austin’s strike beat Rafael’s weak palms before an 82nd-minute winner from Amari Morgan-Smith, who turned home a near-post corner in a goalmouth scramble.

With Cambridge winning at Newcastle, there was another Premier League casualty at Turf Moor as Huddersfield came from behind to beat Burnley with a late Matty Pearson header.

Hartlepool also recovered from a goal down to beat Championship Blackpool 2-1, the winner coming from teenage substitute Joe Grey.

A rollercoaster affair at DW Stadium saw five second-half goal as Wigan beat Blackburn thanks to a stoppage-time winner from Thelo Aasgaard.

Not to be outdone, Barnsley and Barrow shared nine goals in a 5-4 thriller with the Terriers coming out on top after extra-time.

Brighton required extra-time as well to beat West Brom at The Hawthorns, Neal Maupay supplying the winner, while Queens Park Rangers were the only team needing penalties of the 3pm kick-offs as they overcame Rotherham at home.

Brentford and Leicester both won 4-1 after Crystal Palace’s earlier win at Millwall. There were also wins for Coventry, Fulham and Peterborough.

Southampton had Yan Valery sent-off after 30 minutes, but they were still good enough to beat Swansea 3-2 in a match that also needed 120 minutes.

Bournemouth eased past Yeovil 3-1, while Plymouth beat Birmingham 1-0 away from home.