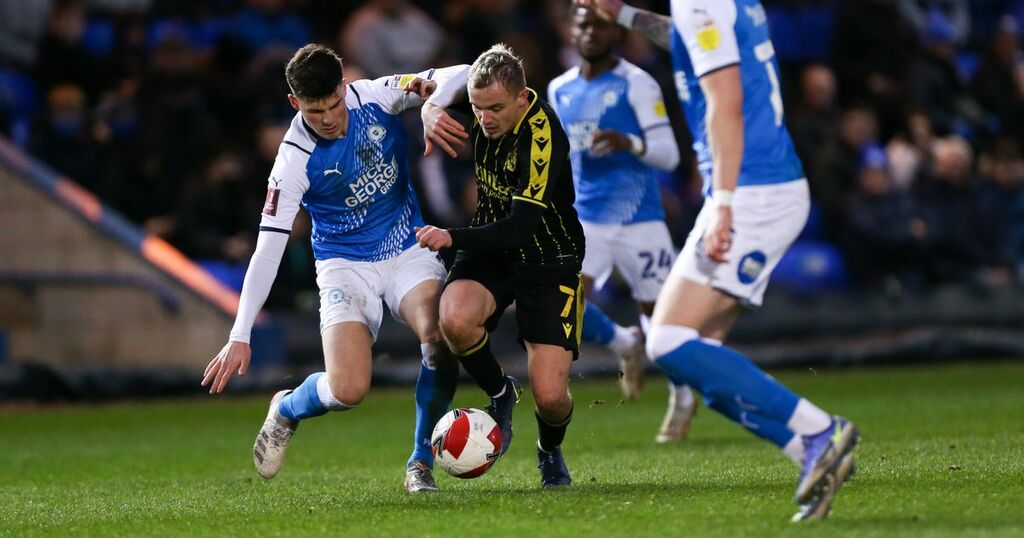 Rovers returned to Bristol brimming with optimism despite dropping out of the FA Cup at the third round stage. A youthful team left Cambridgeshire with heads held high, having competed for long periods with superior opposition.

Above all, Saturday was a return to normality for many as Rovers played their first competitive match for four weeks. The usual Christmas schedule is a jewel in the festive crown for football fans, but Gasheads young and old barely saw a ball kicked since festivities had started. Live football was back, Rovers were back in action and an away day took the Gas to the East Midlands.

It was a lottery trying to work out the starting XI in the run-up to the game, given COVID infections and a raft of injuries having ripped through the squad. The virus had taken out the manager too and, presumably, some of the notable absentees come matchday. Anyone who managed to predict nine or more of the starting line-up must surely own a crystal ball!

But there was no bigger surprise than the inclusion of James Connolly from the off, who was announced merely half an hour before line-ups were announced. The Cardiff U23s captain, without a minute of professional football to his name, fills an obvious hole in the wake of Mark Hughes’ departure. He also adds cover at right-back, where we are sorely lacking at the moment. It was to be quite the test for him though, and lining up against Siriki Dembele was sure to be a baptism of fire.

The front side of the team though provided promise. Rovers luckily had three of their best attacking talents available in Sam Nicholson, Antony Evans and Luke Thomas. For the latter, it was a big game having featured little since his public chastening from Joey Barton recently.

Speaking of big games, the same can be said for Zain Westbrooke, who was afforded a huge opportunity in the middle of the park. Whether this was a shop window appearance time will only tell, but the opportunity to impress and get minutes under his belt was nothing less than a golden chance for the former Coventry midfielder.

I felt Westbrooke characterised the flow of the game for Rovers. In the first half, a deep-set Rovers hung back with the ball and failed to progress up the pitch. We at times invited Peterborough onto us and Westbrooke, often left without options ahead, went square or backwards.

His performance was similar to the cup loss at Exeter, where he was substandard in the opening period, but upped his game later on by looking to get on the ball and seeking a quick forward pass. Gasheads in the main stand thought he had taken us into extra time with a curling strike that narrowly avoided the post to hit the rear stanchion of the net. He will reflect though on a first-half where he could have asserted some more dominance on the ball when he had it.

It wasn’t long ago I was criticising the manager’s approach to getting the best out of Thomas. I’m not a fan of the public hairdryer treatment, but it seemed to work on the pitch on Saturday. Nonetheless, I was still surprised to hear such strong words condoning Barton’s approach from the player himself after the game.

He was quoted saying he needed to "get his head out of his backside", but also impressively recognised the scale of work left ahead of him. For a player with personal problems, it’s pleasing as a fan to see him turn the corner on and off the pitch. He was a real threat on the right flank in the second half, keeping a high and wide position to cause the opposition defence problems.

Paul Coutts’ performance typified that of a captain in many ways on the weekend. He was the sole senior figure in midfield, with a huge burden placed on his shoulders given the inexperience behind him too. But he was Rovers’ best player, shielding the defence as best as he could, buying time and space with smart turns and passes.

The real captain’s moment though came with Evans was brought down by Dai Cornell for the penalty. With Evans needing to leave the field having received treatment, and Thomas loitering gingerly on the penalty spot with the ball under his arm, Coutts showed his authority and leadership. He prised the ball from Thomas’ grasp, placed the ball on the spot and dispatched it calmly, before wheeling away to shush the supporters of his former club behind the goal.

With Rovers trailing, I found myself calling for Brett Pitman’s introduction. For all the goals we’d scored without him, we lacked an outlet to occupy defenders. Once on the pitch, Pitman’s presence gave the centre backs a lot to think about and allowed Evans and Westbrooke time and space on the ball behind him. With Ryan Loft now in the building, the pressure we built with a forward on the pitch only bodes well for the future, with Loft sure to pose even more problems than Pitman given his athleticism.

Unbeknownst to Pitman though, he featured in what was perhaps my moment of the day. Gasheads on the far side, in close proximity to former Rovers striker Jonson Clarke-Harris, decided to have a bit of fun with Peterborough’s number nine. “You’re just a s*** Brett Pitman,” was the chant from Rovers fans, to the amusement of many.

Despite the inexperience in defence and a slightly cagey first half, the backline was also the source of optimism. Connolly’s performance deserves applause given he’d never kicked a ball in professional football before. He looks to have the raw game to succeed, and if Barton can have half as much success as he has with Connor Taylor, we’ll have another good centre back on our hands.

Nick Anderton was the rock once more, surely solidifying his place ahead of the competition. Although in a familiar position, he had a different role to play, tasked with being the leader in the backline. He was vocal throughout and didn’t let up, marshalling his troops effectively.

What more can I write about James Belshaw too? If it weren’t for his sweeper-keeper abilities, Peterborough could have had six or seven. Take away his crunching blocks and saves too and it could have been double figures.

He may have been at fault for the first goal, but that takes nothing away from another fine performance between the sticks. It’s hard to see Big Anssi Jaakkola getting a look-in should he continue that form, and that’s a huge statement given how good the Finn has been for Rovers in recent seasons.

It would be amiss not to mention that disallowed goal too. You may be tired of Barton bemoaning the officiating standards, you may not be, but you cannot disagree with him. A shambolic officiating performance infuriated both teams on Saturday, which started with appalling decision making from the far-side linesman in the first half.

Standing directly in line with the Rovers defence, it was easy to see how poor he was. I’d have needed two hands to count his errors with offside decisions, and replays suggest Sammie Szmodics was offside for the first goal too.

The man in the middle though would surely come a close third to Trevor Kettle and Brett Huxtable at the wrong end of the referee stakes. All that separated Andy Davies from the other contenders was the authoritarianism he lacked that Kettle and Huxtable certainly do not.

That wasn’t to say he wasn’t infuriating though, making basic mistakes such as awarding Rovers a goal kick when a Peterborough forward’s shot had cannoned behind off a defender’s leg via a block. But his worst decision was the baffling one to award a late free-kick for no reason, ruling out a clear goal in injury time and in doing so, denying Rovers the chance to take Peterborough to extra time.

Whatever the result, the mood after the game is no doubt positive. That is down to our performance levels with so many injuries and illnesses against better opposition. Highly skilled and agile forwards in Dembele and Szmodics made the difference on the day, but Rovers can hold their heads high for keeping their colleagues at bay for most of the game. Our forward line created chances and pressed on late in the game, and Thomas’ newfound form is good news for all.

So there could be much to look forward to, something Thomas alluded to after the match, saying: “I don’t want to give too much away, but we should be positive. There are a lot of good things coming to Bristol Rovers.” Whether that is in the form of transfers, new tactics or just form itself, time will tell.

But what is for sure though is a packed fixture list for the rest of the season to look forward to. Rovers will have all eyes on three points at home to Hartlepool, as a nice springboard into the Swindon game.

With a huge allocation for the game, that’s sure to be one not to miss out on, and it could be yet another turning point for our season.