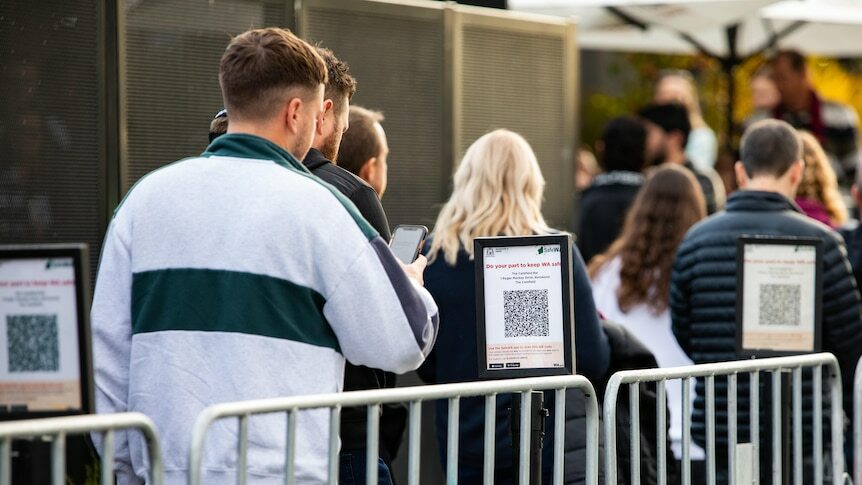 Not enough Western Australians are using the Safe WA app and experts fear it could delay the state's response to a potential outbreak.

WA Health data showed the number of check-ins each week peaked at more than 17 million in the week after the first lockdown of 2021, when the app became mandatory almost everywhere.

But ever since, it traced a predictable pattern — spiking with each lockdown, then slowly trickling down over the weeks that followed.

Recently, check-ins have averaged about 10 million per week – just above half the rate of the strongest-ever week.

"If someone uses the Safe WA app I can see — really within seconds of notification — who's been to that venue [and] we can start getting information out within minutes," said Ben Scalley, head of WA's contact tracing workforce.

"That's very different to if I have to look through other data sources to try and track someone down," he told ABC Radio Perth.

"That can be the difference between infecting no one and infecting a number of people."

Earlier this week, WA's vaccine commander and police commissioner, Chris Dawson, said complacency with the app was an issue, but not a priority.

"I certainly don't have a workforce which is running around [fining] people," he said.

"We just need to get through this last leg, get people vaccinated to a sufficient level that we, hopefully, will be able to get to a comfortable situation like we were pre-March last year."

But with the threat of a Delta outbreak still hanging over the state, epidemiologist Archie Clements said the information the app provides had become even more important.

"It is important that the contact tracers are able to mobilise as quickly as possible and with all the available information."

Professor Clements said the app would gradually decrease in importance over time, but for now, it remained a critical part of keeping WA safe from COVID-19.

While the trend was not what authorities and experts had hoped for, Professor Clements said few were surprised.

"The public responds when they see a threat that's immediate to them," he said.

"When that threat is perceived to be resolved or to decline, then I think the level of engagement is quite ephemeral and the memory is quite short."

Shane Rogers lectures in psychology at Edith Cowan University and said the threat needed to be close to people to encourage them to act.

"For a lot of people that's where a lot of their concern is focused on, is on their friends and family getting the virus."

WA's success in sheltering its population from the worst of the COVID pandemic has made people too complacent, according to Dr Shane Rogers.

"It might be making people feel perhaps even safer than we potentially are, so it's a balancing act and it's a tough one," he said.

Professor Clements said even with stronger messaging from the government, there was a chance usage would not increase substantially until positive cases started circulating in the community.

More can be done to change behaviour: marketing expert

Dr Rogers said another strategy to boost public compliance was to improve the process.

"Because it is a bit of an inconvenience, if you can make it as little an inconvenience as possible, that is going to help definitely with people's willingness and openness," Dr Rogers said.

Katharina Wolf, the head of Curtin University's School of Marketing, said changing the behaviours associated with the app was just as important.

"It's now normalised to just march past," she said.

Dr Wolf said part of that could involve overhauling the advertising associated with the app.

Among her suggestions were highlighting communities where usage rates are particularly high or low, or using people in advertising who the community identifies with.

"We really need those community leaders and community influencers who can model that behaviour," she said.

"It's really about using those people who are more like us, who we want to be like."

She said football players would be high on her list of suggestions.

"It's about using that kind of star power and influence as opposed to relying almost exclusively on politicians or actors or scientists in white coats."