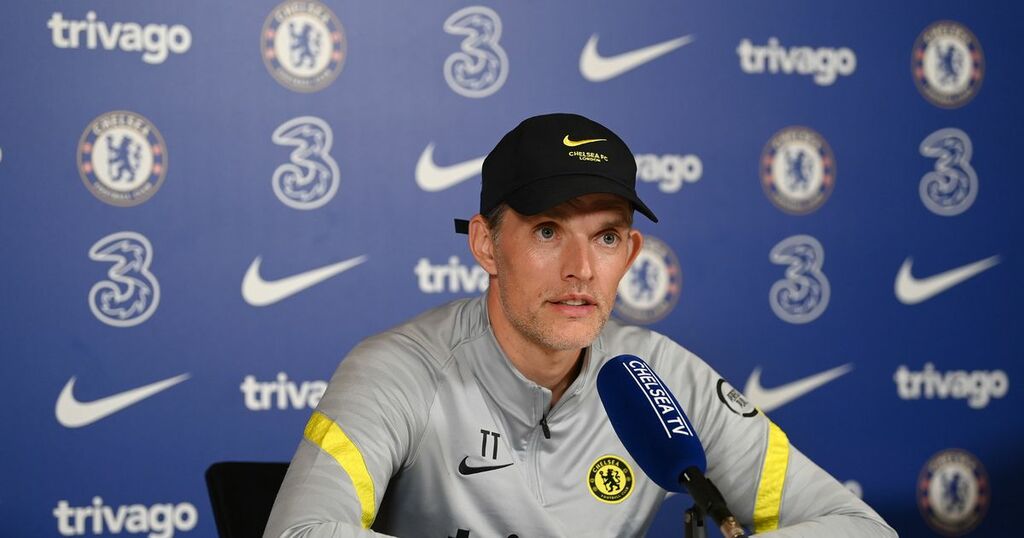 What is the latest team news?

"Unfortunately we have two players out: N'Golo Kante and Christian Pulisic. They came back both injured. Well, N'Golo got injured against Liverpool and still suffers a little bit. We'll try with N'Golo for Tuesday, this looks pretty good.

"For Christian, he came back yesterday [from international duty] on crutches. He has an ankle injury with about 10 days out.

Romelu Lukaku mentioned he had a thigh problem while on international duty, is he alright?

Are you frustrated with the situation regarding Thiago Silva and him potentially not being able to play against Aston Villa due to the Brazilian FA?

"Not only with Thiago but with the situation, yeah. Maybe not football but the world itself is not the same with travelling and restrictions. If you try to go home during the national break, or if I want to bring my family over, it gets more and more complicated.

"Yes, of course, the clubs want their players to play and the national teams as well. And the players also want to play, don't forget that. But if it ends up that players who can't play in their national team are suspended for their league games, that makes no sense. Not for the players, clubs, national teams, fans or football.

"Me personally, I think it could be a solution to move games from red-listed to green-listed countries like we did with the Champions League last season. So this was a solution where games could be played, so maybe we can find a solution like this.

Chelsea managed to complete the loan signing of Saul Niguez late in the transfer window. How please are you with that?

"We have the chance [to make it permanent] which is good. Now it's on us and the player, and we can get to know each other in detail and see if this is a good fit.

As you know, we agreed for Billy Gilmour to go to Norwich to have more minutes at the highest level, he was our fourth midfielder last season. Now with the Covid situation and the Euro and Copa America, I personally was a bit concerned to go into the season with only Jorginho, N'Golo and Mateo [Kovacic].

"Not because of a lack of quality or character; I'm the happiest coach I can be to have these three guys. But it's a bit unpredictable, we have a Club World Cup to play in December and nobody knows exactly how many games there are to come. Normally two of those three guys always play, so once you have one injured or suspended you already are in danger of overloading the players.

"We were looking, not desperately, but we were looking for alternatives. Saul has been on the radar for Chelsea for many years. I've known the player for many years and I fought at other clubs for him but it wasn't possible. So when the situation was that we could have a loan, we were excited about it.

"He has exactly the type of profile we need to give Jorginho and N'Golo a break they need sometimes. He's a good fit with Mateo, with Jorgi, and N'Golo. He's a very strategic player, has a good passing ability, does a lot of volume of work. I think it's good he comes from a tough club and I am absolutely happy.

"We don't have the biggest squad in terms of numbers – we can feel it now without two players, we end up thinking about who is in the 18 – but we have a strong squad in terms of quality and character. I'm very happy Saul is a part of this."

Did you feel you were in a no-win situation over Thiago Silva given the restrictions?

"If we had sent him, he would've been out for ten days in a hotel room, not able to train. I understand in this moment because these are the travel restrictions, there's no way to go around it and nobody wants that.

"The solutions and discussion where we end up right now, I don't know any fan or anybody who is involved in this game can really understand the positive effect. There is simply none.

"The chairman is still in negotiations and I'm still hoping and positive. He is not out yet officially."

Where do you stand on the World Cup being played every two years?

"I've only read headlines, I don't know the idea behind it and before I comment I'd love to give everybody the chance to explain how and why. I think at the moment, it's very hard for every club to accept that after the Euros, Copa America, there's so quickly an international break with three matches for the players.

"It's very hard to accept because people want to see the top players on the pitch. If we only increase only the games that will not happen in the end, we will not see top performances. That is not for the benefit of the game. I'm worried more about the actual situation than a revolution in terms of a World Cup every two years.

"If the idea is well thought through – maybe they have presented the idea already, I've not heard it – but I've not made my mind up.

We've seen the benefit of young players going abroad: Mason Mount went to Vitesse for example and Jude Bellingham is at Borussia Dortmund. Why do you think the Bundesliga is such a good breeding ground for young talent, and particularly young English players?

"There's a lot of young players going to the Bundesliga. Why? It is a good question. It is a young league that's very well structured. They are brave enough to let the young players play. Maybe the competition around the clubs is not on that highest level like the Premier League. This is more a less what you look for when you give a player a loan.

"Is it a well-structured club? Is it a good structured league? Reliable in communciation, reliable in what they demand from their performances, it is a high intensity of football. If you have English players there. You can be sure they play a physical game. In the end, everyone needs to find his own path and adapt to his own situation. You cannot say you go to Vitesse and Dortmund and you end up in the Premier League.

Has it been hard preparing for tomorrow's game with many players only returning today?

"We don't do it for the first time but it still feels awkward and it is demanding because normally you build up a feeling for your group and players in what they need and don't need. You navigate through a week like this with six or seven players here for two weeks. You have a little group so you fill it up a little bit with academy guys if they are here.

"Yesterday and today, the building was more or more full. Today, was the first day, we have done it but it is not the nicest situation. You lack the feeling and rhythm. Everyone has come from different trips, different styles of play, demanding games and experiences.

"But in the end, once we enter the meeting room and watch video sequences from us and Aston Villa, I demand full focus and motivation. This is us and this is what we are up to.

"We are playing at the highest level and we play for Chelsea. When you arrive on Friday morning, no matter if you are tired, you accept it. That's no matter how tough your trip was, accept it and be fully focused and motivated. This is how I felt the team on the training pitch and we pushed them.

"Not to give the wrong impression that we are still too soft and talking too much about how hard this is. This is an obstacle to overcome, the challenge for tomorrow and we want to be on our highest level and we will not accept any excuses from us.

There's another international break next month, and one in November. Are there simply too many games to play now for players?

"It is the development over the last years. The Nations League was in between and even another competition out of it. My personal opinion is that it doesn’t help the quality. I don’t know how, but there should be a compromise to have less games of higher quality to protect the players. Nothing else."

Cristiano Ronaldo signed for Manchester United before the end of the transfer window. Does he transform them into Premier League title challengers?

"They were before (title contenders). For me, they were before because they had a fantastic transfer window and they are a super hard team to play against and to beat in the last season. They were close to winning a European trophy, they were so close in the league, second place, so they were already because they became stronger even before the arrival of Cristiano Ronaldo.

"This is what we also look for when we buy players that they bring a new spirit. We have guys like Trevoh Chalobah, like Saul, like Romelu Lukaku. They are new in the group and they are hungry and when players like this arrive in a club it is a huge example.

"He leads by example Cristiano and makes things more complicated for us, but very, very exciting and we will not change our ambitions because of it.

Timo Werner hasn't featured since starting against Crystal Palace. Do you think he can play alongside Romelu Lukaku?

"We are very happy that he played (for Germany) and from here we go. We have a squad where we are not too many players, but players with high quality and high ambition and Timo is a guy we count on and it is absolutely necessary that we have someone on a high level and he can be decisive for us."